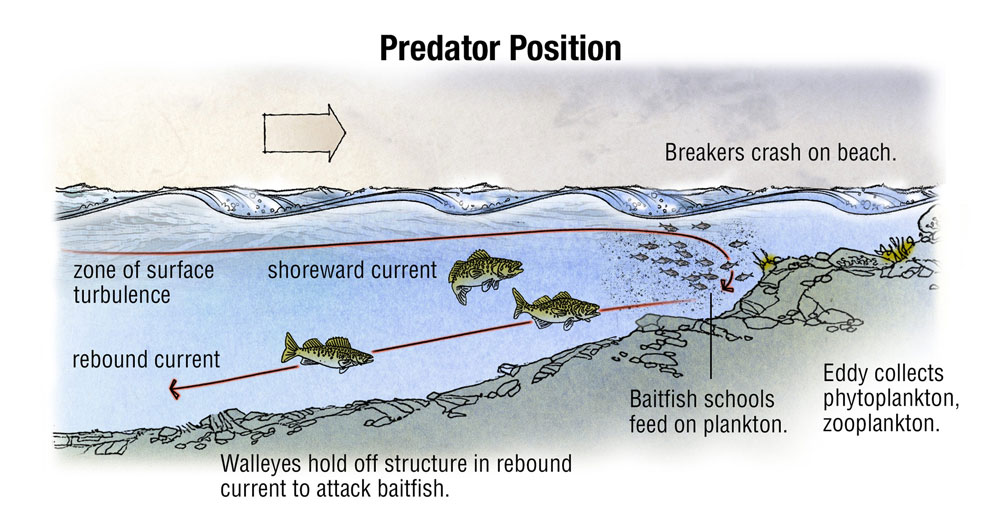 The strength and direction of the wind is influenced by changes in atmospheric pressure. As a result of the movement of air masses from one region to another, the weather changes. Wind or calm never just happens, out of nowhere. And they are the forerunners of the movement of cyclones and anticyclones.

The well-established opinion about the east wind and the absence of bite is not entirely unambiguous. And opinions on this matter are darkness. Any wind is a change in the weather, and with it pressure and, accordingly, the activity of fish. Plus, different fish react to the wind in different ways.

If the wind from the south direction changes to the east after a long summer heat, the fish biting can be activated. And if with a decrease in water temperature, wait for the predator to come out.

And with the transition to the northeast and further north, especially with an increase in wind speed, on the contrary, it will worsen. After all, such winds are the harbingers of a cold front and low pressure.

Again, a weak to moderate east wind over several days can be favorable for biting.

By the way, here is a video in which the author correctly tells everything about the weather and biting. Including about the wind, with an emphasis on the patterns of life of underwater inhabitants …

That is, it is impossible to say that the fish does not bite in the east wind.

It is also necessary to take into account its speed, variability and the weather in general, as well as the time of the year, the reservoir and the place of fishing.

In steady weather, pressure and wind, regardless of direction, the likelihood of a good bite is greater than with a changeable one.

Pike and perch can be perfectly caught on a spinning rod in autumn with an easterly wind, and in summer they can not even show their presence.

White fish are more susceptible to changes in wind direction. If you go fishing during an easterly wind, the probability of a good catch is minimal for one banal reason:

An east wind has blown – wait for a change in weather and a decrease in pressure. Ahead is the transition to the northern direction and the cold front, and with them the fish begins to “get sick”.

Only experience and study of the reservoir will bring results, and there is simply no recipe for all occasions.

How does the wind affect the bite?

So, if the north wind blows and a cold front forms (a cyclone is approaching), the air temperature and atmospheric pressure decrease – the fish stops pecking.

If a strong and gusty westerly wind appears, the fish is also inactive, it bites poorly and is caught. With the exception of perch, crucian carp and tench, which sometimes peck in this weather.

In moderately windy weather, when there are ripples on the water, predators are well caught with artificial baits. Carp – crucian carp, carp and bream and the ubiquitous bleak peck well along the border of muddy and clear water.

On days with squall, strong winds, with constant bad weather or changing weather, there is nothing to do on fishing.

The figure shows a diagram of the correspondence between the biting of white fish to the direction and strength of the wind, which works with almost a probability of 75-90% in any water body.

Moreover, strong, squally winds of any direction always “kill” the fish biting. O is always preceded by a change of weather. Conversely, weak winds, even in the “red zone” of the pattern, contribute to the activity and biting of fish.

The motionless hanging cirrus clouds, clear summer nights indicate the passage of the anticyclone. During this period, all fish are caught and active in the reservoir. Mostly from evening to morning. However, during the day, especially in the heat, there is no bite or it is weak.

But in winter it is the other way around. On frosty days in calm weather or with weak westerly, south-westerly or north-westerly winds, fish always bite.

With an easterly wind, the fish bite gradually decreases. Usually, such a wind is a harbinger of an approaching cyclone, especially with the appearance of a northeast wind and further north.

An experienced angler can always use the wind to determine the weather in the coming hours in a simple way.

If in front of the left the sky darkens and approaching clouds are visible, then bad weather is approaching. Wait for cold weather (cyclone). If the sky is clear and cloudless, the weather will be good (anticyclone).

In a cyclone, winds blow in a circular trajectory, moving air masses to the low pressure zone, to the center. In anticyclones, the opposite is true. The high pressure zone is in the center and the wind moves the air from the center outward, also in a circle.

The figure shows the patterns of movement of air masses and wind directions during cyclones and anticyclones.

With a cyclone, condensation of water vapor occurs. Therefore, the weather deteriorates. The wind intensifies, rains and thunderstorms begin, the temperature drops – in summer, in winter – snowfalls and blizzards come, cloudiness and thaws appear. Air mainly moves from west to east at a speed of 20-80 km / h.

Therefore, a cyclone moving across the terrain from west to east first reveals itself as a southerly wind. Then it goes into the southeast, north-east and north. Atmospheric pressure drops.

The anticyclone is exactly the opposite.

It moves in the direction of the general air movement from west to east, at a speed of up to 30 km / h. When the speed of the anticyclone disappears, there is a drought in the place where it stopped during the summer months.

The anticyclone manifests itself as a northwestern or damping northerly wind. Further, multi-day little or cloudless weather sets in and ends with an intensifying southwest or southerly wind.

What is a clutch on a reel
How to determine the age of a fish
Who is a fisherman
Tags: affects, direction, Fish, nibble, strength, Wind