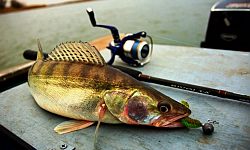 The ability to quickly find fish is perhaps one of the most important components of the skill of a jig spinning player. And if, at the very least, you can master the fishing technique in a month or two, then the path to unraveling the patterns of searching for a predator is usually long and thorny, in a nutshell you can not say about that. Since it is impossible to embrace the immensity, that is, within the framework of one article it is impossible to consider the search for a predator as a whole, let us dwell on one of its aspects – actions at an already found, promising place, in your opinion. We’ll clarify: we will only talk about zander and one interesting feature of its behavior.

How do zander usually look for?

I think I will not be mistaken if I say that in most cases everything happens according to the scenario below. The fisherman arrives in a boat to some place where, according to his information, there is a zander, in sufficient quantity. The boat is anchored (at best, according to the readings of the echo sounder, at worst – “from the flashlight”). Then follows twenty to thirty casts in different directions. If there were no bites – the place changes, if there were – some more casts are made, after which the place still changes. Sometimes it is possible at the same time to catch one or two fanged. And this continues until the angler, by a happy coincidence, is at the right time in the right place. It seems that the tactics are correct, but you can save time and fuel by not randomly wandering around the pond, and by looking for the pike perch somewhere closer – sometimes literally in your face.

We once fished on the reservoir. We checked all the known places – the result is zero. In the end, my comrades, fishing from another boat, managed to catch one "string". Since there was no longer any desire to rush through the expanses of water, we decided to stay in place for now. And not to no avail – the comrades caught a couple more lumps and earned a few bites, I didn’t have any bites. I began to change places, that is, to revolve around them, however, not approaching the casting distance. Near the place of fishing there was a rather steep dump, and it simply infuriated me that I could not anchor – the wind was blowing from the shallows and the boat pulled to the depths. Managed to anchor on the shallows. I caught one pike when posting from a shallow depth, then – not a bite. Meanwhile, my comrades caught at random.

Again, I began to try to anchor myself in a dump. Finally, after the tenth or fifteenth attempt, the anchor caught on some snag, and the boat ceased to demolish. The first test cast is bite, then the second, third! The fourth turned out to be productive, and one and a half kilogram pike perch soon moved to the cage. The second cast is the same, the third, fourth are all productive. Then it was already my turn to my comrades to get nervous and change places. But no matter how they stop, not a single bite. Ultimately, I agreed that they tied their boat to my side to side. Only after that they began to bite. Moreover, the one who was further from me at least two meters, the number of bites decreased by three times. This is only one of so many cases, we can say that such things happen regularly.

Imagine: a pike perch pecks at a distance of thirty meters, while it is worth moving only a couple of meters to the side, as the bites stop. Sometimes the termination of bites is even caused by the transition from the bow to the stern of the boat or by turning the top of the rod in the other direction. Somehow my friend and I caught a small groove about 70 meters long and about 20 wide. Each was in his boat, and they stood at a distance of about two meters from one another. My companion has zander after zander, I don’t have any bites. One could give a reasonable explanation of what is happening if the bites followed a short distance from the boat – all of a sudden my friend’s bait passes through some hole or tubercle where the zander is concentrated! But the fanged pecked at the first steps of the wiring, that is, from a distance of at least 40 meters, while we were literally throwing at one point! It is clear that the bait passed the pikeperch parking zone at different angles. But if you make simple calculations, it turns out that the difference was only about 3 degrees! It seems that the predator sat in a pit with a protractor! From all this it follows that almost every place in which you are sure at least sixty percent, you need to examine in detail.

Consider a few typical places and their fishing patterns based on what was said above. Moving a boat every meter or two every time is far from always advisable, and tiring. Therefore, the optimal distance to move (if there is a need for short movements), we will consider six to seven meters. At each place, it is possible to experiment further with the direction of the wiring by moving the top of the rod to the right or left. No matter how funny it sounds – it happens that such actions give good results, especially if the pike perch is not far from the boat. At first glance, the movement is very small, but the rotation of the rod by 180 degrees is the movement of its top by at least four meters, and if the rod is long, then more, Bait "ditch"

Here, when searching for zander, it makes sense to move in stages, meter by meter. only across the ditch, casting at various angles to the flow. Longitudinal movements are advisable only at a distance approximately equal to the casting distance. If the pike perch does not like the speed of posting (that is, the case when it would make sense to make short movements up or downstream), you can not change the anchorage but experiment with the weight of the head. Even if you do not change the weight of the head, the flock is still likely to gather under the boat, where the bites will begin – the pike perch has the ability to "see off" the bait and after that do not return to the place of initial parking.

You can act differently – make short movements along the ditch, again, casting at different angles to the flow. Only in the first case the casting direction will be closer to the longitudinal, and in this case to the transverse. I cannot say which method to prefer. In some cases, it is better to bite when posting against the current, in some – transversely. It even happens that at the same place when posting against the current on almost every cast, small zander bites, and when posting across the stream, only large, but much less often. In each new place, it is advisable to try to catch two or three different baits, better “fighting” and proven.

Here, movements of six to seven meters will not bring to good – it is better to move approximately the distance of casting. Only in no case is chaotic. It is necessary to systematically catch site after site, and try to ensure that each of them is caught from at least two positions – against the stream and across the stream (of course, not strictly, but at different angles). If the pikeperch showed itself even with an indistinct poke, at first it is better not to move, but to experiment with the size, type and color of the bait, as well as with the weight of the head. If this does not bear fruit, you can return to the original bait, and then start the search with short movements, catching the area where the zander is found, from different positions. At each new point, it’s also good to experiment with baits.

Here, as practice has shown, the best results are obtained by short displacements across the edge and displacements along it to the casting distance. In this case, casting is best done with a “fan”, that is, at different angles to the brow. This is due to the fact that pike perch on the edge is often demanding on the choice of position for casting. Just such a case was described at the beginning of the article. Moreover, this does not depend on the direction of the edge. This pattern manifests itself on both longitudinal and transverse brow. On the transverse brow, where the dump goes to the depth downstream, sometimes castings against the current are sometimes effective, followed by pulling the bait aground to depth.

Despite the fact that these irregularities of the bottom relief are directly opposite, so to speak, their catch pattern is approximately the same, the best point is in the middle, if, of course, the pit or hillock is small in size and allows you to completely catch them from one position. If there is a current at the place of fishing, then the second “lethal” point is above the pit or hill. You can also catch them with casts across the stream from different sides. It is better to start short movements only after detecting the zander, in the usual mode it is enough to change the place three or four times. If the pit or hillock is large, it is best to move along their borders in the same way as the brows are caught.

Single snags on a flat bottom always attract fangs. Everything here is not so difficult – it is better to catch them from all sides (if the strength of the stream allows). If the current is very strong, then casting towards it will most likely not be productive. Very often, short movements give the result here. It’s worth spending time – these are very promising places. Wrecks and other single objects located at the bottom are also caught.

All these schemes are by no means a direct guide to action, each place has its own characteristics, which makes certain adjustments to the fishing plan. Often in the same places, the fanged one shows the same inclinations. Somewhere he pecks only when casting across the stream, somewhere only when casting with the stream, in one place it is enough to make ten to fifteen casts to determine if there is a pike perch, and the other must always be worked out in great detail. All this needs to be recorded in memory (and even better on paper) in order to simplify your life in the future.

Hunting for asp
Pike perch on a winter night
With a feeder behind a river bream
Tags: search, tactics, zander