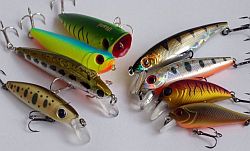 In 1935, a certain Finn Lauri Rapala, who made a living by fishing in Lake Payenne, one of the largest in Finland, cut his first wobbler out of wood with a penknife. The rumor about a catching bait quickly spread across the country of a thousand lakes, and in 1949 his entire family was forced to engage in the production of lures. A very instructive example of how the ingenuity of one person eventually turns into a world-class business. However, the history of the creation of this bait dates back to the end of the eighteenth century, when the first of the famous wobblers in the USA appeared, and at the beginning of the nineteenth century their industrial production was already established. Currently, wobblers are produced in many countries of the world, including Russia. At first glance, the diversity of these lures is quite large. But in general, they are designed according to one principle, with rare differences.

The body of the wobbler can be made of light wood (for example, balsa) or plastic. In the second case, the bait has a cavity. Inside, along the entire body, a metal rod of wire is stretched with a mounting eye in the bow for attachment to a fishing line or leash and with the same ears for attaching hooks. The wobbler is usually equipped with one tee at the back and one or two at the bottom. Wobblers made of wood are coated with a thin plastic layer before painting to ensure a smoother surface and to prevent moisture from entering the wood part of the body. Wobblers are divided into floating and sinking. The latter are heavier than lead.

The most important element of a wobbler is its nose plate, made of plastic or metal, the purpose of which is to control the course of the bait and determine the depth of its wiring. The wiring depth depends on the insertion angle of the plate with respect to the longitudinal axis of the housing. But for some models, this plate is movable and allows you to change and adjust the depth of the wiring depending on the fishing conditions. A number of wobblers have no blade, however, the shape of their bow is designed so that the depth of diving depends on the speed of the wiring. An example is the Rattlin Rapala with a sloping frontal part that can go down to a depth of three meters. The ring for attaching the fishing line of this wobbler is not located in the bow, but in the upper part of the body.

Wobblers are attached to the fishing line using a special loop. It is impossible to fasten with a tight knot, as this can disrupt the course and game of the bait. In the event that it is possible to bite a pike, a soft metal leash is required, which is attached through a carabiner or clasp. A hard leash negatively affects the game of the wobbler and can negate its dignity. Floating wobblers can be roughly divided into three main groups: surface bladeless (stick bates, poppers), fine-diving and deep-diving. The most universal are floating wobblers with a nasal lobe. They can be both single-component and two-component. According to many experts, “composers” provide a more “lively” game. Wobblers with propellers in the bow and tail, which most strongly affect the side line of predators, should also be highlighted. A floating wobbler, like any other spinning lure, however, has its advantages and disadvantages.

Pros:
– when fishing "for a splash", the bait immediately attracts the attention of a fattening predator, since it is brought in almost silently unlike the "glands";
– when fishing on the course, both from the shore and from the boat, the floating wobbler can be released along the stream to a considerable distance, just to the place where the predator beats fish fry;
– virtually no fish gathering after hooking, which can not be said about other baits, especially “unhooked” ones;
– the possibility of fishing in the upper layers of water, in places inaccessible to other baits;
– the possibility of step wiring with a minimum of hooks at depths of up to 6-7 m.

Minuses:
– Wobbler, like any other volumetric bait, is not designed for long casts;
– fusion of the bait downstream and most often slow wiring deprive the angler of efficiency in catching a particular section of the reservoir;
– The high price of branded wobblers. This, in turn, puts forward a requirement for the fisherman – to catch only from a boat and to have 2-3 reliable cuts with him;
– Wobblers made of balsa wood after catching several toothy predators (especially zander) require redecoration.

When fishing on overgrown pike shoals, a large chub or perch is attacked by a finely-wobbled wobbler or suspension (having zero buoyancy) in most cases when you stop the reel, as well as when surfacing or at the moment of repeated diving. But sometimes there are bites on a stationary wobbler, which only sways slightly on the wave. Experienced spinningists with the help of the rod end achieve such a skillful game with bait that the phlegmatic tuned predator does not stand up and rushes to the attack. For a high-quality game, it is important to have a good idea of ​​the behavior of small fish living in this pond. When fishing from a boat, very good results are obtained, as a rule, from the shore in depth.

Wobblers, leaving in the process of posting to a depth of six or more meters, require special techniques and fishing tactics from the fisherman. And since they are designed to catch a deep-sea predator, all elements of the bait must be distinguished by increased strength. And this especially applies to the places of attachment of tees and fishing line. On some models of wobblers, for example, the mounting ring for the fishing line is located on the bow plate and is not connected to the “fittings” inside the case. This is the worst option – when catching a trophy predator there is a big chance to be without fish and without bait. As a rule, deep-sea wobblers in their name have the word “deep” (depth): Deep Tander Stick, Deep Trembling, Deep Runner, etc. In contact with bottom obstacles, such baits, as a rule, repel them. Deep-sea wobblers are certainly preferable to catch from a boat. Bites occur in most cases when the bait touches the bottom. The main trophies: pike, zander, large perch.