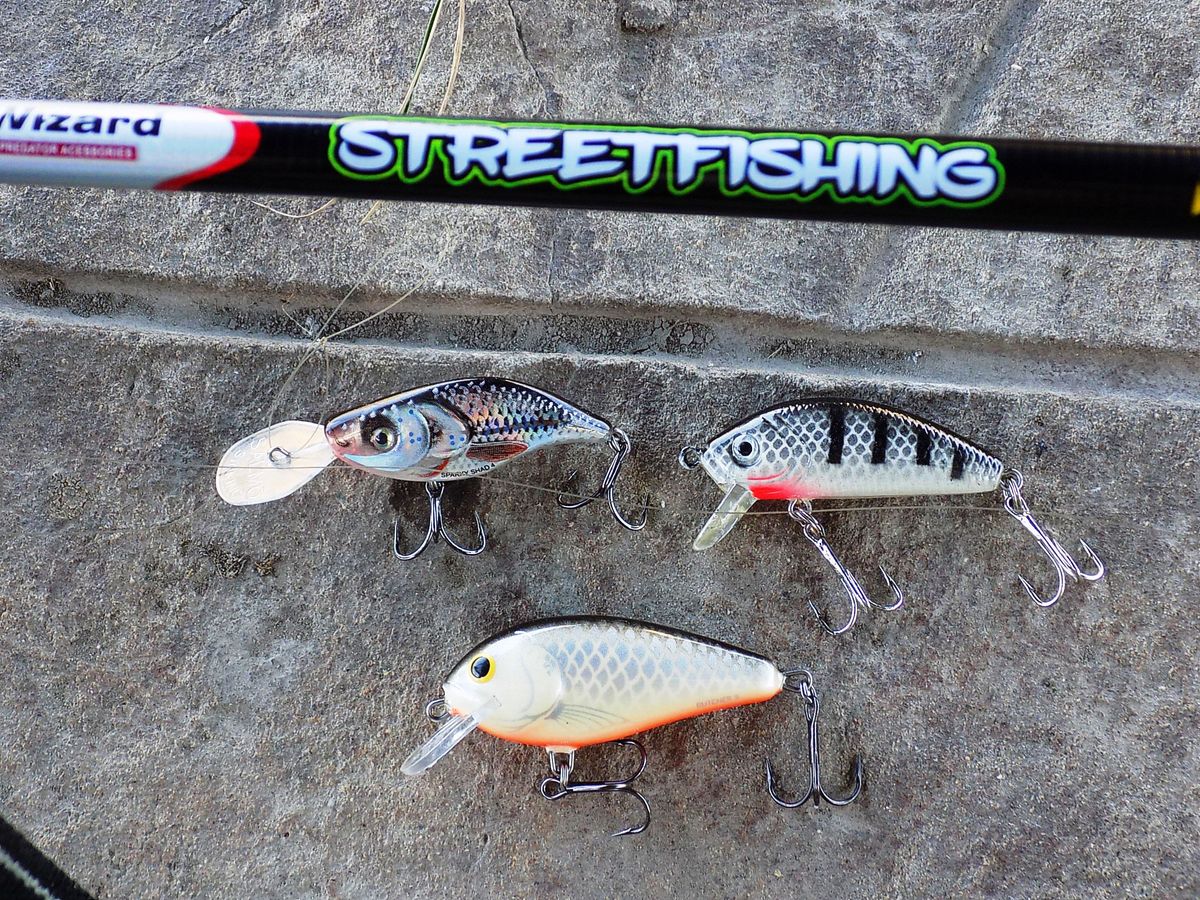 Many cities stand on rivers, and although fishing in nature is much more pleasant, comfortable and familiar, but for a city dweller who does not always have the opportunity to fish in “normal” conditions, a visit to the city embankment is quite capable of relieving the fishing itch. Somewhere the height of the embankment may be small, but somewhere, as, for example, in the center of Moscow, the parapet rises above the water by 5-6 meters. Fishing with wobblers here runs into a number of seemingly insurmountable difficulties, and usually in such places people fish with jig rigs. However, my experience allows us to assert that in fact, even with wobblers, you can quite successfully fish from a high parapet.

First, let’s talk about blade lures. The blades of different models may differ in shape and size, which affects the performance of wobblers. In our case, the most important parameter is the maximum depth for “normal” conditions, which is almost always indicated by the manufacturer on the packaging. When fishing from a high bank, the line goes into the water at a steep angle, and, therefore, the bait will go higher than it is “supposed to”. This is definitely a minus. But if the depth at the place of fishing is relatively shallow and the visibility is sufficient, the predator will definitely notice the bait. How he will react to it is another question. The second, much more significant point is the effect of the wind. The stronger the wind, the more negative influence it has on the quality of the bait feed. If its direction is the same or opposite to the cast, it is still half the trouble. The arc of the line, of course, will take place, but correct posting is quite feasible, and when fishing from the windward bank, the casting distance will also increase.

Another thing is when a strong side wind blows, which can create insurmountable obstacles and even carry the bait to the surface. Sometimes, however, it happens that perches and asps rush after a wobbler planing “under sail”, but anything can happen on fishing, and you shouldn’t count on such behavior of the fish. In such conditions, only the fact that the river usually winds can be saved, which means that “there, around the bend,” the wind direction may be more appropriate, and there is a reason to continue searching for fish by changing the place. Taking into account the two factors discussed above, as well as the depth and distance from the coast of the fishing point, the bait is selected. First of all, for high-quality wiring to become a reality, the wobbler must “catch” on the water. In my opinion, in the conditions described, it is preferable to use sinking models, suspenders, and also “dips” with a relatively large blade. In more favorable conditions, shallow-water floating models also work well.

The main object of parapet fishing is perch, so I made the main emphasis on wobblers, animated using various tweaking options. When the perch is concentrated near the parapet, casts should be made at a sufficiently sharp angle in relation to the wall so that the bait travels as far as possible in the prospective zone. Very often the perches chase and attack the wobbler until the moment when it, “fleeing” from the gluttonous minke whales, is ready to “climb” the wall. Sometimes it is helpful to pause at the last second, during which the grip occurs. At a short distance, Damiki Pirami 55 SP and its floating version work really well for me. Unfortunately, the use of these models is limited by their small mass and the presence of a short blade: when the wind intensifies, they hardly cling to water. In such cases, more “blade” lures come to the rescue, especially the Duel Hardcore SH-50SP, which is also good at medium fishing distances. Due to the wide enough blade of the original shape, it cannot be brought to the surface even in the presence of a fairly strong side wind. For the same reason, it requires a softer wiring than the small blade model. Too hard, “perch”, twitching is not for him, however, as for most long-bladed “dips”.

It should be noted here and Rigge S-Line 46S MDR from Zip Baits. In addition to perches, asps, pikes and even peaceful fish showed interest in him. I use two tweaking options with it. The first is aggressive jerks of different amplitudes, without pauses. Due to the elongated blade, the wobbler moves while you do not understand how – it falls to one side, turns at different angles, etc. But do not let this scare you: with such chaotic movements at a decent speed, it turns on even a passive perch. And one summer, one of the three crucians burrowing in the silt responded to such a posting, purposefully following the minnow. To check if this was an accident, I repeated the cast – and the 600-gram crucian carp grabbed the wobblers almost completely, sitting on both tees! True, unlike him, the other two from this flock turned out to be really “peaceful”.

Another option for feeding this bait is soft twitching with and without pauses. The amplitude can also be different, but with short, unsharp jerks with pauses, the result is better. The wobbler sinks quickly enough, so the pauses should not be delayed. When fishing on shallows stretching towards the channel, excellent results are shown by various long-range minnows weighing from 5 grams, as well as Zip Baits Rigge models equipped with a long-range casting system. With a medium-sized blade, Jackall’s Squad Minnow 65 SP easily grabs onto water, and its rather plump body for a minnow sways from side to side. This game also does not leave indifferent perches. The Liberty LB Minnow 80SP, on the other hand, has a small blade, a sweeping shape and equally impressive flight performance thanks to the presence of rolling metal balls inside. This wobbler perfectly catches a different-sized perch on chaotic twitching, and the softer version of the wiring, when the bait rhythmically prowls right and left, is clearly to the taste of the Moskvoretsk pike.

It may be an accident, but on average I have come across larger perches on the Strike Pro JL-035SP 70mm suspender than on other lures. A decent range and an appetizing play on aggressive dashes are the ingredients of this wobbler’s success. A couple more excellent flyers from my arsenal are members of the Pontoon21 Gaga Goon family. Both are in the S-SR version, a slight difference only in size – 55 and 60 millimeters, but in weight – almost one and a half times. Both of them play the same twitching game similar, but not the same! This is definitely worth keeping in mind. In addition to the range, they have another important advantage – their own fall game during pauses. So far my record for perch for them is 620 grams, but I am sure that this is not the limit. Cool wobblers!

Much has been written about the catchability of Rigge by Zip Baits. I can only say that they are just as good at parapet fishing. On a perch, both the floating Rigge 56F Deep and the sinking (S-Line) 56 and 70 millimeters long work fine for me. But on the other two wobblers, perhaps, I will linger. They are produced by the Japanese company ITO Craft, both sinking, both very “volatile” for their masses, although they are not equipped with special systems to increase the casting distance, both perfectly and stably catch perches of different sizes. The first – Yamai 50S (3.5 g) – on a sharp twitching goes into such a “raskolbas” that, probably, only a very well-fed perch will not be tempted by his game. This wobbler has repeatedly beat the generally recognized favorites to zero. I remember that on one of the fishing trips he over and over again lured single and schooling perches from the rocky edges and from the grass.

I changed it to Rigge 56 several times, but in vain – even there were no fish, and Yamai continued to fish! A similar ratio in striped and to another model from ITO Craft – Emishi 50S (3.8 g). Due to the flatter body from the sides, it also has its own play on the fall during the pause. Both wobblers from ITO Craft, in my opinion, have only one drawback – it is very difficult to find them on the Russian market. Of course, in addition to the lures described, I also used other wobblers, but the mentioned ones showed the best results. Perhaps someone will have completely different favorites. The main thing is to choose the wiring that would provoke the predator to attack. After all, the fish is caught not by the bait, but by the angler.