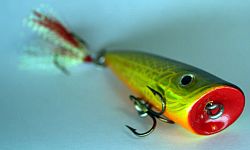 Wobblers for fishing in the upper layers of water

If in early spring, when the water is still cold enough, it is best to use slow wiring and calmer lures, then with the arrival of heat, predatory fish become more aggressive, and under these conditions, faster and noisier wobblers are required. They work better. In shallow waters in calm weather, an elegant game with bait is possible and necessary, but in deep water or where aquatic vegetation is located 1-1.5 m from the surface, you can safely use one of the fast, excitingly predatory wobblers. If you persistently want to catch such baits and aground, just keep them in short jerks or tell them wave-like movements using the tip of the rod. Consider some varieties of wobblers and other lures designed for fishing in the upper layers of water.

Although classic wobblers such as Original Rapala can be attributed to jerkbaits, since similar wiring is required, a real jerkbait is still something else. First of all, this is pike bait. However, some companies specializing in the production of pike jerkbaits also produce small models that are quite suitable for catching perch. "Syuik" (Suick) – one of these wobblers. This floating model during the wiring moves in jerks, ducking, and then slowly floating up to the surface as long as you control its seductive “dance”. At the same time, the metal tail allows the bait to dive deeper. Syuik and other pike jerkbaits have a wider and more “wandering” move than classic floating wobblers. Most often anglers use models ranging in size from 14 to 25 cm.

Around the end of spring, with a decrease in the level of water and its enlightenment, many spinning practitioners practicing wobblers prefer stickbates. These baits attract predators with seductive rushing movements: diving, jumping, splashing. Cigar-shaped and pencil-type wobblers are characteristic representatives of stick bates. Both of these forms require a well-established wiring technique and serious efforts from the angler for its best performance. Stickbaits are especially effective when they scour from side to side while posting, resembling the movements of a dog walking on a leash. In English, this wiring method is called walk the dog. The pencil type of wobblers has a thick and round body in cross section, which goes to the tail on a cone. They have a slightly slanted front part and also rush from side to side during wiring. The head of such a wobbler more actively perturbs the surface of the water when diving. As a result, when jerking, these baits have a very exciting effect on the side line of predators.

There are two types of posting stickbates. In the first case, you can always keep the tip of the rod at an angle of about 20 degrees to the surface of the water or slightly higher; that way you could work with, say, a plastic worm or a twister. To work properly with stick-bait means to withstand as many pauses after casting as possible, giving slack to the fishing line. If you keep the rod low, raise its tip 20-25 cm and lower it down again. When choosing a slack, try to inform the wobbler of the movement in which it will rush from side to side. A few slow motion, the work of the reel – and again the transfer of the rod to its original position.

Another type of stickbait job is called "half-step work." Its essence is that at first you make a jerk with the tip of the rod, as a result of which the wobbler goes to one side. But after you make a new leap, adjusting the movement of the bait, it starts to slide in the same way in the opposite direction. Each half-step of the wiring allows the wobbler to move forward to the angler, and not only from left to right and from right to left. In addition to fishing in casting, stick bates can also be successfully used in trolling, especially when predators go hunting in the upper layers of the water. During wiring, you must work slowly with the tip of the rod. The results are often amazing.

These wobblers usually have a short body with a recess in the head. You can recommend three types of wiring when working with these baits. When fishing with poppers, many anglers use slow and long pulls to disturb the surface of the water and attract predatory fish. In this case, it is necessary to ensure that the line does not sag. The method is especially effective in reservoirs with clean cold water, where slow wiring is most often used. The second type of wiring – medium in speed – is carried out jerkily with the extraction of short gurgling sounds: "bul-bul – pause – bul." In both cases, the bait is able to stir up the largest and not very aggressive predators.

The third option is when the wiring is done at the fastest pace using small poppers. Fast uniform posting of 5-centimeter lures in some situations is the most effective. In some ways, it resembles wiring such as "walk the dog on a leash" (when fishing on stick bates). The main condition is the small size of the popper, able to make jumps and jumps from side to side, simulating a potential victim wounded or exhausted. This caliber feed fish, and even “damaged”, the predator grabs more eagerly and eagerly. Fast popper fishing is especially effective when fishing in fairly clear water. Therefore, such baits, of course, should be at the disposal of the spinner.