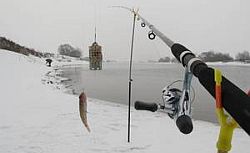 With feeder for bream in winter. Part 2

The next important component of successful fishing on the feeder is the choice of place. The bream prefers deep places, so you need to look for holes. But they catch, as a rule, not at the greatest depths, but nearby, preferably before entering the pit, upstream or from the side. Most often, the bream in the pit itself just rests, and feeds on the surrounding edges. A good sign is a sharp drop in depth, followed by a flat area, as well as the presence of zebra mussel near the fishing site. However, it creates inconvenience: the sharp edges of the shells easily cut fishing line. Therefore, it is advisable to cast near the zebra mussel colony so as not to lose feeders on the sawn-off shotguns.

It is easiest to investigate the proposed fishing location with the help of an eared sinker installed instead of a feeder. The depth can be judged by the time the load fell, and the nature of the bottom – by the sensations when dragging the cargo along the bottom. A good help in finding a place is the information received from spinning players, who at that time were also attracted to open water. Spinningists usually know where the bream is, since they jig on the backs with jig baits, they often turn purple and do not hide this information, since the bream is not interesting to them.

I’m unlikely to be mistaken if I say that half the success in fishing for bream is properly prepared bait. In winter, bait should not be too aromatic and should not contain a large number of high-calorie components. As a basis, you can take almost any ready-made mixture designed specifically for bream. If it seems that it is too aromatic, you can mix it in half with the base mixture of the same manufacturer. As an edible component – and it is necessary to hold the fish on the point – in the bream bait, you can add crumbly porridge. It’s easy to cook. To do this, take millet groats in half with corn and pour into boiling water, constantly stirring. Groats should be completely covered with water. Boil and stir until the cereal swells, having absorbed all the water. Then the swollen groats are cooled. The resulting porridge in the pond is mixed with a dry bait mixture. As a flavoring for bream fishing, you can use natural spices, such as cinnamon. Turmeric, ginger and vanilla are also effective.

When preparing bait, it is very important to properly moisturize it. Bait for fishing on the river should not fall out of the trough neither at the moment of impact on water, nor when it falls to the bottom. But bait should not be too viscous. The viscosity and the degree of ramming into the feeder should be such that when reeling up the tackle after four to five minutes of being at the bottom of the filled feeder, it is guaranteed to return empty. Humidify the bait mixture in small portions of water, allowing it to soak for 10-15 minutes after thorough mixing. After that, a test ball is molded, and if there is a feeling that the viscosity of the bait is insufficient, continue to moisturize. In winter, bait is more convenient to cook not in a pond, but at home, in the heat.

I’ll give you one of my own options for a bait mixture that has proven itself well on the Moscow River and consists of available components: Fish Bait-bream mixture -1 kg, Fish Bait-feeder mixture 1 kg, porridge 200 g, ground cinnamon 200 g. Ground biscuits, crackers and gingerbread cookies, passed through a meat grinder in an amount of 200-300 g, are good additives. In a bait, you can add a glass of maggot, preferably non-living, that is, first frozen, and after thawing scalded with boiling water. It’s good to take 300 grams of bloodworms (and if finances allow, then more) to add to the bait on the spot. The bloodworm must be either small, river, or large, the same as for the nozzle. The use of estuary, or, as it is also called, southern bloodworms is extremely undesirable.

When choosing a nozzle, we must remember that the bream feeds on the bottom inhabitants of the reservoir, primarily bloodworms, worms and larvae of various insects washed into the water, plant seeds that have fallen to the bottom. Large bream can also eat zebra mussel. The best attachment for bream fishing is a bunch of bloodworms. But it’s good to have maggot along with it, as well as star-shaped pasta, cooked for one to two minutes. If you managed to accidentally pull the zebra mussel ashore, you can try to plant its meat.

Choosing a place, it is necessary to cast the weights, as described above, to investigate the topography and nature of the bottom. When the fishing point is identified, the casting direction is fixed according to some reference point on the opposite bank, and the casting distance can be set by holding the fishing line in the clip on the reel spool. If the fishing line is clamped in a clip, casting must be done carefully, holding the rod vertically up. This avoids the breakage of the feeder if the casting is too strong. After the fishing point is found, we proceed to the arrangement of the place. First of all, you need to install the seat as close to the water as possible, so that it is convenient to look at the top of the feeder and be constantly ready for hooking. Position the bait bucket to fill the feeder without leaving the seat.

Install the front stand under the feeder: it should be under the second or third access rings, counting from the junction of the vertex with the rod. At the same time, the feeder itself should be located as perpendicular as possible to the casting direction: this position of the rod ensures maximum sensitivity of the tip. The weight of the feeder should be such that after falling to the bottom it will not be demolished by the current, and the feeder tip with abandoned gear should be bent at an angle of 20-30 degrees. Such, in my opinion, is the optimal bend at which bites are best seen.

We start fishing with feed. To do this, you will need to complete dozens of throws with a bait feeder, but without a leash with a hook. It is necessary to fill the feeder loosely, so that after falling to the bottom and idle hooking, the bait completely spills out. You can train in such a packing aground off the coast. The main trick of feeding is adding fresh bloodworms. It must be put directly into the trough: fill in a little bait, then put bloodworms, then bait again and crush. And throw such a "hamburger".

When stuffing the bait in the feeder and planting bloodworms, it is advisable to put the feeder with the tip in the water so that the rings do not freeze. Freezing must be monitored all the time! If you miss the moment, then casting will lead to the shooting of the feeder and you have to knit all the equipment again. It is better to remove ice from the frozen rings by rinsing the rods in the water, rather than digging out. Only with large rings can frost be removed manually.

Having fed a fishing point, you can tie a leash and start fishing. It is best to start by planting a bunch of bloodworms. After casting, we pause for 3-4 minutes, and if there is no bite, we exhaust the tackle. We stuff the feeder again, not forgetting to add fresh bloodworms, check the nozzle and reset. In the absence of bites, reboots at this pace must be performed within the first hour of fishing. But usually the fish makes itself felt much earlier. After the first hour of fishing, when the point is well fed, the time between reboots can be increased to 10-15 minutes.

Almost always, shortly after the start of fishing, biting of ruffs, small breeding and roaches begin. If the little thing pecks too often, you can try other nozzles: maggot, pasta, pasta with maggot, pasta with bloodworm, maggot with bloodworm. But after some time there comes a treasured pause: it means that the bream came and drove away the small things. This is followed by a powerful bream bite, then hooking, fighting – and the first winter feeder bream in the cage!

Bait for bream
Carp fishing on a side nod from a boat
When trolling is irreplaceable
Tags: bream, feeder, Part, winter