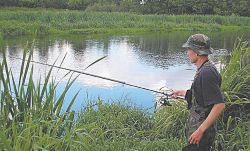 With bolone on the spring river

Bologna fishing is one of the best options for fishing in the spring, especially during the spawning ban, when you can only fish on a fishing rod with no more than two hooks, in places regulated by the new fishing rules. It’s difficult to catch a match, and such fishing requires more significant material costs. Sitting with a fly rod on a feeding place, contemplating a float, is not interesting for everyone. Bologna fishing is dynamic and provides the angler with more opportunities for creativity. Catching in open water with a bolognese can begin in March, on opened rivers, when there is no ban. Unlike a match intended for long casting in stagnant water, a lapdog is used when fishing for wiring on the river with the possibility of releasing equipment for long distances downstream. The fisherman chooses this or that length of the bolognese not in order to throw the float further, but in order to better control the equipment depending on the specific fishing conditions.

The optimal bolonez for a river of the scale of Klyazma near Moscow is 6-7 meters. The fishing rod is moderately long and at the same time light. The rod should be tough enough, since in spring there is a high probability of biting a bream or ide. It should not be bent into an arch when plucking a 300-gram roach. Shimano rated stiffness grade 5 according to Shimano will be optimal under these conditions. For the Bologna fishing method, a lightweight reel is used, which freely hands over and quickly reels up fishing line. Coils with a gear ratio of at least 1: 5 and a spool diameter of 2500 or 3000, with a shallow rim, meet similar requirements. You can use the spool with a regular side, but then necessarily with backing.

The diameter of the main fishing line is from 0.16 to 0.18 mm. When fishing, the wiring is undesirable for the fishing line to sink. Therefore, when buying a fishing line, make sure that there is no “sinking” marking on it. When fishing with bolognese, various floats are used depending on different types of current and types of wiring. It often happens that the floats, which are completely identical in appearance and in marking, still slightly differ in carrying capacity. Therefore, for each you need to prepare an individual load. I use Cralusso floats. Their main disadvantage is that they are very expensive. But these floats have a number of important advantages. Firstly, they are precisely calibrated for load capacity. Secondly, they do not “drink water” even after minor damage, scratches. But their main advantage is the possibility of transforming, changing the shape and carrying capacity of the float, depending on the fishing conditions, directly during fishing.

On the river I use a Cralusso Golf float with a lifting capacity of 4 grams. When fishing in a slow course without a wave, when the sub-stock floats above the bottom, I use this float in the “drop” modification with an antenna of medium thickness. In the same conditions, but with careful bites, I put a long and thin antenna. In conditions where there is no wave, and the flow is fast, dragging the float, I put the antenna thicker. In the wake of fishing when the subwoofer slides along a flat bottom, I modify the float into an “inverted drop”. Thus, four modifications can be made from one float. Four high-quality conventional floats for wiring in total are much more expensive than one Hungarian transformer.

For loading a float with a carrying capacity of 4 grams, taking into account swivels, the following arrangement of sinkers is required. Sinkers are located so that the equipment does not overlap and smoothly sank. Having felt the bottom, the stock, if it constantly clings, can be lifted to the upper sinkers. With a strong current, on the contrary, a 0.4 gram pellet can be moved to a sub-pass. Since bloodworms are mainly used in the nozzles in spring, hook No. 14 according to the international classification of durable but thin wire is used so as not to injure the larva.

Bait in spring for Bologna fishing is a must. The composition of any bait includes a number of permanent components: fillers, rippers, attracting components, flavors, feed base. Which components will be involved in the bait depends on the fishing conditions. The most common fillers are crackers, bran and clay. Rusks are a dense component of bait. If they are excessively soaked and kneaded, the lump will turn into “plasticine.” Bran is a loose component, they are light and do not absorb water when soaked. Clay is a heavy component of bait, its ballast.

On many rivers of the near Moscow region, such as Klyazma and Ucha, the current is mostly average, the depth in the places of fishing is up to two meters. The water in the spring is cold, the fish are inactive. Catching wiring occurs in the bottom layers. To feed the fish, you need balls that are not too dense, not very heavy, but strong enough so that they do not fall apart when they fall into the water in the surface layers or halfway – they need to gradually fall apart, being at the bottom. Based on this, the ratio of crackers, bran and clay in the mixture should be 3: 1: 1. If for one reason or another, the fisherman has to catch in fast sections of the river, the number of crackers and clay will have to be increased.

Rippers on average in strength can not be used. A mixture prepared in accordance with the above proportion will be loose enough to properly erode over the course. If the flow is very slow, then as a ripper you can add dry kvass, but in moderation. The attracting component is milk powder. Fragrances in cold water can not be used. Aft base – small bloodworm. In the spring, as a rule, animal nozzles work: a large bloodworm planted with a bunch of 3-4 larvae, or a sandwich of two bloodworms and two maggots.

On the river, fish can feed everywhere – and at depth, and aground, and on the stream, and on the return. It is difficult to calculate the optimal fishing spot on the move. However, starting to study this or that river, you should pay attention to the edge, back flow, shallow water with a slow flow and the presence of various kinds of tubercles, grooves – potential places where food may linger. When fishing for roach, the stock should be allowed above the bottom. When fishing for breeding and bream, the stock should be dragged along the bottom. But the most important thing is that no matter what fish you catch, the nozzle should move along the feeding track.

The Bologna fishing method is affordable for every angler. In order to master it, you need to master the technique of precise casting, to delve into the subtleties of loading the float depending on changing fishing conditions, learn how to cook and use bait on rivers of different depths with different types of flow. At the same time, the bolognese does not require too serious material costs from the fisherman.