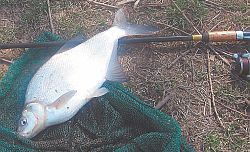 With a feeder behind a river bream

The bream can reach a decent size, even in the reservoirs near Moscow bream 35-40 cm long and weighing 1-2 kg is not uncommon. There are more solid specimens – up to 3 and more kilograms. In December last year, on the Moskva River in the Faustovo region, I was lucky enough to take 4 kg of bream on a feeder, and one of my friends caught a bream on the middle Oka last fall already “for a dime”! So there is still a large bream, and so far comes across. Well, scavengers weighing 200-600 g are quite commonplace. The hunt for a bream, especially for a large one, is associated with a number of difficulties, the overcoming of which in itself gives the covetous a real pleasure, especially if it ends with the capture of the desired trophy.

The bream inhabits almost all large and medium rivers, and enters the mouths of small ones. The river bream does not make long-distance migrations in search of food and usually feeds near the places of constant “residence permit”. Maintains mainly in quiet and deep holes, mainly with a muddy or pebbly bottom, but also goes to swings, sometimes to the fairway, without avoiding a rocky bottom. In June, 10-15 days after spawning, an intense zhor begins in the bream. By the middle of summer, it weakens and intensifies again by the beginning of autumn.

Where to look for him?

What places on the rivers can be expected to meet with bream? Firstly, it is a variety of pits, edges and dumps in depth. It is worth paying attention to underwater ridges and plateaus, to the so-called return lines, formed either by an uneven relief of the coast, or islands. Also, do not ignore sections of rivers where the zebra mussel colonies live, or silty places, where there are usually a lot of bloodworms. In general, there are a lot of places that the bream likes to visit, but various factors influence the frequency of its appearance at one point or another. It depends on the season, and on the weather, and on the time of day. For example, at night, when the water temperature drops, the bream, as a rule, goes to shallow sections of rivers with a muddy bottom to “eat” mosquito larvae.

In the daytime, in hot weather, this fish prefers to stay in deeper sections of rivers, where bloodworms may be smaller, but there are many colonies of zebra mussel. In general, it must be borne in mind that flocks of bream are constantly moving from one section of the river to another. For example, the bream, for some reason only known to him, may periodically leave the place where you caught it, and then return there again. Sometimes these movements clearly depend on the strength of the current, sometimes on the activity of the fish, but not least on the quantity and quality of the bait you use and its proper use.

How to feed him and what to catch?

The “correct” bait mixture and the nozzle play no less role in the feeder fishing of a bream than well-trained tackle. In order for the bait mixture to work well, you need to add more coarse-grained components and a certain amount of packed material to it. The bait mixture during fishing during the course should not only lure the bream pack from a great distance, but also keep it in the fishing zone, and preferably as long as possible. For this, not only finely dispersed, but also large particles of feed should be used. Small particles will quickly blur in the course and create a long trail that attracts fish to the fishing zone, and larger particles should keep it near the hook with the nozzle.

To add clay to the bait, I think is unnecessary. By this we only reduce the amount of bait in the feeder and also increase its total weight. Therefore, we will either have to use a more powerful tip, or take a feeder with less weight. In the first case, we lose in sensitivity, and in the second, the feeder, freed from bait, simply ceases to “keep the bottom”. Another thing, if when fishing at close range, feed with a slingshot. Here, of course, the addition of clay (soil) is desirable. If we talk about nozzles, then the choice here is quite large.

This animal nozzles – worms, bloodworms, maggot and sandwiches from them, various shells and even pieces of fat, and vegetable, such as the same "Hercules", barley, corn, peas, dough and, of course, pasta. Sandwiches such as pearl barley or a piece of pasta with maggot or worm, corn with pasta or maggot work well on bream. In general, when going to a pond, take along a lot of different nozzles – you can not always guess what will work. For example, this spring I caught on the Moscow River a bream for two kilograms per triple sandwich: a piece of pasta on the forend plus a small worm fixed by maggot. On that day, the fish pecked very poorly and simply ignored all other nozzle options.

This mixture is prepared like this. First, barley is cooked in sweetened water on a gentle fire. Then millet and some anise drops are added there. As soon as the millet begins to boil, the pan must be immediately removed from the heat. In this mixture of two undercooked cereals, you need to add branded bait, "Hercules" and finely ground sunflower cake, which gives the bait a smell and darker color, and also makes it more crumbly. As a result, the mixture should be quite heavy and slowly eroded over the course, containing both small and large fractions.

How to catch it?

For some reason, it is believed that feeders are more needed on the rivers more powerful and longer. In fact, on any river you can always find a place where you can successfully catch feeders and light classes. For example, in the evening, the bream often goes into shallow water with a weak current, and here it can be easily "reached" with a light and relatively short feeder. Particular attention should be paid to the choice of tops. Do not overload them when using feeders that are too heavy. In addition to the risk of being broken, an overloaded vertex is less sensitive to bite and makes it difficult to perform accurate long-range casting.

With the choice of coil, everything is simpler, but you must pay attention to good traction and smooth running of the coil so that it does not wedge under significant loads. It is highly desirable that it has an even stacking of fishing lines and an increased gear of at least 1: 5. But the location of the friction brake, as well as the presence of a beitraner, in my opinion, does not really matter. If we talk about fishing line, then everyone decides for himself – braid or monophile. Both have advantages and disadvantages. I prefer monofilament, especially since a very good monofilament fishing line is being produced specifically for feeder fishing. Usually it is dark in color, sinking, has minimal extensibility and is more elastic. Feeder line is sold in unwinds of 150 meters or more, which is very convenient. Such fishing line is produced by Shimano, Smart, Browning and other companies.

The diameter of the main fishing line, depending on the class of the rod, lies in the range from 0.14 to 0.24 mm, with a real breaking load of 2-6 kg. The use of thicker woods is impractical, however, as well as thinner ones. Leashes should be of different thicknesses and different lengths, for any situation: from 0.10 to 0.16 mm, length from 30 to 50 cm. Hooks No. 12-16, depending on the type of bait used. For feeder fishing on the river, square or triangular-shaped feeding troughs are very suitable in combination with a rigid anti-twist of medium length and a small, 3-4 mm diameter. It is best to use not straight, but curved anti-spinners. In my opinion, such an installation is both quite simple and at the same time the most effective.

If you have not been to this place for the first or long time on the river, then be sure to study the bottom topography with the help of a cheburashka and step wiring before fishing. “Everything flows, everything changes”, including the topography of the bottom, especially on the river. Let it take half an hour of precious time – it’s not worth regretting. This is better than sitting then without a single bite. When the fishing zone is defined, it is necessary to carry out preliminary feeding: a dozen castings of a feeding trough filled with bait to the point of future fishing. After that, you can proceed to the fishing itself. When fishing on the course, it is better not to reset the gear more than once every 10-15 minutes. Overly frequent casting and exhausting of tackle, especially if fishing occurs at relatively shallow depths, will not only attract, but, on the contrary, scare away a cautious bream.

If for some time there are no bites, then the worst thing that can be done in such a situation is to panic and try to change the casting zone or even change the place of fishing. Most likely, it will not be possible to study and feed a new point. It is better to be patient and continue to work out the selected area, not forgetting to experiment with different baits. This will bring results.