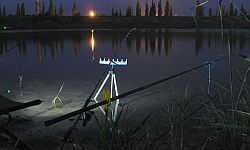 With a donkey on a hot night. Part 1

Night fishing at the end of winter and in early spring may be relevant in open areas of large, medium and small deep rivers, as well as in non-freezing waters. It is important to choose the right fishing point, equipment, bait and know the time of the fish for feeding. Significant role can play the right choice of equipment. Scientists are sounding the alarm that the ecology on the planet is changing. Today the winters are not as severe and extended as before. Therefore, many rivers in central Russia are washed away from ice in February. From February to April, when the flood has not come yet and the water remains clear, you can successfully catch the feeder or picker, and where there is a predator, you can use bottom seabed tackle. Large white fish often prefer to feed at night. Usually with the onset of dusk, it goes to shallower parts of the reservoir, where food is more.

Obviously, this is due to the greater caution of mothers. The bream, preferring to keep its depth in the daytime, is usually sent in search of food to suitable watering, a rocky ridge, or some other part of the land that is noticeable after dark. Similar exits at night make a large gustera, white-eyed. Similar diurnal migrations are also observed in some predatory fish, only their aspirations are aimed at searching for small fish, which does not rest on extreme and great depths, but more often on coastal shelves and shallow calm zones near fast water. So does pike perch, coming out at dusk from the pits to hunt for watering adjacent to the riverbed. Chub, ide occupy positions near the suvodi located below the bistrin. They wait, when on a current the side of the weakened fry will flash. Burbot also adheres to the trails that lead it from the channel deep water to the adjacent stony ridges with marks of 2.5-5 m. In any case, during the cold period of the year, these fish could be caught by bottom gear at night in such places on Upe, Oka and some other rivers.

When searching for food, most bottom fish at night react mainly to movements made by the bait, which are caught by the individual's sideline. The smell of fish in this case also plays a significant role, therefore baits with a natural strong smell and mobile ones should be used. These include the bark beetle, maggots, some species of worm, and for predatory fish (perch, burbot) – ruff and gudgeon. Night fishing with donks is often very effective, the main thing is to choose the right fishing point. The promising areas include:
– river confluence; – near the mouth areas of tributaries with a depth of 4 m;
– places in the channels with the banks overgrown with reeds;
– sites below bystrin with sharply varying depth;
– the lower underwater tips of the islands, to which you can throw a donkee;
– flooded flow of the tributary after flowing into a large river;
– sections below bridges and dams; – deep areas in the spillway area.

A fish is suitable for all such places at night, and here it can be successfully caught as a donkey with or without a feeder. So, on the Oka, after the ice has gone down, there is successful fishing for delicate feeder gear at the mouths of some small rivers, as well as near the Oka station, where a long depression is traced along the left bank. This is a continuation of the channel of the tributary – the river, which flows into the Oka River in the Serpukhov region. Here, at the end of winter and in early spring, some anglers successfully catch the ide, white bream, chub, and white-eyed dog. At dawn, you can "hook" and Podust, which in our time has become quite a rare fish. The live donkeys here are successfully pecked on burbot, perch, sometimes asp.

Mass outflow of fish to one or another part of the reservoir occurs regularly in some spring periods. Sometimes exit points can change as a result of changing weather and water conditions. This happens when:
– current changes on regulated rivers in connection with the closure or opening of dams;
– the water level on naturally flowing rivers rises due to floods and high water;
– fish eat food at the places familiar to it;
– the daily migration of fish is changing, associated with the approaching spawning;
– fish parking is changing due to harmful industrial spillways.

Feeder and picking gear. When using a feeder or picker-quivertip for night fishing, it is more convenient to use the tip-signaling devices with a luminescent color. In order to better distinguish done by degree of flexibility, they can be additionally painted in different colors. It is better to take a spool for a rod with a quality one with a reduced gear ratio of gears and a spool of increased diameter, which will allow you to confidently manipulate the gear when fishing in the current, especially if you need to transfer a section of too fast flow. When fishing with a feeder on a strong current, the advantages of a thin fishing line are obvious – the tackle becomes more sensitive. However, it should be remembered that the fish in the current is brisk and its sharp movements can break the tackle, so sometimes you have to put monofilament thicker, not to mention the leashes. In this case, a snap-in with a long depreciation plastic tube may help out. A plastic feeder-container for moldy worm or a very mobile bloodworm joins it through the carabiner.

In some cases, when fishing in non-freezing ponds, where fish is used to vegetable food in winter, you can take the feeder open. The plastic suspension tube is on the fishing line in a sliding position. In the lower part of the equipment, at the point of attachment of leads (one or two) to the main line, it is fixed with a swivel or a small light weight. The tubule is taken in length from 20 to 50 cm. It is convenient in that the outlying leashes during castings do not overwhelm the feeder. Practice has shown that when catching feeders on fast-flowing rivers of central Russia such strong fish as bream, chub, ide, it is possible to use coarse but very reliable equipment with leads of 0.23-0.25 mm. The thickness of the main line can be 0.2 mm greater than the cross section of the leads. Since it can still be very cold in the early spring night, it is better to lubricate the fishing rod with a special fishing grease to avoid abrasion of the line fishing line. If there are several rods and there is a chance to look through the bite, then it is better to attach small bells to the tops.