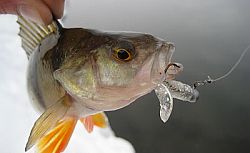 I was carried away with winter spinning only last year. Like most Muscovites, I catch in the lower reaches of the Moscow River, or rather, in the vicinity of Chulkovo. Oddly enough, but in the winter I did not meet any spinning player with light gear. Most catches with classic jig sticks with a test of grams up to 30-40. Such tackle is most suitable for catching zander, pike and asp, the result of which largely depends on the casting distance. But the nibble of these predators is inconsistent, while jig fishing for perch is much more successful: it is not in vain that they mainly rely on winter spinning competitions taking place here. You can, of course, use leash equipment, but, in my opinion, catching perch with light is more interesting.

By light tackle, I mean a rod with an upper dough of up to 15-16 g, a commensurate reel and a braided cord of 0.10-0.12 mm. The length of the rod is in the range of 200-270 mm. The rod is preferably of fast action with a sensitive tip, but at first any light class spinning will do. I myself catch a stick with a length of 230 cm with a dough of 4-16 g, and until recently, it suited me quite well, although its system is far from fast. Rings are desirable with an increased diameter: they freeze more slowly and it is more convenient to remove ice from them. The coil is required to operate reliably at low temperatures, and the stronger the frost, the higher should be the quality of the coil.

Cords in winter fishing are used by the so-called first generation, such as, for example, Power Pro and FireLine, which absorb compounds that prevent freezing – their use in frost is mandatory. It is believed that some formulations – WD40 and silicone sprays – spoil the wicker, and I agree with this, so I use liquid paraffin as the main means. I put it on the cord in the evening on the eve of fishing, and while fishing I process the cord and rings with a silicone spray: it is much more convenient in the field.

Those who fished in Chulkovo know well that there are quite a lot of pits right below the shore: they must look for perch in them. In these pits and mini-bays there is practically no current, which allows the use of light jig baits; other types of lures, in my opinion, are less effective. Personally, I “believe” in twisters on jig heads, which is why I mainly catch them. But I will not argue that this is the best option: success can be achieved with almost any jig bait, the main thing is to properly present it. And that means constantly experimenting with size, color, and wiring.

Posting is usually a step with a pause of 1-2 seconds, but you can lead the bait by dragging along the bottom or make short jerks with a fishing rod, reeling sagging fishing lines. The weight of the goods used by me ranges from 4 to 12 g, and I put 10-12-gram heads only during the flow or when long-distance casting is necessary, which is rare, but it happens. In other cases, I catch 4-5 gram heads. If the rod allows you to track the touch of the bottom with lures of smaller weights, then you can put them, especially where the depth is not more than 1.5-2 m. The more diverse the colors of the arsenal of lures, the better. Usually I start fishing with a green 4-cm twister on a 4-gram jig-head, since this combination is the one that caught the most perches. There are colored jig heads on sale, for example, there are Gigakatsu ones, and according to my observations, a yellow jig head in combination with a green twister is sometimes simply irreplaceable.

The tactics of fishing are simple: usually it is consistent by tapping the dots with a bait. For a long time it is better not to linger in one place: perch is not a zander, there is no sense in waiting for its release. It is easier to find an active flock in another place, and return to the silent one later. It often happens like this: you pull out a couple of perches from a point – and the bites become very careful, the fish does not catch, and then completely stops taking. Perhaps this is due to the fact that I immediately release the caught perches and their wary behavior is transmitted to the rest. I found only one way out: I give the point a break to return later.

This fishing is very interesting: if the bait and the wiring are selected correctly, then there are a lot of bites, as a rule, you don’t get bored. And the size of the Moskvoretsky perch is often quite decent.