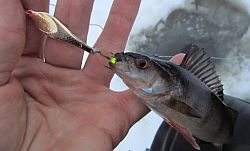 Winter fishing perch in the snag

Many anglers practicing fishing for striped predators in the deaf and not very deaf snag, in recent years, are increasingly using soft baits and rigs to avoid snagging and clipping gear. After all, our hero loves shelter. You will not see much under the ice, even with an echo sounder. But there is every reason to believe that in winter the behavior of perches is not much different from hunting in open water. Algae, flooded bushes, rocky ridges and, of course, snags attract a lot of fish trifles – fingerlings of roach, dace tree, bleak, gudgeon, smelt, which find here food in the form of invertebrates and crustaceans.

Following the fry, perch flocks enter the same snag, which are grouped by age and size by the first ice, otherwise the 500-gram humpback, like any cannibal, can easily deal with its small offspring. In addition, we should not forget that perch is an omnivorous fish, and in “strong” places for it there is always abundant, except for fry, another food: insect larvae, crustaceans, mollusks. Koryazhniki – very promising perch places, especially if they are located next to a fresh stream. On rivers and forest lakes, as a rule, these are trees that have fallen into the water from a washed shore, flooded bushes. On reservoirs and dams, the situation is somewhat different. Here, plots of land intended for flooding in the old days were not always carefully prepared. Stumps and dumped trees turned out to be under water, and the forest “at full height” simply flooded. It is such snags that anglers call deaf.

The instinct of self-preservation

Like any schooling flock, perch prefers to hunt in friendly company. An exception is large deep-seated individuals who try to appear in the coastal zone as rarely as possible and usually get their livelihood alone. There is no doubt that over the years, perches develop a protective reaction in relation to tackle, and especially in water bodies often visited by fishermen, as well as in “cloudy” places, which are considered to be snags. One of the main reasons for the “mistrust” of perch to the traditionally used artificial baits, in my opinion, is precisely the flocking lifestyle of this predator. And the point here is not so much the differences between the game of the same spinner and the movements of the small fish that your bait imitates, but the features and capabilities of the side line of the fish. This unique sensory organ allows the perch not only to find food, to hunt successfully, but also to “remember” (instinctively) the danger signals emanating every time from a panic rushing from side to side of its fellow with a hook in his mouth.

Active twister and other soft lures

If in an hour of fishing in a deaf snag you manage to cut off a dozen traditional spinners or expensive mormysheks, then you will inevitably think about how to avoid this in the future. One way out is the use of cheaper soft lures: twisters, vibro-tails or their substitutes. When fishing on a twister from ice, it is important to consider that, unlike vertical baubles and balancers, this is a more active bait (due to the vibration of the tail). Therefore, the sharper you will make a swing with a fishing rod and the heavier the jig head will be, the more actively the twister will work in the water column. But this is not always like a perch. If it is passive, try not to make too sharp movements with a fishing rod. The style of play is determined at the very beginning of fishing. Bites occur during the lifting of the bait, and in the process of its free fall.

Lift the bait, alternating light and strong jerks. If the fish does not take, use vertical wiring, all the way to the bottom edge of the ice. Often, the game turns out to be productive, when the bait occasionally dances at the very bottom, thereby causing an aggravation of the hunting instinct in the striped predator. This game is ensured by short nodding movements of the tip of the fishing rod with a sufficiently elastic and short, up to 10 cm, nod and moving the equipment around the perimeter of the hole.

A hook for a perch is needed No. 9-10 (hereinafter the sizes of hooks are given according to international classification) with a forearm of medium length, since most often the twister's body has to be reduced by 2/3. The shape, weight and color of the jig head should be in harmony with the twister. Especially pay attention to the fact that the "silicone" is as jelly-like as possible, and the bait's tail is mobile at the slightest movement in the water. At the beginning of fishing, I advise you to experiment with twisters in yellow, red, white, green, black, silver and pearl colors. It is advisable to use baits with neon sparkles. In clear weather and in shallow depths, the color of the twister is sometimes crucial.

A plunger in the shape of a lead plate, after swinging with a fishing rod, plans well, giving seductive movements to the light bait on the hook. On the side leash, small twisters can be used, their substitutes from rubber balloons, wool and even perch flies. Compared to a jig-head twister, the advantages are as follows.
1. A light bait on a hook has more degrees of freedom.
2. A sinker planning and carrying the bait along is not subject to hooks.
3. The perch after grasping does not feel heaviness in the mouth from the jig head, and it is difficult to miss the bite.
4. The possibility of using an offset hook, which allows you to quickly make a non-engaging (“scout”) from a “battle” bait and vice versa.
5. When hooked, the hook on the side leash is easy to release using a special hook.

To some extent, winter snap rigs from dual baits make it possible to activate the bite of even a passive well-fed perch, snoozing indifferently among stained and blackened driftwood over time. At one time, I began to master tandems with the simplest combination: a vertical spinner, above which there is a leash with a nickel-plated shiny hook, equipped with red "antennae" made of bright red cotton thread. Hook size – No. 10-15, with an extended forearm; the length of the "antennae" is 1-1.5 cm (approximately from the average caliber of bloodworms). The leash length is from 10 to 20 cm. Such equipment is especially effective when less oxygen remains under the ice and perch feeds rarely and exclusively on small bottom organisms. Spoon-bait in this case plays, mainly, an indirect role: delivery of light bait to the bottom and attraction of fish.

During the game, the "antennae" spinners wriggle in the bottom layers of the water, imitating the movements of the ruby ​​larva of the mosquito-dergunz. If the perches are under the hole, they will not take long. The bite is usually felt at the moment of raising the baubles. Sometimes a predator knocks on a bauble, but does not detect. If he is too anxious about the "antennae", there are no empty bites. The red color of the "antennae" (under the bloodworm) once again suggests that the striped gourmets perfectly distinguish between the color of the feed objects and the nature of their movements. Balancers, as well as vertical spinners, do not fit well with voluminous and heavy baits on the hook of the leash. However, they can become more effective, for example, in tandem with such a bait: 2-3 narrow strips of rubber of a bright red balloon fixed on a hook with a thin nylon thread. The choice of tandem rigs for fishing in the snag is determined primarily by the presence of “windows” free from obstacles. For horizontal spinners, such a “window” should be at least 2-3 m in diameter, otherwise dead hooks are guaranteed.

Above, I have already made it clear that fishing with traditional lures in “strong” places is fraught with frequent hooks. Unfortunately, in such cases, the release does not always help, for example, in the snag, where strong elastic branches remained on the trunks of flooded trees. In this situation, I recommend the use of unobtrusive lures. They allow you not to resort to a trailer and not scare away perch from a catchy point. But the main drawback of most of them is not always high-quality cutting. Therefore, where there are clean “windows” among the snag or you can catch using a trailer, preference should be given to combat baits with an open hook tip.

author: Kazantsev V.
We catch from the ice. All Secrets of Winter Fishing (Complete Fishing Guide)