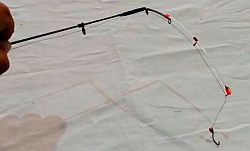 Winter fishing for bait with a side nod and mormyshkoy

This gear is quite versatile. It allows you to adapt to different fishing conditions. Areas of open water are located closer or farther from the coast – a folding telescope of appropriate length makes them easy to fish. The ability to correctly identify fishing grounds and mastery of the tackle guarantees the angler a catch. Particular attention is paid to the nozzles. Tackle can be very effective in warm winters, when even on the rivers of the middle belt large areas can be free of ice. In the winter cold water, especially when the sun is shining brightly, the fish seeks shelter under deep coastal edges, flooded shrubs, trees and other shady places.

I remember a case when my friend and I came for the weekend to my aunt's village house on the Upa River, and she, a big lover of fresh river fish, began to complain that because of bad ice, her neighbor did not go fishing and did not supply her with plotters for a long time yes perch. “Okunki is not a question,” I said to my aunt, “I think I can catch them from the shore,” and, taking the summer fishing pole with a side nod and mormyshka, went down to the river. Going to the bystrin, I discovered the open water on the border of the suvod. Green algae swayed here, and I placed a mormyshka near them. Slowly playing a bait near the bottom immediately brought a perch, then another. The flocks of minke whales actively attacked the bait not only near the algae islands, but sometimes right under the very shore if it was steep and there was a depth of at least a meter below it. Good places were those where on a narrow, literally half a meter wide width, a green sedge grew right under the coast – on the rivers with the passage it sometimes retains its freshness for a long time. There were caught two of the largest perch.

Then I walked along a coastal shrub whose branches had grown into the ice, but behind it were tracts of open water. Here, under the visors of ice, we managed to catch several ruffs and a couple of plotvits. In short, although the fish was not a trophy, it was quite enough on the ear, and the aunt was pleased. A long telescopic fishing pole, equipped with a suitable side nod with appropriate rings for skipping the fishing line and a fly fishing reel, allows the angler on the shore to efficiently fish various shelters with a jig. I consider this tackle all-season and sometimes I catch it even in winter in some ponds if there are open water near the dam.

However, deaf equipment with fishing line on a small foam reel makes tackle easier. True, with a dull rig it is not always possible to bring to the shore and take in a large catch. The reel is installed on the 3-4th knee from the tip of the rod. When attaching fish, the lower knees almost always have to be folded, because the fishing line is usually much shorter than the length of the rod. Depending on the characteristics of the reservoir on which it is supposed to be caught, they take a rod from 6 to 9 m in length to equip the rod. To make it as light as possible, it is better to buy a rod made of the lightest carbon composite material. A length of 6–7 m is considered more convenient for fishing, but it is sometimes impossible to reach distant brovok on major rivers and canals.

The choice of side nods today manufacturers offer a variety. There are good nods made from a metal or polymer plate. In my fishing arsenal, there is a good nod of three overlapping plates. The nod is quite long, and the plates, due to a properly constructed structure, reinforce it to the base, and because of this, it flexes evenly when playing. The simplest nod can be made of plastic bottle by cutting out a strip 20-30 cm long. The base of the strip should be wide and the end narrow. At the narrow end of the strip, you can attach and fix with a glue a brightly colored foam ball with a spacious wire ring. An additional ring for the skip line is mounted at the base of the nod. At the tip of the rod, the nod is fixed through a thick-walled rubber tube.

Nods are selected under the mormyshku certain mass and a certain power over, so when fishing you need to have a supply of nods of different length and width. For this item of equipment, I have a special pencil case that is compact and convenient for operational manipulations. Mormyshka need to be selected in accordance with those food organisms that are characteristic of this reservoir. It can be “Uralka”, “Dreisen”, “pellet”, “Ant”, “Fender”, “Oatsinka”, “Droplet” and others. If the current blows a light mormyshka, and a larger fish reacts poorly, then you can put a tandem mormyshki or use a snap with a large mormyshka and a hook on a leash tied above the mormyshka.

A large bloodworm, maggots, larva of burdock moths or “sandwiches” are suitable as a nozzle for cold winter water: bloodworms + maggot, bloodworms + larva of burdock moths. If in the winter it is possible to wash up some water larvae or mormysh, then such a nozzle on the rivers of central Russia can be more catchy. This is due to the fact that on rivers with a natural flow and a hard bottom, the bloodworm is an unusual nozzle. In the protracted thaws and closer to the spring a small red worm can be a good fishing tip. It sometimes attracts white bream and bream, who like to stand in the quiet coastal depths. Since the game mormyshkoy conducted in clear transparent water, the fishing line is chosen the thinnest. Usually for winter fishing with a side nod, I put a fishing line with a diameter of 0.10-0.12 mm. If there are bites of a large white bream, then it is necessary to increase the diameter of the fishing line to 0.15 mm.

The most important moment of catching – the game mormyshkoy. You can offer a variety of winter game tricks that work well for both perch and all white fish. For example, a measured leisurely play with a mormyshka near the very bottom can be very attractive for roach, perch, podleschika, busters. Sometimes during the game the bait needs to be put on the bottom for a few seconds, and then restart the game again. Another variant of the game, when the mormysh is placed on the bottom, fidgets with it on the ground, imitating a larva burrowing in the silt or crustacean, and then very slowly without hesitation, lift the mormysk up to a height of 1 m. 1.5 m from the bottom down. Oscillations are slow or fast with a wide or narrow amplitude. On the steps the wiring is suspended, but the vibrations do not subside and do not change at all. Another way: very delicately playing up the mormyshka, move it close to the ground to the left or right.
There are also other ways of playing, more suitable for catching a certain type of fish. The fisherman should himself feel what game the fish responds better to.

In areas of winter open water with a fishing rod with a side nod and jig, such fish as bream, roach, bleak, ruff, bluebird, dace, gudgeon, white-eyed bird, guster, chub, ide, bersh, perch and some others are well caught. To catch a certain fish you need to take into account the peculiarities of its winter place selection. Properly made equipment of fishing rods we consider may well be suitable for fishing in fry. For fishing on fry, they use both usual mormyshki with hooks of increased sizes, and special flattened mormyshki with two hooks. On a regular mormyshka, the fry is baited, piercing the sky with it, on the double-hook fry, it is laid horizontally and pierced in two places. With the mormyshka intended for baiting the fry, it is good to catch in the heat sinks, where fast spillways sometimes spin a lot. Here the perch, sometimes the chub, the ide, bites the tackle well.

The fry are caught both by the method of vertical wiring (playing at the bottom, raising and lowering the bait with a smooth amplitude of oscillations), and by the method of horizontal wiring at the bottom. In the second variant, it is good to let the mormyshka at the bottom, holding the line in the tail, at a fast or medium-speed jet near the rapid stream. And I would also like to say a few words about fishing in winter ponds and dams. The fact that I am not alone in choosing this tackle for the winter period, was convinced, often visiting the ponds of the Tsaritsyn cascade. Here, near the dams (more often in the upper part, and sometimes in the lower part), we managed to see anglers with a summer fishing rod, equipped with a side nod and mormyshka. Experimental fans have not always had the result, but one day I saw how a fisherman raised a very weighty perch from the dam depth.

Having some practice of fishing in the near-dam area of ​​the ponds, I concluded that the fish here, especially in the cold autumn-winter-spring period, react poorly to the bloodworms, but prefer their usual food in the form of various larvae and other organisms that live under stones. They can be found by turning over stones in shallow water, where water is well enriched with oxygen. When fishing in the winter for a summer fishing rod from the shore, you must be extremely careful and do not come close to the shore, because the thick snow canopies cannot always withstand the weight of the angler and fall down into the water. You also need to avoid escapes to the coastal solders of ice. You need to control your excitement so that the fishing will not be spoiled.