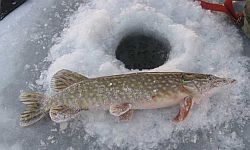 Where to look for pike in winter

In contrast to the “summer” methods of fishing for pike from ice are not diverse. Mostly it’s sheer gait and fishing for lapdogs. But there are plenty of nuances. You need to know them in order not only to make walks on the ice, but also to return home with worthy trophies. In addition, the lack of experience leads to a very sad result – an injury to the pike, leaving after a bite with a ragged leash.

Usually, a pike guards its prey in an ambush – at stones, snags, or bottom irregularities. Lurking, she can stand still for a long time until a victim appears nearby. Pike ambushes, as a rule, must be sought near the accumulation of little things. Having found a deep brow or snag, you should drill holes so that they are located in accordance with pike paths and ambushes. A broad search for pike sites is best done with a small thickness of ice (up to 30-40 cm). The best time for flashings is the first and last ice, when pikes begin to group in the lower reaches of rivers flowing into reservoirs or vast lakes. A pike pecks at any time of the day, sometimes more actively during the day, sometimes in the morning, and sometimes in the evening. It often comes across zerglitsa at night. In the dead of winter, it is inactive; she perks up during long thaws. Even on the first ice with an increase in frost, the nibble weakens. But it is worth starting the thaw, as predators are instantly activated.

I had to catch pike in different periods of the ice season. And every time I became convinced that with the growth of the ice shell the predator seemed to be replaced. Either it does not show signs of life at all, or it is grouped in areas where the oxygen regime remains relatively favorable. The exception is clean forest lakes with spring water, sandy, sandy-cartilaginous or rocky bottom. In the Novgorod region, for example, I know of several such lakes where there are no lockouts in any cold.

If in closed reservoirs dying vegetation in the winter period leads to a sharp reduction in the oxygen content, then underwater thickets in rivers are more a virtue than a disadvantage. In addition to shallow bays with silty bottoms and elders, lining up from the river with an increase in ice thickness. In such places, you can catch a pike a maximum of a week or two after freezing. Then its activity decreases sharply. And if there is an opportunity to move to more comfortable and fodder areas, pikes together leave the "dead" zones.

Another thing is the coastal strip of the river with a weak current, overgrown with algae. There are many shelters, an abundance of various food for non-predatory fish, which, in turn, attracts predators. However, it should be borne in mind that offshore, at a depth of 1-2 m, small pikes are most often grouped, up to a kilogram by weight. Larger individuals rarely come here, mainly in the morning. Their main location is indented dumps in deep pits, underwater spits at the confluence of tributaries, snags at the outlet of the bays, overland over capes and other places that contrast with the general character of the coastal zone. On a medium or large river, it is enough to find two or three such places in order to successfully catch pikes here throughout the winter. After catching several pikes, places suitable for ambushes are occupied by other predators of approximately the same size.

Closer to the burning of ice, the situation is changing. Pike leaves winter camps earlier than other predators, heading to places of future spawning grounds. At this time, it can be more often seen near the outskirts of the spawning bays, at the confluence of the tributaries. Of course, the larger the body of water, the greater the chance of a good catch. Any artificial pond has its own characteristics. The living conditions of fish in it largely depend on the regulation of the water level, the difference of which in certain periods, especially before the spring flood, can reach two to three or more meters.

The behavior of pike living in regulated water bodies is overwhelmingly stereotypical. This predator shows the greatest activity after freezing, as a rule, on the first and last ice. The exception is the reservoirs included in the water supply system of large cities. There are pumping stations along the banks, regularly taking water. In such reservoirs, the oxygen regime remains favorable throughout the winter season.

If you are often in the same pond, it is advisable to mark catchy places even in open water. In vast reservoirs, it is good to study the topography of the bottom during water discharges. Usually the greatest decrease in level is closer to the spring flood, when it is necessary to reduce the load on the dam. Future fishing spots during this period are easy to determine. Usually I choose landmarks on the shore and from them I search and count. I enter all the data on the edges, ledges, pits, snags on home-made cards. Therefore, as a rule, I don’t have to do test holes for the next year: I immediately go out to the right patch, sometimes limited to just a few tens of square meters.

Using this search method, I found, for example, a rather interesting place along the flooded ravine on the Nerl, near the confluence of the Volga. Once at the bottom of this ravine there flowed a small stream three hundred meters long. After the formation of the Uglich Reservoir, the banks of the ravine are two dumps in depth. Pikes were taken here at a depth of 2.5 to 7 m, and after the capture of several individuals, others soon took their place. I noted a characteristic feature: large specimens of yellow river pike came across near the old channel of the Nerl, and as one approached the shore and the gully narrowed, it was mainly average pike, or even “greenish” squint, which simply had to be released. Pike can catch their prey along the borders of reed beds, in the windows among vegetation. It is a good idea to use an echo sounder to search for curved edges and other suitable places.

Cord or monophile? Ice fishing
Winter fishing for bait with a side nod and mormyshkoy
The first burbot of the first ice
Tags: pike, where, winter