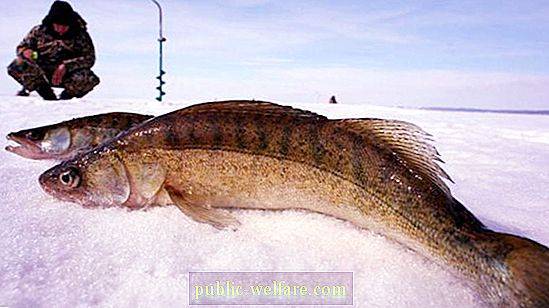 We caught a pike perch on the Lower Volga

Steep waves smoothly tossed the boat, the cold wind strove to make its way into every crack in the clothes. Everything else periodically began to rain. When you don’t follow the tip of the spinning rod, you always try to find a strip of the coast – it is visible, but in the distance, at the very horizon. The full impression was created that the flood had already begun and the entire vast space between the Volga and Akhtuba had turned into a continuous sea, on which waves were walking. But the spill was still ahead, in early May. We just fished almost in the middle of the Volga, trying to catch the spring course of the pike perch, for the sake of which we drove one and a half thousand kilometers. Most anglers associate the Lower Volga with the sun and hot sand. It is believed that 1500 km south of Moscow it cannot be otherwise, and even in April there, as in Egypt, you can walk in shorts.

This also happens, but not always. In general, the spring weather in the Lower reaches is difficult to predict. When we arrived, the sun was shining with might and main, and somewhere in the calm it was possible to sunbathe. But as soon as we went out into the open, the cold piercing northeast wind forced them to pull on almost winter equipment. True, on the third day the wind changed to the south, but it didn’t get any warmer: it blew out the sailor and brought rains. Moreover, since the wind was blowing against the current, the wave rose serious – on the main channel of the Volga up to one and a half meters. When we went up – against the current, but downwind – it was still bearable, but returning, jumping from wave to wave, was not very comfortable.

However, all these inconveniences are nothing compared to the fact that we still managed to catch an active pike perch. Finally, our dream came true: we saw with our own eyes that biting “like a machine gun” really happens. While getting ready for the trip, we figured out where and what we would catch. After discussing different options, we agreed that it is worth doing mainly pike perch. We stopped in the village of Shambai – just opposite the famous Mitinka merges with the Volga. This is not the first time we have been to these places, so we had an idea where the zander packs can keep. On the primary Volga, first of all, it was necessary to look for holes. The depths in them are from 15-17 to 20 meters with exits to 8-9 or 6-7 meters. The pike perch tends to change in depths, and it was useless to look for it on flat areas. The pits on the Volga are very different both in depth and in size; there are also very large ones, several hundred meters long, but more often, having anchored in the center of the pit, you can fish all the slopes.

At first, the boat was placed according to the classical scheme – in the deepest place, and thrown into shallow water (according to the Volga scale) and pulled the bait into the depths. The pike perch took, but there was no talk of crazy nibble. At some point, we realized that this option for the location of the boat in our case is not the best. Once during a snack, the wind and the current pulled us off the anchor and pulled us to one of the pit slopes. The boat was almost aground, but due to the wind and turbulence, we did not immediately notice it. Realizing that under us is not 20, but only 8 meters, they wanted to return immediately, but then decided to check the point. It turned out that when conducting from the depth to the aground the fish took much more often, and most importantly, the specimens came across larger. This sometimes happens at some points in the summer, but this time we checked this pattern at all other points, and everywhere there were much more bites with wiring from the bottom up. If in the classical scheme there were on average five or six bites per ten casts, then from the bottom up – eight, or even nine.

However, even with a huge amount of pike perch, one cannot say that he took for everything and for any method of feeding the bait. To find the right bait, we had to check the entire arsenal. We started with rubber and foam rubber, but the rubber worked clearly worse. Foam rubber was in the lead for a couple of days. Then, after another break in the weather, the pike perch began to prefer polyurethane foam. However, at different points the priorities changed, and it was immediately difficult to understand what the zander would like at a particular point. Therefore, we have always tried to fish with different lures in order to quickly find the most catchy one.

Of the colors, yellow and red worked best, both on rubber and on foams. By the way, it was the skins that brought the largest fish, and in the last two days, pike perch everywhere, as an agreement, took only them. He took it on any model, the only condition was that the tee had a colored edge. Perhaps the fact is that, having a very large positive buoyancy, they played better in the course of the foam and the pause during the posting could be increased to five seconds. At the same time, there were a lot of bites on the clamp: the pike perch pressed the bait to the bottom and was spotted by the tie. Just as important as the bait was the way it was fed. From the very beginning we tried to catch by throwing upstream, but this method, often the most effective in other conditions, brought only one or two bites per dozen casts. The best results were given by casting downstream, but in this case it was necessary to use sinkers of 50-60 grams – with smaller ones, at great depths and strong currents, the bait did not reach the bottom.

The demolition wiring yielded optimal results. The cast was made slightly upward diagonally so that the bait would go exactly along the stump. In this case, a sinker weighing 38-42 grams was quite enough, although the depth was often 12-17 meters. At this depth of fishing, especially with an active bite, there is a problem with small fish. With the rapid rise of a small perch from 15 meters, he receives a barotrauma incompatible with life. It is difficult to deal with this, but it is possible. First, after hooking, there is no need to rush to play, you must try to determine the size of the caught fish. If it is small, then it was taken out as slowly as possible. If, in this case, the fish was damaged in one way or another, they lowered it into a large cage hanging by the side. He served as a kind of resuscitator. We released all the fish that came to their senses, the ones that fell asleep were taken to the base to the delight of our neighbors. However, with our careful handling, there were few sleeping fish.

Despite the fact that it was already the end of April, the pike perch, it seems, was not going to get up on the nests – apparently, the water was too cold. However, this only concerned the Volga – the water in the lakes had already warmed up much more. We realized this when we went there for the pike. In one of the ilmen, on ordinary turntables, they caught one for 5 kg and two in the region of 3 kg. All the pike just oozed with caviar and was about to start spawning. Of course, we immediately released all the caught fish. The pike perch, as often happens in April, changed its campsite all the time. In the early days, he kept to the same points and, apparently, was just beginning his movements. On the first day there was a lot of him, on the second less, on the third he disappeared in two of our favorite pits, but at the same time he appeared in completely different places. The whole pike perch was schooling: if bites began, then all at once, and they lasted for several hours.

Flocks of pike perch of various sizes apparently walked side by side, but almost did not mix. So, on one of the pits, when casting to the minimum depth, to a drop-off from 5 to 7 meters, the pike perch came across small, on the “bed” from 7 to 9 meters weighed 1.01.2 kg, and at the drop-off from 8 to 12 m pecked the largest. We returned to Moscow happy, but also a little sad. We got on the move, took the pike perch like from a machine gun – the “idiot’s dream” came true, but the dream come true is always a little sorry.