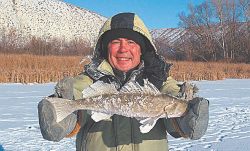 This winter in our area began somehow wrong. On the one hand, we were lucky that a little bit of snow fell, there was no heavy rain before the frosts and ice quickly got on the reservoirs, and on the other, the fish did not catch like they usually do at the beginning of winter. And this forced to look for new places over and over again, to try to catch different baits in different ways and different fish. A few years ago, at about the same time, we went to the Don in the area of ​​the farm Vertyachiy and loved these places for their versatility and the diverse species composition of fish. Remembering how we used to catch a ban in shallow water with a weakened current, how we caught pike on a hoax at the entrance to the backwater, and also being fully confident that there was a pike perch, we decided to check this place again.

We began to drill at a depth of 1.5-2 meters. Usually at this depth, up to 4-5 meters, live banan and bream. The current in this place changed direction towards the opposite shore, leaving in front of the sandy shallows a gentle slope with a weak burden, on which it is quite comfortable to catch on an ordinary mormyshka with a thin fishing line. Despite my passion for fishing without a bottle, I began to search for an old proven lead mormysk with bloodworms. It is somehow calmer. The fact is that there is a perception that the current has a negative effect on the attractiveness of the devil. I really wanted to check this assumption, but for this I had to first find the fish. To my surprise and joy, I found a ban. I caught several pieces from one hole, and one very solid one. Pecked banned very carefully, 60 centimeters from the bottom with a slow rise with a fine shaking. There were bites on the standing mormyshku from the bottom, but the largest caught high. I called the others, and we took up a more detailed study of this point.

It was obvious that the ban is spinning here, and I started to catch the devil. But in the five holes that I prepared, I did not see the bites. Doubts overcame all the stronger. After all, on a mormyshka with a bloodworm pecked, and rather large came across! Vaughn and Arkady poured on the lured hole, and I have not a single touch. Is it true that the current negates all my efforts? Maybe the food objects resembling fish devil, do not live in the current? But here again on the rise, approximately at eye level, the devil confidently detained, and I hooked something very worthy! I even twitched behind a dimple, which lay in a drawer, but when I saw a fish in a hole, I quickly dig into its face with my fingers and dragged it out into the snow.

Further attempts to catch the devil did not bring any results. The impression was that it was necessary to look for the fish again, but I was not ready to look for it with a devil. I believed in mormyshka more, and it was harder, as it seemed to me. In general, I lost my temper and again began to catch on the mormyshka with bloodworms. Until the end of the day I was able to catch only one decent banana and a couple of hands, not counting three perches. The fed up holes were silent, and in the evening we did not see any revival of the bite. But I was quite sure that there was a fish under us. The careful touch of the bait was still felt. On this day, other fishermen from our company were looking for a perch on the dump in the direction of the backwater. They fished two sudachas on balancers, and there were still bites and gatherings. This proved that the place remained universal and that it was necessary to come here again.

Disappointing news from friends from different reservoirs of the region made us come back to the same place a day later. Morning frost under minus 21 and the absence of wind – isn’t that good weather for pike perch ?! And the pressure during the day should not change much. However, I began with the holes, under which the day before yesterday was spinning banned. I tried it in the old lured ones, then I moved to the right, to the left, deep down – there are no poklevok. And the frost is serious! Scaffold freezes moment, the hole freezes. In addition, my old Leningrad ice-breaker began to ask for retirement. I changed two sets of knives for him – he doesn’t want to drill, that's all. The tricks with the closing of the cutting edge of the knives did not help either. I put the old ones back, which were somehow drilled, but to look for a fish with a borer that refuses to bite into the ice is a bad thing. In order to warm up a little, I walked around the old holes with a scoop and decided to check them one last time before going to the comrades to catch the pike perch.

And in the old lure hole there was a bite! My soul sang! It turns out, banned all the same under me? So, I just could not find the necessary wiring, guess what he needed today! And the fish is a good one! The line rings, as if some weight swaying smoothly under the ice, is about to break the line. Fingers without mittens quickly get cold in the cold, but I hardly notice it. Baiting a fishing line with a strong draw. To make maximum use of the stretch of the monofilament line, he stood up from the box and dug out the fish with his arms extended. Here she darted a couple of times under the hole, I looked a couple of times at the box in which the bagore was lying, but from the icy gruel the pike perch appeared! He bent in the hole and froze as if in perplexity that he was dragged onto the 0.125 line. I easily picked it up with my finger under the open gill and safely dragged out of the hole. Such a surprise! On the one hand, joyfully, on the other – it is a pity that this is not banned. Still need to go to the comrades to catch perch. It can be seen today is such a day.

Experiments with a jig head

I usually catch a pike perch in the winter with a fish jig. But this year I decided to test how he is caught on an ordinary jig-head with a vibro-tail. On one of the fishing trips on the first ice, it seemed to me that a jig-head with a vibro-tail cuts small bites of gobble. At that time, those who fished caught 10-15 pieces of trifles, and for the whole day I had only two bites and one unfolded hook. I regarded this as the beginning of the experiment, which I will continue in the future. And this moment has come.

I had a simple tackle: monofilny fishing line 0.4 (thick fishing line is not so confused on the ice and does not cut the fingers when playing) and the 25-gram jig head with the Power Worm BTS 3-3 / 4 "color 010 phosphorescent vibrating tail. On the course, the lure was blown away from the landing site for another two meters, or even three meters. Perhaps this played a role. My comrades by this time had caught only four perches on the balance bar, and had not seen a single bite on the fry. Now we had two icebreakers for three, I made five holes with the prospect of finding a change in the relief and about He plied one hole for a long time, setting the line for the sake of the stream. The first pike perch pecked on the riverbed. He took the whole jig head completely into the mouth. For the winter it was a good size: 1200 g.

To drill was not lazy. They were looking for an elevation, which they discovered in the fall, catching a jig from a boat. That seems to be found: a strip of hummocks and a change in depth and current. I thought that the hummocks are just a manifestation of the uneven bottom relief. And indeed, I again snatched the pike perch, which revealed its presence with a clear bite. And again we all rammed around, but neither for fry, nor for balance, nor for vibro-tail there are no bites. The impression was that the matter was not the bait, but that I was lucky, and I more often than the others got pike perches under my breath. Single pike perch on the mainstream – this is normal.

We wandered off in search of the school perch. Someone went under the opposite shore, someone at the entrance to the hole, and I continued to explore the hummocks, which went diagonally to the shore. After a dozen holes again stumbled upon Sudak. When lowering the bait with swaying, it was as if someone had clicked a jig head, and I automatically swept over. Sudachok! Let not large, in the region of a pound, but sudachok. Next in the same hole, I again bite, and I already drag out a pike perch for 1300. What is it? Pack perch or evening out? I called Dmitry – and he had a fry meeting in the neighboring holes, and he pulled out one pike perch. When comrades with balancers came up to us, we still saw a couple of bites, but we didn’t catch anything.

Now we think and wonder, why did it happen that I have five Sudak in the standings, and the others have either zero or one? After all, the pike-perch took quite correctly, with a clear bite. Phosphorescent properties of rubber? It is unlikely, because they tried to catch on the same luminous balancers. If the pike perch attracted the smell of edible rubber, then why didn't it react to the smell of a live fry? Anyway, I’ll have to come back there – and I, perhaps, will go buy a new drill and a pack of cherished rubber.

Summer vagaries of Ikshinsky pike perch
Winter spinning fishing for zander
What can a wobbler do? Part 1
Tags: days, vertyachy