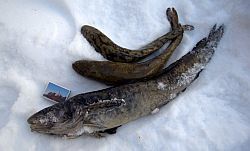 Time to catch a burbot. Part 1

Burbot is a great original. In the middle of winter, during the most severe frosts, when the ice thickness reaches almost a meter and when most fish lead an inactive lifestyle, this nocturnal predator will breed. To successfully catch burbot from the ice in a particular reservoir, you must first know the places of its spawning grounds. Having noted eggs (in the middle zone of Russia it is usually the second half of January), he begins to eat intensely. And for some time it is not far from the spawning ground. Most often these are sites with a rocky or sandy bottom. A fresh stream is required. One of the main living conditions for burbot is the relative purity of the reservoir. Unfortunately, there are fewer such places. Therefore, it is not surprising that burbot is becoming an increasingly rare fish, especially in the European part of our country. And, of course, how the trophy is of considerable interest.

In search of burbot trails

I had to catch burbot in winter on lakes of glacial origin (Karelia, Novgorod region), in the Volga and Moscow Region reservoirs. So there is some experience. On Karelian lakes, for example, this predator can most often be found on underwater rocky "navels" (the so-called ludas). And if you find yourself in a congestion of a predator, it is preferable to catch it on spinners: such fishing is more athletic and exciting than catching on zerglovy and other stationary gear. Muscovites, beginning winter-fishing anglers, I recommend trying their luck on Lake Volgo and other lakes of Valdai, as well as on the Rybinsk and Uglich reservoirs.

Where to look for burbot here? If according to the first ice of the bite it can be at a depth of 1-1.5 m, then with an increase in the thickness of the ice it moves to a greater depth – up to 2.5-3 m, and sometimes even deeper. Usually these are places with a noticeable course or areas where underwater springs hit from the bottom. It is always useful to explore the coastal zone, especially where there are large stones or thick roots of trees standing on the shore. Also interesting are the places in which snag is adjacent to the river dump in depth. My many years of experience in fishing for burbot testifies to the fact that such a purely fishing expression as “burbot parking” is a very conventional concept by definition. Burbot, like any other predator, does not stand still in anticipation of “manna from heaven,” but moves in search of food. Of course, the bottom shelters for its survival are simply necessary, especially in the summer, when, hiding in burrows or under stones, he is going through difficult times.

In flowing lakes in the central part of our country, for example, he takes a fancy to places under steep steep banks, especially where there are trees whose roots extend under the water. It is also attracted by underwater mounds, ditches, snags (next to a fresh stream). In northern lakes of glacial origin, burbot can most often be found on underwater elevations covered with flagstone or rocky ridges among the depths. In the rivers, he adheres to deep reaches with a sandy-pebbly bottom, leaving at night from shelters to hunt on the shallows in the coastal zone for fish trifles. In reservoirs, burbot should be sought on underwater brows, near deep holes, near bottom irregularities, and also at the places where brooks and streams exit.

Knowledge of the bottom topography is the first condition for the successful detection of burbot. The search for bottom shelters is best done with an echo sounder during daylight hours. On the other hand, the habitat of the burbot in a particular body of water is the same from year to year. And burbot fishermen know them well. The exception, perhaps, is the regulated reservoirs in which the water level before the spring flood can drop by several meters. In such situations, burbots are forced to make local migrations, shifting to areas where they feel more comfortable and where there is plenty of food. Adult burbots appear to be more likely to move. This is evidenced even by the fact that the bites of large burbots are often in the most places that are not characteristic of this predator.

Searching for burbot sites and “trails” along which he travels in search of food is not easy during the winter season. But over time, you can adapt. It should be borne in mind that spawning burbot for some time remain near spawning grounds: at the exit of rivers and streams, along stony ridges, especially where there are underwater springs. If you find several such places, success is guaranteed. From year to year it will be possible to hunt for a night predator here.

It is very important to determine the time of fishing. Late autumn zhor of burbot during the freezing period is interrupted for some time only in low-flowing water bodies and where there is no current. On fast-flowing rivers the situation is different. Here, when the stalls are formed, and “fat” (in Siberian – sludge) goes along the channel, a lot of fish fines are clogged under the ice off the coast, here they come from the depths of the burbot for the elderly. Moreover, under the cover of darkness, sleepy fish become their easy prey. When catching a predator at night, it should be borne in mind that a water temperature of 3 to 7 ° C is most comfortable for its life. At 12 ° C it can already become numb. In bodies of water with a weak course, the burbot, in all likelihood, painfully carries the first days after freezing. In central Russia, this predator takes well all of December.

In January, he begins to spawn. First, the largest individuals spawn. There is another unique feature of burbot – during spawning, it continues to feed. I had to catch burbot on the Uglich, Ivankovo ​​and other Volga reservoirs between the Christmas and Epiphany holidays. After wedding games, adult burbots come to their senses for some time without reacting to food. But already at the end of February, and sometimes even earlier, the nibble gradually begins to intensify again. And in March there are outbreaks of zhora. Of course, where this fish is still preserved.

I will not dwell on the daily diet of burbot, since there are a lot of factors affecting certain hours of its activity. So, for example, it is believed that he goes hunting only on a dark hopeless night, but I caught him well on a bait and in the light of the moon, at a depth of 6-7 m. I also noticed that it is better to catch burbot in the thaw in the second half the night, and in clear frosty weather it’s better to take in the evening and morning twilight. Much depends on the period of the ice season: ice, deaf winter, the last ice. All these factors, of course, must be taken into account when catching a night tramp.

How to choose a wobbler. Part 2
The first burbot of the first ice
Where to look for pike in winter
Tags: burbot, catch, Part, TIME