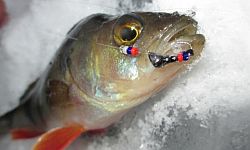 The tricks of the little bait. Part 2

If natural baits are not used in fishing, mormyshka attracts fish only with its appearance and movements, therefore the size, shape and color of the bait are of paramount importance. The number of mormysheks intended for direct fishing is huge, and we will consider only the most common. First of all, it is worth noting the various "bananas" that mimic the amphipod. As a rule, these baits are used without additional beads. Most often they are painted either in dark colors – black, brown, or, conversely, in bright yellow-green or golden. Mormyshki work well on roach and perch, but not always. Significantly increase the catchability helps the tendrils moving when moving. It is simple to make them: a pair of pieces of red and black threads is attached to the forend with a simple knot, then the threads are cut, leaving the ends of 5 mm.

When fishing with these mormyshki, as, incidentally, with all other rewinds, it is very important to choose the length and elasticity of the gatehouse, as well as the game itself. It is possible to increase or decrease the amplitude of movements, change the frequency, perform the rise both uniformly and by steps. An extensive group of non-persistent mormysheks are various “nymphs”. They do not have a hole in their body for tying fishing line: the hook passes through the entire body, so that on one side it comes out prying, and on the other a loop. The peculiarity of the “nymphs” is that they work best only in a specific position. It can be fixed with a small cambric worn on the hook ring. In order to correctly attach the nymph mormyshka, you need to remove the cambric and put it on the fishing line and only after that tie a knot in the eyelet, and then slide the cambric on it.

Another feature of the “nymphs” is the presence of colored plastic discs on the hook of the hook that prevent the locking cambric worn after them from coming off. Often the angler does not notice that the Cambrian, having moved, presses the disks to the body of the mormyshka. This usually happens after the capture of the first fish: when hooking, the hook bites into the soft tissues, and they move the cambric up the hook. Sandwiched with cambric discs lose their freedom of movement along the sub-shore and stop playing, and the fish do not peck. To avoid this, before lowering the mormyshka, check the position of the cambric and, if necessary, move it to the hook. Roach, perch, and even the scavenger are good at pecking at the “nymph”. Do not try to increase the effectiveness of the bait by hooking a bloodworm on a hook. After this, bites usually stop altogether, as the disks stop moving.

Various ants are very popular with anglers. Their color is usually dark, often black or green, imitating a real ant. However, the color of the "ant" can be slightly changed, which very often increases the catchability of the bait. Mormyshka is covered with nail polish, but only transparent with sparkles is suitable. For some reason such mormyshki are very popular with large roach. In contrast to the “nymph”, a bead of yellow or orange color is usually put on the hook of the “ant”. The body of the bait has a hole; fishing line is first passed into it, and the note is tied to the forearm of the hook. Before tying it is necessary to move the bead. Here, as in the case of the “nymph”, the attractive effect of the bait is achieved due to the free movement of the bead along the hook, therefore it is also necessary to constantly monitor the position of the locking cambric.

In general, the theme of the game is very extensive, and any angler will always find something to tell about his own tricks, so I will focus only on one point. With the same rod, with the same equipment and bait, you can achieve a completely different game: just change the angle of the rod. It can be held horizontally, but can be almost vertically down. With the horizontal position of the rod, the flexible elasticity of the nod smooths all movements – the game is smoother. The closer the position of the fishing rod to the vertical, the less the nodding reaction – the movement of the bait becomes sharper and sharper. Often it is the quick and fractional movement of the bait that increases the number of bites, and sometimes only such a game can only attract fish. Especially part of this posting technique works when fishing for roach.

It happens and vice versa. For example, when catching a perch, it is advisable to hold the playing mormyshka at one point, minimizing the rise and lowering, that is, to give a high frequency of movement, but with a minimum amplitude. To achieve this, it is necessary to limit the amplitude of the movements of the pole, placing it between the extended and slightly spread fingers of the other hand. In this case, with a quick game, the nod does not have time to bend and unbend at each movement of the six and starts to vibrate. The vibration of the nod along the line is transmitted to the mormyshka. This technique helped me more than once when a passive bass gathered under the hole, but refused to take the bait].