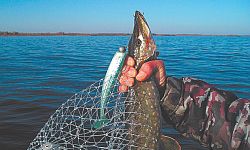 Testing theories on the Rybinsk Sea

Prolonged bad weather with strong winds for about a month did not allow to go fishing. But, finally, forecasts promise a window of cool autumn sun and calm.
– Have you seen the weather? – a friend calls.
– Meter per second and the sun.
– Go?
– Go!

Together with the first rays of the sun, my partner and I are on the shore. The very low water level immediately catches the eye. Where they swam in the summer and were “headlong” is now dry land. Well, it’s good: it’s easier to find fish. We pumped up the boat, collected the spinning rods, and then it turned out that the navigator with promising points remained at home. Well, okay, there weren’t that many of them! We will fish on the Volzhsky reach, where it is not yet so wide and you can find the old point along the coastal and water landmarks, and then, with the help of the echo sounder, get into place more accurately. So the sun appeared over the trees. Heat. We arrive at the first point. Dredger work place. The depth differences in the form of a cardiogram from two meters to six end in a sharp drop of 13 meters. We get up at six. Casting inward, upward, along – is empty. The echo sounder is silent, there is no fish.

We decide to spin somewhere nearby. In one hundred and fifty meters we find the same dug heap. Fan casts, clear striker, sweeping – silence … I draw out a bright green ripper 4.5 inches long – no cuts, a trace of a fang on the lead. Shit. The shelling of the bite sector with various silicone and metal baits does not bring results. Let’s go further. I remember that yesterday out of my ears I heard a conversation between two fishermen: near the black buoy on the bend of the old riverbed, they were catching bream well. Where the flock is, there are shepherds! We decide to move in that direction. Let’s go, admire the golden autumn, the sun is warming, there is no wind – beauty! The gaze falls on the depth readings. What is it?! Stop! An even section of the bottom with a very gradual decrease from five meters to six, suddenly sharply – 9, 14, 10, 6, 5.5 and again a plain. We return, we find this pit. It seems not very wide – about thirty meters. The device does not show fish.

We stand at the top of one dump, counting on throwing up the opposite one and tapping both dumps and depth. For this situation, a load of 25-30 g will be just right. If we were fishing on the channel edge when the boat was installed at a depth of 14-15 meters, I would safely put 35 grams. On the bottom of the dump, when the bait is 10-15 meters from the boat, even a 30-gram load hangs on pause for a very long time, up to ten seconds. I’m not that patient, although very often on such long hoverings, a zander bite follows. True, usually the size of these “long-paired” fish is no more than 250-300 g – larger ones are caught on rapid falls, one or two seconds. Here, when the bait is brought to the boat, the wiring “from the depth to the aground” begins and the 35-gram sinker will simply drag along the stall. Although such a wiring can also bring results. The current could make serious adjustments, but today is a day off, the Uglich hydroelectric power station is not working at full capacity, so this factor can be neglected.

The first casting is silence. Suddenly a sounder squeak is heard. Fish … At the bottom … More squeak … More … Lots of fish. Where from? It just wasn’t there. Apparently, the boat was turned around by the wind and was slightly demolished – 10 meters below us. That’s where all the linen is! They found the “herd”, it remains to find the “shepherds”. Another cast – an empty bite at the very depth. After exhausting the bait, I notice deep cuts on the abdomen. Pike. We came for her! We start tapping the depth. Empty. One fish for such a school of white? Something is not right here. In order not to interfere with my partner, I begin a series of six-meter casts. There is a very clear poke on the third wire. “Some kind of snag,” the partner states sadly. There are no snags, but there must be fish, of that I’m sure. Another heel of casts – no bites, you need to shift.

Having examined the relief a little, we determine that this is not a pit at all, but a ditch. One hundred meters to the side – the situation with the depth is the same: a drop from six meters to fourteen and an ascent to six. We get up at six, we are again blown away by ten. Again the echo sounder beeps, so persistently that it even starts to get nervous. I try to find the edge of the upper edge with fan casts. On the third wire I feel a pinch – a cut … Here it is, the long-awaited elastic weight on the other end of the line! The landing net is ready – and the one and a half-kilogram beauty is in my hands. I took it on the ripper in a bright light green color. My partner asks for the same, but I don’t have any more. I take it off the leash and give it to him, and I decide to experiment. I open the bait box and my gaze falls on the 6-inch ripper. Despite the malicious exclamations that there are few crocodiles here, I put it on without hesitation. A large piece and the mouth rejoices! Moreover, the tires are new, all bites will be documented by fresh scars.

Cast to a depth, the bait climbs up the edge, with the next cast I felt the upper edge. Seeking out a coastal landmark for the next casts with my eyes, I feel a clear blow. Hooking – and a minute later the second “poltorashka” is in the net. This means that the pike is on the upper edge. Here it is necessary to catch! We begin to fish six meters. The partner has a bite, but a too soft spinning rod does not cut through the mouth with a pike, and the fish comes off after a couple of meters. We change sides: I throw in the direction where my partner threw, he – in mine. On the very first posting, bite, sweep, landing net … Again one and a half kilograms. Pike school for a walk! All the same size. Ten minutes without bites, we are going to look for a new place. We drove another hundred meters. The situation is the same: a fall from six to fourteen, a fish squeaks at ten. The first postings on the upper edge – a bite from the partner. This time he was not taken aback, quickly brought the fish out, and already in the landing net it spat out the bait. Again too soft a spinning rod did not cut the fish.

After changing the boards in the place where the partner’s four-inch ripper was just briskly jumping, I again catch pike on the first wire. It turns out interestingly: provoking fish with small baits – and at the sight of a large one, its nerves cannot stand it and it bites. It seems like Lesha Galkin has already talked about this in these places. Regularity? It looks like yes. Later that day, thirty meters from the upper edge, we found a small in width, but extended snag, in which there was a bream. This was perfectly visible from the readings of the echo sounder and mucus on a leash and braid. Moreover, the bream was inactive, standing between the snags. The pike, apparently, was guarding the herd of bream along the perimeter of the snag, expecting someone to move and become an easy prey. But the easy prey for her that day was not a bream with a bream, but a 6-inch silicone.

– There is grass nearby, there my friends caught it well yesterday, let’s go check it out? – says the partner. Why not take a trip? The grass near the depths is a very promising place. Need to check. Enough jig fish, let’s go catch twitch fish. The island of underwater vegetation turned out to be very rare, about ten meters in diameter. Well, once we have arrived, we must catch. One cast, the second is empty. The tenth is silence. I look around in search of a new place – Father! Boiler! Not perch. Splashes, jumping fish … Let’s go! Well her, this herb. We approach the boiler at low speed. By inertia, we swim up to a distance of fifteen meters before the bursts. They do not stop, which means they have not scared anyone away. On the spinning rod, I have an Ecogear minnow of 105 mm with a depth of thirty centimeters – I wanted to catch a pike. I will dip everything in the boiler on a drum, and I will cut out a frank trifle with a big bait. Casting, another – bite and descent, bite – descent. Japanese hooks cannot hold fish badly! Casting – a bite, it seems to fit well, only the size is too small …

Near the boat itself, the “perch” flashed a silvery side and swam away. Five seconds of bewilderment. The first thought is asp. And where is the famous asp kick when biting? The size is probably not the same. At this time, the partner had a bite – this is where his light spinning rod came in handy – and a fish in the boat … A minute of numbness … and in one voice: “Roach !!!” Another cast – the partner still has a roach. All bites in the mouth. The 10cm minnow is probably too big. I put 65 mm of the same company, only about a meter deep. The wobbler often clings to the bottom, the game is high-frequency, there are no bites. I change it to the famous L-Minnow 44 – no bite. Popper also failed. Meanwhile, the partner pulled out more fish. I look at his wobbler: a white edge hangs behind. I find a broken turntable, remove the tee with a red edge from it, put it instead of the rear tee on a thin Chinese acid-green wobbler 70 mm long. Cast, another, bite – descent by the boat. Cast again, bite – here it is, my first spinning roach!

Soon the activity of the roach decreased, and the fish began to get puckered up. Well, this is no longer fishing! What prompted the usually peaceful fish to rush to wobblers? I think it’s a matter of food competition. The roach was spotted only behind the rear tee with a fringe, and bites followed more often during the pause. Apparently, the wobbler attracted the attention of the fish, and during the pause, the target of the attack became clearly visible – the fly on the tail, which the fish tried to take away from its fellow flocks. This is how we once again became convinced of the correctness of several theories: the theory of the herd and shepherds, the theory of the big piece and the theory of provocation put forward by Galkin. In addition, we had the opportunity to lay the foundations for a new theory – the theory of twitching roach. There is little to do: prove it in practice. Eh, it would be the weather!