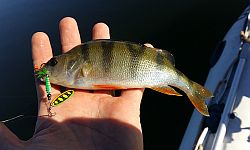 Spinning lures were and remain the main type of bait for a huge number of spinners. They are especially popular with beginners, since catching fish with a “spinner” is, generally speaking, easier for a beginner than with a wobbler or jig. Accordingly, most of the questions about spinning lures come from those who have recently picked up a spinning rod.

When is petal size most critical?

Some time ago the Mepps company, in order not to break the already familiar size range of Aglia Long lures, introduced an additional size 1+ between the first and second numbers of these “spinners”, which we call “one and a half”. It is clear that this was not a publicity stunt, of which there are many practiced in this area, but a motivated necessity. Those few millimeters that separate the length of the petals of the “penny” and “kopeck” turned out to be too large an interval. Of course, such a small difference in size does not always matter. First of all, the size of the petal is critical when fishing for perch in the waters frequently visited by spinning anglers. Many times it happened to observe a picture when there are a lot of bites on a “turntable” of small size, but frankly small perch is caught. You put the spoon on the number larger – the bites almost stop. But if there is something in between, then with wolves and sheep, everything suddenly turns out to be in perfect order – that is, there are a lot of bites, and the size of the perch is more interesting …

Does the weight head scare the fish away?

I myself had at one time a prejudice against “turntables” of this type – with a weight-head. It seems like the weight on the spinner’s axis is “hidden” in the cone of the rotating petal, while the weight-head looms in front of the petal, not covered by anything … Perhaps there is some truth here that can be supported by practical statistics, but now I am sure that mostly our negative attitude towards such spoons is subjective. It is very significant that my “turntables” with a head suddenly started working, after that my friend, with the help of one of them, “made” me on pike-perch fishing in a ratio of three to one. I believed in spinners of this type and began to fish with them at least no worse than with more usual ones – with a load on the axis of rotation. I would like to emphasize that we are not talking about jigspinners now, in which the weight of the head can be very large, and the technique of guidance is completely different. Spoons, similar in design and size-weight proportions to Mepps Lusox, presuppose, first of all, uniform or close to it wiring and work perfectly for pike and perch at shallow and medium depths.

Is it true that in muddy water there are more bites on the so-called “acoustic” spoons?

A variety of “turntables” are called “acoustic”. These are Sonet from Abu Garcia, Super Vibrax from Blue Fox, and many variations on similar themes. In some cases, it is argued that the holes in the petal emit, when it rotates, some special waves that additionally attract fish, in others – the axial weight in the form of a bell, tinkling, makes the spoon more “audible”. Therefore, in conditions of poor visibility, “acoustic” spoons are preferable … A little higher I have already noted that many advertising tricks are used in the design of spinning lures, and now we are talking, of which I am absolutely sure, just about one of them. Everything is very simple: if spoon A has all the advantages of spoon B, plus one more, which can be conveyed to the mass fisherman in simple understandable words, then spoon A is sold twenty percent better. Even if this “decisive” advantage turns out to be a dummy.

In the case of spinning spoons, almost all the power of hydroacoustic vibrations, to which, in fact, the predatory fish reacts, is due to the very fact of the petal rotation. Of course, the spectrum of these vibrations depends on the geometry of the petal and partly on the geometry of other elements of the spoon. But even the smallest change in the buckling of the petal entails much more noticeable changes in the spectrum than cutting small holes in it or something else from this series. If at least in your student years, even the smallest, were engaged in laboratory hydrodynamics, this should be obvious to you. Well, the most effective method to increase the “hitting radius” of a spoon in insufficiently transparent water is to use a larger spoon. For example, the same Super Vibrax with a transition from number two to number three in turbid water very often provides an increase in the number of bites – sometimes one and a half to two times or more. It should not only be forgotten that not every fish reacts positively to an increase in petal size as such …

Should I go through the “turntables”?

Fishermen-pedants often completely dismantle the purchased spoons, and then collect them again. What for? There are several reasons for this. First, the build quality itself is often not satisfied. And this applies not only to “terry-Chinese” products, but also to the lures of the most “standard” companies in their field. I came across, for example, Mepps “turntables” (“relatives”!), In which the twisting of the wire reinforcement clearly interfered with the free rotation of the petal. Secondly, sometimes it is useful to alter the spinner a little, adapting it to the tasks that you set for yourself. So, on the “turntable” Warrens Double Loon initially has a large tee. If you intend to catch a predator with a relatively small mouth (ide, grayling), then it makes sense to change it to a smaller one. Or here’s another option for remounting the spoon, taking into account the fishing conditions. For fishing in rivers with upstream guidance, it is worth changing the axle weight to a heavier one. Finally, among advanced spinners, it is customary to sort out spinning spoons in order to put additional Teflon spacers between the blades, which are designed to make the rotation of the petal as easy and free as possible.

Which companies’ lures spin the line the least?

The line twisting problem, in my opinion, is somewhat exaggerated. Therefore, in order to reduce it, I do not put any additional washers on the axis of the “turntables”. As for specific firms, the expensive “turntables” (Double Loon, Myran) twist the line less in the first approximation than the cheaper ones. Spoons with an eccentric weight (both axial, and even more so – in the form of a head) – even less. An indirect indicator of the low significance of the twisting issue can be considered the fact that the heads of the well-known Italian Heron lures (which with a heron on the petal) have heads made emphatically symmetrical. Note also that the relevance of the twisting problem decreases sharply when switching from monofilament to soft braided line.