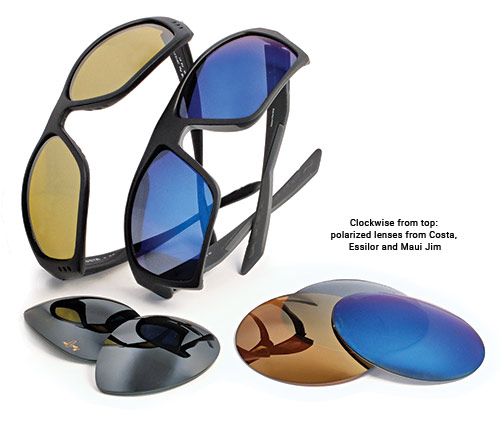 How obligatory are side screens for polarizing glasses?

The question is rather controversial, but my opinion is rather not in favor of the side screens. More precisely – I not only consider them optional, but also to some extent harmful. The purpose of the screens is to cut off the side light that interferes with direct vision. However, as is easy to see, it is not the side beams that strike the eyes from the side or fall on the rear surface of the filters that create significantly greater problems, but those that strike the front surface at an acute angle. In addition, glasses with side screens are much more likely to fog up, especially when you have to move a lot. The most acceptable compromise is glasses with removable side screens. These are often found, and removable screens are either made of leather (Aqua) or plastic (Mouche de Charette). Catch stationary – let there be a lot of screens, but move intermittently – it is better to remove them.

Can polarizing glasses be used for something other than their intended purpose – for example, for driving a car?

There are probably no fundamental restrictions here, except for the same side screens – they narrow peripheral vision, and this is critical behind the wheel. And glasses with color filters (especially yellow shades) can distort the color of light signals, so it’s better to be careful with them. Again, safety considerations make it preferable for the driver to use plastic filters over glass ones. In all other respects, polarized glasses practically do not differ in their area of ​​application from ordinary sunglasses.

I have myopia. I tried special pads with polarizing filters and was not very satisfied. Is there an alternative?

According to reviews from several people, the best option is contact lenses in combination with ordinary polarizing glasses. Although pads for diopter glasses – this is actually used more often, it is worse, since in this case you have to put up with two additional surfaces that do not contribute to a better perception of the “picture”. And the dust settles on them more, and the parasitic light makes itself felt more strongly. As not very popular yet, but a promising option, it is worth mentioning diopter glasses with glasses that have a polarizing effect. A year and a half ago, such a “two-in-one” system was available only by special order for a lot of money, since they had to order abroad. Now – I heard this from at least two people – everything can be really performed in Moscow, and it costs relatively moderate money, and in terms of execution time it is a maximum of ten days, which is also important. Alas, I cannot give the exact coordinates of the optical workshop, because the question is not relevant for me, and I somehow did not think to extract all the information, and for many it would probably be very useful … Try to search using standard methods on the Internet – such things are simply obliged to be promptly reflected in the “web”.

In the store there are polarizing glasses for almost one and a half hundred dollars, and in a stall nearby – for two hundred and fifty rubles. Where does such a huge difference come from?

One hundred and fifty is far from the limit. Even three hundred dollars is not the highest price for polarized glasses either. And an intractable price fork is common across a wide variety of consumer product groups. If we talk about what is closer to us, that is, after all, spinning reels for twenty dollars and eight hundred. As a first approximation, both are intended for the same thing. More expensive glasses are not only more durable filters and “options” in the form of the ability to change the geometry of the temples and removable side screens. They also have, as a rule, those parts that are in direct contact with the skin are made of soft and hypoallergenic plastic. Often, expensive glasses are equipped with two covers: the outer one protects them from impacts and squeezing, the inner one protects them from dust, and at the same time can be used as a cloth for cleaning filters. Well, and some more little things … Decide for yourself – how much a set of all these “little things” matters to you.

Glasses in glasses come in different shades. Which one is optimal?

In short, one of the two is either neutral gray or yellow-brown. Gray is versatile. Yellow-brown – convenient for spinning and fly fishermen, as it allows more contrast to distinguish fish in the water. In addition, filters with a yellow tint are more justified in cloudy weather and in general in relatively low light conditions – as, for example, now, in the middle of winter. If you can afford to have more than one pair of polarizing glasses, then in addition to the same yellow-brown glasses it is a good idea to get glasses with mirrored filters – when viewed from the outside, as a rule, they still have a bluish tint. This option is considered the best in conditions of excessive light, especially in summer, when you have to fish on a sunny day in a large body of water. Filters of “exotic” colors (pink, deep green) are often intended primarily not for the spinning player and not even for the angler in general. But if it suddenly turns out that you have no other choice, there should be no special objections to their use.

I have already lost my glasses twice while fishing, although both times it seems that the fixing cord was with them. What to do?

Incidentally, I also lost two pairs of polarizing glasses. True, this is not so much in ten years, but one has to reckon with such losses – this is a fact. Especially fraught with losses running coastal fishing in difficult conditions for movement, when we are forced to wade through thickets of bushes. When the glasses are in the “working” position, it is hardly possible to lose them. Another thing is when baseball caps are raised above the visor. In order to avoid an unpleasant surprise, you should definitely use a safety cord. And here, it should be noted, there are subtleties.
First, you must make sure that the lace is securely fastened to the temples. Sometimes the lace is simply threaded through the hole and a knot is tied at its end, in other cases there are loops at the ends of the lace that run freely along the arches, and the expansion at the ends of the arches does not allow them to slide off. So, in both cases, there is a possibility that the lace will come off – either the knot will be untied, or the loop will stretch. And this should be monitored regularly.
Secondly, even if everything is in order with the fixation of the safety cord on the temples, it may be useless when the glasses are in the upper position. They will just fly back, and you will not immediately notice it. To prevent this from happening, I pass the lace under the baseball cap size adjuster. If this regulator is in the form of “Velcro” or the most common – “perforated”, this is done very simply. If it is not one of the easily detachable ones, then I fix the string of glasses on it according to the loop-to-loop principle.