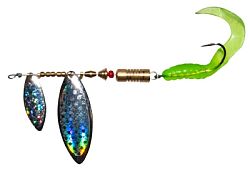 Tandem of lures in a spinning rod. Part 2

In the summer, this ubiquitous predator most often has to be caught in overgrown shallow waters or shallow eyebrows. Aquatic plants are interesting for pike for two main reasons:
– due to photosynthesis there is a more favorable oxygen regimen;
– underwater thickets. They are rich in various animals (crustaceans, leeches, insect larvae, mollusks, etc.). Flocks of small fish are attracted, which, in turn, serves as food for pike. Merging with the background of algae, predators feel especially comfortable in such places, delivering lightning-fast reflex strikes from ambushes.

At considerable depths, places convenient for pike ambushes are usually smaller. Here, predators have to get food, as they say, “by the sweat of the face”, hunting mainly for theft. But the pike, as we know, is a poor styer. Despite the agility and explosive “character”, with an unsuccessful throw, she usually immediately stops the pursuit, even if she is very hungry. And he is looking for another victim, more "compliant." Here the principle of the tandem is triggered, more precisely – the hunting instinct “toothy” to intercept the victim, which is already almost overtaken by another “predator”, or even bite the last one.

If predators are not disturbed, they can take certain places among the thickets throughout the day or even several days, waiting for prey, and then quietly digest food. Keep in mind that a hungry pike and a well-fed one are not the same thing. And in the second case, tandem equipment by the way, and not only because of the instinct of interception, but also because the predator jealously guards its territory from the appearance of an unsolicited rival. One way or another, but practice shows that the pike is always not averse to punishing one of the participants in the chase. The effectiveness of some tandems in pike fishing can also be explained by the fact that they imitate the movements of a flock of small fish. For an attacking predator, this is always preferable to chasing a single victim.

Pike tandems for fishing in overgrown shallow waters are primarily compact. If when fishing with a track where long casts are not required, you can use tandem rigs in which the baits are located on relatively long leashes, this is unacceptable in spinning fishing for purely technical reasons. In this case, double baits most often make up as a whole (say, two different-sized rotators on one rigid rod or a soft steel cable with a load head). There are reservoirs where pikes, having exterminated fodder fish, switch to frogs. And, therefore, for toothy predators, an artificial frog can be irresistible. In some stores, for example, you can purchase a “frog” tandem: a plastic frog + a noise impeller.

Here I would like to note that the different nature of the game of baits working in pairs is more a virtue than a disadvantage. I will give you an example. Somehow on the Pakhra River, I came to a site that clearly suggests the presence of pikes. As I tied my favorite Blue Fox swinging bait, a spinner came up to me.
– In the morning there have already been about five people. I myself spent an hour and a half at this place and at least one bite, ”he said.
Apart from myself being too “stubborn,” I carefully listened to my colleague’s advice to go this way and that way, where, they say, the pike were “sea”, but I decided to try it on the site I liked, which was literally far and wide before casting. Having caught one backwater, I moved to another, where almost to the middle of the river the sandy bottom with long trains of algae was clearly visible.

This time, above the oscillator, I put on a very short leash a silver Panter from Myran. On the third cast, when the tandem passed just above the mane of algae, a pike was swept out of them and, turning abruptly, “sat down” on the tee of the teeter. This naturally inspired me. And the rest of the time I caught only on tandems, made up of dissimilar decoys. The result is five pretty decent pikes caught in a river that had never before pleased me with such catches.

Regarding this predator, there is an opinion that he is lazy. This is partly due to the fact that its bite during stepped wiring is most often poorly expressed. Yes, and with normal wiring in the first seconds, it is sometimes difficult to determine that the hook is a fish or a bunch of grass. And only when the pike perch is shifted to the side, do you understand who you are dealing with. Pike perch, as a bottom and deep-sea fish, would seem to be the least suitable for fishing on dual baits. However, it is well known that this predator hunts not only in depth. In the early morning hours and evening twilight, not to mention night time, zander go to the coastal shallows, where they arrange real raids when hunting fodder fish. In some reservoirs, you can even make a “schedule” of predator exits strictly by the hour during the day. Hunting zander is a rather frisky and aggressive predator with a developed sense of rivalry. And, of course, well-chosen tandems of lures in this case can give an unexpected effect.

I could give many examples in favor of zander tandems, the formation options for which can be very different: oscillating baubles + turntable; vibrotail + twister; two rotators, etc. In previous years, for example, when fishing for pike perch, I quite often used a tackle with a dead fish. Then somehow he switched to “foam” and jig baits by itself. Thus, he saved himself from the need to stock up with gudgeons, roasts or brushes every time, and was quite pleased. But this did not always suit zander.

Once, when I arrived at the fishing base in Ostashovo (Ruzskoe reservoir), I learned from fishermen-circle-mongers that zander takes mainly on live bait, but the nibble is very weak. After 1.5 hours of morning fishing, he “tortured” a single gallop weighing about a kilogram on the foam, decided to experiment with tandems, which he changed every 10-15 casts. The line came to the snap with a minnie, only in front of the bait I put a homemade spinning spoon with a yellow petal. It was this tandem that brought me then three good zander. The practical result is always more eloquent than any theoretical research. When choosing tandem rigs for pike perch, in my opinion, it is preferable to use two-color baubles (brushed silver, yellow brass) and yellow, orange or red twisters with neon sparkles.

As a matter of fact, from the “striped” I began to really get involved in tandems. The case helped. Before me was a rather deep bay, above the surface of which the tattered shreds of morning fog had not yet scattered. If you have fallen into a good perch “battle”, you can imagine my condition. Literally throughout the water area of ​​the gulf, here and there silver sticks were thrown out with silver spray. Water in these places boiled with breakers, and champing sounds indicated that attacking perches swallow their victims. Finding such an Eldorado for a spinning player is already a success; you cannot lose a single minute. And I was in a hurry, feverishly changing the rotators and twisters, and from time to time cutting off the excessively outraged predators.

The “fight” near my shore lasted about ten minutes, after which the perch flock shifted in pursuit of bleak to the opposite side, where light baubles and twigs on jig heads did not reach. It was necessary to go around the bay to the other side or to change something in a snap to provide long casts. And so, having tied the small "Storling" (the first thing that came to hand), and 25 cm above the spinner on a short leash, a red twister, from the very first cast I get to the fattening perches. The bite follows the bite, all perches cling only to the twister. But here I admit a dead hook, and my long-range Storling becomes a victim of driftwood. And this is even good, because the rotator with the load-head, which replaced it in tandem, brings me a few more 200-300-gram perches. That fishing, as you know, I was pleased.

The above example is not so common in the practice of any spinning player. Perch, especially large ones, often have to be caught blindly and, moreover, in places with a far from perfect bottom. Therefore, your set of tandems should always have non-engaging lures. Their use is reflected to some extent on the quality of the hook, but allows you to post without snags. The activity of perch largely depends on the condition of the food supply of the reservoir. Where he does not feel the need for food and where our fishing brother regularly pesters him, use more delicate gear, and most importantly, experiment more with baits.

In terms of habits and addictions, asp among predatory fish that live in the middle lakes is perhaps the most conservative. In rivers and reservoirs, he, as a rule, is “tied” to certain favorite places. Usually these are stretches under rifts, edges, quiet areas beyond the islands. During the hunt, its characteristic routes are clearly traced. However, the choice of lures for him in general is quite wide. As for the tandems, I mainly caught asp on the classic combination of lures: baubles + wobik or streamer.

You can argue as much as you like about the asp's reaction to twin baits: what attracts him more is the “chase” effect, imitation of a flock of small fish, or simply the possibility of choice. But the fact remains. Even the simplest vabik acts irresistibly on a predator. By itself, this bait in the process of uniform posting is devoid of any game, and the asp does not perceive it as sensory organs as, say, a lure or twister. But in a tandem with an oscillating lobster wabik, the amplitude of its oscillations is partially transmitted, due to which its course during attractive wiring becomes attractive. And not just for asp.

Pike also sometimes do not mind to grab the “feathers” on the tee. By the way, if we compare the reaction of these two predators to a particular tandem, we must first bear in mind that the asp as a representative of cyprinids is, of course, less bloodthirsty and aggressive than the pike. Therefore, when choosing asp tandems, we probably should take into account that this predator is more attracted not by the “chase” effect, but by imitation of a flock of small fish. Catching it more often occurs in the upper layers of the water than in the underwater or at the bottom. The possibility of distant casting plays an important role in this.

So, we examined the main features of tandem fishing. To say that dual baits in spinning is always better than one would not be entirely correct. Much depends on the conditions of fishing: the current or its absence, depth, illumination of water, type of wiring and other factors. Well, of course, you need to take into account the inclinations of a predator in each particular reservoir.