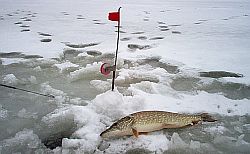 Tactics and techniques of fishing for zerglitsa. Part 3

Verkhovka or gorchak on a hook of a zerglas – this is an appeal for small pike, gnarl or perch. And if in purely perch places such fishing can only be welcomed, then the juveniles of other predators, for example the same zander, should be spared. At the same time, a larger live bait (10-15 cm in the first ice, and 8-12 cm in the dead of winter and the last ice), as a rule, is able to attract a predator more solid, and even more seasoned. Of course, provided that in this reservoir and in this place it is. There are anglers who do not recognize the leash. They argue that without it, the pike takes more often. And indeed it is. True, there are more gatherings. In any case, after catching a pike, it is necessary to check the fishing line that has been in its mouth, and, having detected the slightest roughness, cut off this part and make a new loop.

Most fishers, as I noticed, believe that since a pike has a huge jaw, then the hooks should be appropriate – at least No. 1. However, this is acceptable only during the zhor, when the predator grabs everything indiscriminately. In winter, the pike swallows bait fish relatively slowly, and it is more likely to feel something was wrong. For successful pike fishing, you need to know what they feed in this pond, and use just such fish as bait fish. For example, on the Volga, in the Sknyatino area, in winter the pike more likely takes a ruff and small perch, since they are found in abundance. Closer to spring, she prefers a ruff, moreover, crowded with caviar. On the Ivankovskoye reservoir, where gudgeon, small roach and bleak live in abundance, fishing is more successful on such live bait fish.

Despite the fact that the pike is able to swallow a prey of up to half its length, it usually eats fish up to 10 cm. And before spawning, it needs to be offered live bait even smaller. In general, the size of live bait is a very important factor. Based on my own practice, I came to the conclusion that 8 cm is its optimal length. It is advisable not to use thin fish. The best bait is from the reservoir where you are going to catch. However, some "pike" prefer to bring bait, harvested for future use. This is necessary in bodies of water where there are many pikes and little things. I have repeatedly found myself in a situation where, with great difficulty, I managed to catch a brush. In winter, it is undesirable to bother for a long time with planting live bait: a supercooled fish may soon fall asleep under the ice, and you will wait in vain for a bite. Beginner anglers can recommend two relatively quick and convenient ways of planting.

First: the leash is pulled through the bait fish mouth by the gill cover and looped to the main fishing line.
Second: live bait is picked up from the back, at the base of the upper fin, by one of the hooks of a tee or double. The hook tip must be inserted carefully so as not to damage the spine of the fish.

When catching with winter zerkva, it’s nice to take along a small cage for live bait, which sometimes has to be left under the ice overnight. It is very easy to make such a cage from a fine-mesh grid in which vegetables are sold, and three wire rings. If there is no such cage, you can cut out a similar trough in ice (it is called the “aquarium”), where fresh water would come from a narrow through hole punched by the foot.

As a rule, live bait on the hook should be 30-50 cm from the bottom. To determine the depth, I usually use a special depth gauge: I fasten the load at one end of the fishing line segment and tie a loop at the other. I loop through a piece of dense rubber, put it on a tee and fix it with rubber. Having lowered the load to the bottom, on the fishing line, just above its exit from the water, I note the value of the descent by the Cambrian. I use the same load as a depth gauge when preparing holes. Having set the zerglyza, it is necessary to fill the hole with snow, having built a small slide out of it. This is done to darken and so that the water in the hole does not freeze so quickly. In spring, when there is no snow on ice, they use a special device for dimming.

For a medium-sized pike, it is not recommended to put a wide-bodied bait fish like a scavenger, a sop or a booster. But sometimes in reservoirs where there is a problem with live bait, it is perfectly possible to catch a “spot” of only 5-6 cm in size for imported carp. It is attractive, as we said above, not only for a toothy predator, but also for pike perch and burbot. In March-April, it is necessary to take into account the fact that the abdominal cavity of many predators is filled with caviar and milk. Therefore, catching on small live bait fish with a chasing body is more effective. This can be a roach, a bleak, a gudgeon, a brush and other similar fish.