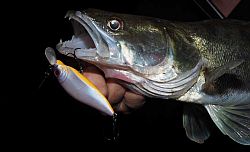 If you have been fishing in one pond for many years, then you get used to it, and when the fish starts to act up, you really don’t want to move to another – it’s better to try to adapt to new circumstances. This is exactly what happened to us this summer at the Ikshinskoye reservoir. Sudak has become very moody here this summer. Not only that, he almost stopped taking the jig – give him wobblers! – so also the biting time has shifted from him exclusively to night hours, and even then only at certain points. When five years ago we began to develop this reservoir, then we went along the “scientific path”: we divided it into sectors and began to study it. At first we went through the next sectors with an echo sounder, determined promising points with a good difference in depths, and then systematically checked them already with the help of baits. Although this practice is troublesome, it ultimately justifies itself.

At Ikshinskoye Reservoir, the bottom topography is very diverse. In addition to the natural irregularities in the form of channel edges and flooded ravines, there are many different ditches and pits left after the dredger. So there is a pike perch where to find shelter. Having worked well in the pond, we expected after that to catch for a long time for our pleasure, without wasting time looking for fish. As a matter of fact, this is exactly what happened until a couple of years ago the situation began to change. For some reason, pike perch was less and less found in its usual places and was increasingly caught on jig baits. Perhaps it simply became smaller, but rather, something made him change his feeding place. Some assumptions about why this happened and who is to blame, we had, but first about the catch itself.

Faced with the fact that zander is becoming more and more capricious in choosing lures, we began to look for ways to solve this problem and soon found out that he now takes the best on wobblers, but most importantly – only at night. At night, zander was caught here before, but mostly those who hunted for captured fish. Ordinary, medium caliber, gnarls could be caught at dawns, and even during the day. Now, however, they have switched to purely nocturnal activity. Therefore, for zander, we now set off at dusk. We load into the boat, light the running lights and always put on life jackets – there are enough drunk and just bad on the water even at night.

Having risen to the first point, we begin to wait for the release of zander. It is impossible to say in advance when it will happen. The difference can be up to one and a half hours: on one day the first exit can be at midnight, on the other – at an hour, at half past one. We carefully start combing the area. Casting after casting, before the first bite or bump. He was lucky, guessed and got to the point where the pike perch begins to exit earlier, then it takes a short time to wait and the bites begin soon. I didn’t guess – you need to decide: either immediately change the place, or wait for the zander to come here. It’s impossible to catch in another way. The first bites, as a rule, begin no earlier than midnight and continue until dawn. They occur at a depth of not more than 4.5 meters. Ikshinsky pike perch is very cautious and even shy. He takes short exits: a few bites – and it all ends, you can change the place.

Now in our navigator the coordinates of more than thirty catching points are crammed. Basically, these are various navels, where the depth is adjacent to the shallow. Points are scattered throughout the body of water: some near the shore, others 60–70 meters away. There are a lot of different elevations of the bottom on the reservoir, but not all of them are working – for some reason it does not reach some pike perches. It is optimal that the difference in depth at the point be from about 1.5–2 to 6–8 meters. It is not necessary that the slope be uniform – it can be done in several steps, but the general difference in depth should not be smooth, but rather steep. Since you have to get up to a maximum of 30 meters from the fishing zone and catch at a relatively shallow depth, the first condition for success is the observance of complete silence. In the boat we are two, the wobblers of each are laid out in advance on pieces of a tourist rug.

Naturally, you can’t drop anything: after any loud sound, you can raise the anchor and change the point. When you want to catch any dumps with a wobbler, the boat is usually stranded, a suitable shade is hooked and driven from the ground aground. If you choose the right model, then you can make the bait move literally along the slope. At first glance, this is an ideal option, but it does not work with Ikshinskiy zander. Having tried this method of wiring more than once, we switched to a jig “classic” – from shallow to depth.

In this case, you have to catch very carefully. At the beginning of the posting, the depth can be 1.5 meters, and the depth of the bait is more than four. The speed of the wiring decides everything: you feel the touch of the bottom wobbler — they are transmitted as light bumps — you slow down the wiring. The task is to catch the speed at which the wobbler only sometimes touches the bottom. When the interval between touches increases, it means that the dump has gone. Here you make a short pause, letting the wobbler float a little, and then start posting in short jerks, forcing the bait to go deeper and deeper until it starts to catch the bottom again. At some point, the bottom touch again ceases, which means that the lure has reached its working depth. Even if it happened still at the dump, it is worth holding the bait in the same horizon for a few meters and only then exhaust it.

The characteristic bottom relief, which most often serves as a parking and feeding place for pike perch, looks something like this: the first edge is at a depth of 2-3 meters, then there is a more or less gentle slope, and then a dump at 5-6 meters. Fishing in such conditions requires accurate selection of wobblers. The main difficulty is that zander, even in the same place, but on different days, can stay at different depths. If he stands at the top edge of two meters, it is more convenient to catch with a wobbler with a depth of 1.5-2 meters, but if the pikeperch has dropped below and is holding at four, then such a wobbler will not be able to drive there. Therefore, in front of each of us on the rug lies a dozen wobblers with a different game and deepening, and at each point the selection of the bait begins anew. The usual sequence is from shallow wobblers to deeper ones.

The size of lures for iksha zander is 65-90 mm maximum. As for specific models, we can mention the Dino Crank SH-75 from Yo-Zuri and Pointer 65 and 78 and the Bevy Shad 75 from Lucky Craft. Of the ZipBaits models, of course, the famous Orbit 80. We have caught good zander on these models more than once, but we must keep in mind that in other conditions they may not work. The color of the wobbler is a moot point, but in this case it is not a matter of principle. The main thing is the necessary deepening and game. We experimented a lot and came to the conclusion that even if the dark wobbler, which has a good game, is repainted in white, the fish continues to peck at it, including at night. More or less understanding the behavior of Ikshinsky pike perch, we began to wonder why he had changed his usual feeding places on deep brow lines and began to feed mainly at night. Our assumption is that the catfish is to blame. The hypothesis may seem implausible, but try to figure it out.

Catfish in the Red Book, and its catch in the Moscow region is prohibited. Perhaps he does not know about this, but the number of catfish in the Moscow Region has been growing rapidly lately. This can be judged by the number of randomly caught specimens. According to our assessment – of course, it is very approximate, over the past few years the catfish has become four to five times more. Now he often takes both a jig at great depths and wobblers when fishing on a track, and the specimens are not the smallest – 5 kg or more. This season in our small company there were 12 cases of breaks and breakdowns of fishing rods due to this fish. Moreover, several times obviously came across instances of 30 kg. It also happened that the catfish had enough strength to crack open the wobbler, so that only the broken off blade returned to the fisherman. On jig catches even more often, but instances are smaller – up to 7 kg.

So, it may well be that the catfish gradually occupies the best pike places and squeezes the pike perch from the depths to shallower and, most important, reliefs inconvenient for the catfish. Why is it that zander has switched to night activity, it’s hard to say. Maybe this is not a matter of catfish, but a high human load on the pond in the daytime.