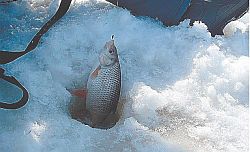 All! On Rybinka, on the Cherepovets side, I went, darling, I went, coming in handy! It. Soroga-ibn-Roach. Marine. The one that has been waiting for more than two months. The one that, after cutting, rests with all its might. The one that makes the thin fishing line of a non-stick fishing rod ring. The one whose silver tint, barely sparkling in the hole, makes the fishing heart freeze. But let's start from the beginning. The current April matinees are distinguished by relatively strong frosts unusual for this time of year. Sometimes at night, the thermometer drops to a point of fifteen degrees. The snow melted over the previous day is condensed and turns into a solid monolith, easily holding numerous anglers rushing to the catchy holes.

So while you can move around the reservoir without any difficulties. Thaws are felt in city blocks. On ice is winter in winter. Only the sun in the spring is taller, hotter and rounder, which makes the face and hands quickly tan, becoming red, so that after a few fishing summer-time bronze. Gradually word-of-mouth information was transmitted from colleagues that from the fishing Mecca – Pavlokovo and further towards the city on the left bank of the flooded Sheksna, as it is now customary to say, a shrimp of three hundred grams began to “turn”. Well, mouth-to-mouth, but checking by yourself is extremely necessary. We decide with friends that it is time to take time off and test the freshly acquired rewind.

In general, it seems to me that someone who once tried even a little bit of successful fishing for non-mounted gear will feel discomfort in the future, putting a bloodworm, worm or maggot on the hook. In trifle rigs, every little thing is important, and the field for experimentation and testing is abundant today. In shops and markets that they just don’t offer: goats, and devils, and urals, and nymphs, and “amphipods,” Well, what can I tell you – you’re in the know. Recently I fell in love – especially after meeting my fellow spirit from Rybinsk Lesha Galkin – black "bananas" with a variety of beads. They decided not to go to Pavlokovo, as kind people advised me to go to Myaksa. There, five hundred meters from the shore, a freakish snag the size of a good football field, no less. Depth is about four to five meters.

We arrived at about nine in the morning. Despite the sunny cloudless morning, it was noticeably cool. In addition, a moderate northeast wind blew. More than a hundred fishermen have already gathered at the catchy place. Many decorously sat apart at a respectable distance of ten to twenty meters and sluggishly played with nods, glancing at their neighbors. This went on for about forty minutes. During this time, my friend and I got a megaersh and a ten-centimeter goby. I don’t presume to classify it precisely, but earlier I had caught the same ones at Rybinka, however, two times less. According to my observations, bulls in the Rybinsk Reservoir began to come across relatively recently, over the past eight to ten years.

Suddenly, among the bored colleagues, revival and fuss began. Fifty meters from us, two lucky men caught a few carpentries. From different sides to the "epicenter of indignation" the afflicted began to flock. Someone, not at all embarrassed, and without a shadow of doubt, asked their quick-witted colleague to remove a leg that was too outstanding and “unnecessary,” in his opinion, so that it would not interfere with drilling a hole closer. Yes, alas, with such things in our area do not stand on ceremony. Say do not say – it is useless. One will leave, two will sit in his place. And not the fact that they will be “more intelligent” than the first. We decide to stay at a decent distance from the crowd. If the shrovetide moved, you just need to search and find "your" place. Almost every third hole turns out to be snag. It is not a fact that there is fish near it, but it takes longer to linger in such places.

And on the fifth hole, a friend makes a short tack, and the tug of war begins. The small forest is thin, soft, specially selected so that various nuances of the game are transmitted without delays and flaws. Only a meter can be lifted – and the “friction clutch” creaked: between the fingers the fishing line goes down again. Has stopped. Pause: who is who? And again she began to go upstairs. So the head appeared. Now it’s better to take with your hand, despite the frost and wind. If you don’t want to wet your hand, you rely on the fishing line – and in a moment you will lose your catchy mormyshka. A fish for four hundred grams! Soroga-ibn-Roach. Marine …

I sit next to me. It’s good to ride with friends: one I found – she’ll always let her go closer. But it was not there! I’m already doing the fifth bite-free wiring, and my friend is taking the third fish out. I understand: no, a freebie today does not work. Ledobur in hand – and went to seek his share. Here is a patch of pure snow, not a single hole nearby. We ought to try … The hole in the fifteenth drill rotates easily, despite good ice sixty centimeters in ice. I do not clean the hole, albeit deeply. He poked a small hole with his wand – and okay. Mormyshka, although tungsten, but small, sinks to such a depth for a long time. But here is the bottom. Or not? I’ll raise a little mormyshka – it falls to the “bottom”, I’ll swing it a bit – and it fails for another twenty centimeters. Yeah, scum, therefore.

Well, let's go. Knock-knock on the bottom, and slowly, with a pronounced frequency, I begin to raise. One, two, three … And something seems to have changed … It's not that the nod is bent or straightened. I didn’t even catch what: maybe the crappy breeze blew a little harder, maybe the mormyshka’s crust touched, or maybe it brought some micro-muscle into her hands with a micro convulsion … But he pulled it up briefly Oh! The severity of stopudova weights! The line between the fingers slipped and began to flatten, stretching in depth, into the distance, upward, thousands of kilometers away, into the blue skies … Where did the intoxicating fishing soul swiftly rush. Here she is! Do not confuse with anyone! Soroga-ibn-Roach. A pound, no less.

With a trembling hand, I release the mormyshka and, without hiding, I throw a fish nearby. And again, the fishing rod is ready for battle. And again a barely perceptible bite, Yes, you all know without me! So they spent the whole day with a friend, each on a nickel of five holes. But on "his", personally found. And no one came to drill or with a kind request to move. Because today it was pecking at everyone who wanted to catch. And most likely, tomorrow will be pecking. Since – everything! Gone, darling! Soroga-ibn-Roach. Marine ….