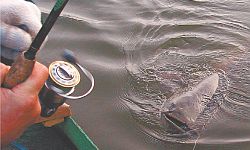 When choosing a coil, the question often arises of the difference between power and speed models. The main problem here is the gear ratio of the coil. I must say that the first high-speed models of those that are now used in match fishing appeared much earlier than this type of fishing. One of the first such coils began to make the company Mitchell, which released a series of "Quartz". Coils of this series had a gear ratio from 4.2 to 7.2 and were intended for fishing trout in mountain streams. The peculiarity of such fishing is that if the wiring goes against the current, then the winding speed should be minimal: the flow of water helps the bait to work. But when casting upstream, which is preferable when fishing for trout, the reeling speed should be maximum to compensate for the flow rate.

When match fishing began to gain popularity, it initially used conventional reels. However, it quickly became clear that most of the fishing time was spent on unwinding the equipment from a long distance. So there was a demand for coils with a large gear ratio. At first glance, the higher the gear ratio, the better, since with the same success it is possible to carry out high-speed posting when fishing for asp and the slowest when fishing for pike on wobblers. However, it must be borne in mind that with an increase in the gear ratio, the power of the coil drops sharply. From my own experience, I can say that with a 6: 1 ratio, there can no longer be any talk about power spinning fishing.

Therefore, coils with a gear ratio from 4.2 to 5.2 are quite suitable for spinning. In the middle lane, where trophies of more than 2 kg are rarely found, coils with a gear ratio of 5.2 are suitable, and for heavy jig it is better to use models with a number of not more than 4.7. There is an opinion that Daiwa coils have a power orientation, and Shimano products are high-speed. This opinion has been around for many years, and it is difficult to understand what it is based on. Both firms have very wide lineups, and in each one you can choose models with any characteristics, so the choice mainly depends on the taste and habits of the angler.

Many anglers are confident that the front clutch is most suitable for spinning, the rear – for other types of fishing. One could argue with this if I myself were not a supporter of using reels with a front brake in spinning. True, this is largely due to my habit: I once started with our native "Dolphin". Nevertheless, the models differ in a purely constructive manner, which may be important when choosing a coil. At the rear brake, the axis passes through the entire coil and friction washers are at the very end of the housing. This slightly reduces the braking force, and in addition, imposes a limit on the size of the washers, as large simply have nowhere to put in the case. When the washers are located in a spool, the diameter of which always exceeds the width of the case, they can be significantly larger both in size and in quantity. The only plus of the rear clutch is that the spool can be changed in one motion, unlike the front, where you have to unscrew the adjusting nut.

There is a joke: the quality of the fishing line on your reel depends on how rich you are. As with any joke, there is a significant amount of truth. The fact is that in recent years, mostly braided cords have been used in spinning. With all the advantages, their price is quite high and does not fall below 500 rubles per 100 meters. In addition, if such length is sufficient when fishing for ultralight or light spinning, then in a heavier spinning, even more unwinding is required, so the price of the cord increases significantly. The quality of laying the cord directly depends on how long it will serve you. If bumps and dips appear during winding, then when casting, loops will fly off the spool, which often ends with knots and cliffs.

The quality of laying largely depends on the accuracy and quality of manufacture of the coil mechanism and the quality of the assembly. Bad winding is either due to poor-quality machining of the parts of the mechanism, or due to improper position of the spool on the shaft. In the latter case, it can be corrected using shims. If the winding is shifted to the rear side, you can remove one washer from under the spool; if the line "runs" on the front side, you have to add the puck. This work is quite painstaking, since it is impossible to say in advance what thickness the washer will be required. Many manufacturers supply shims in the kit, in other cases they have to be manufactured independently. When adjusting, keep in mind that you need to start with the thinnest washers.

At one time there was a fascination with coils equipped with spools with a reverse cone: the front end of such a spool has a larger diameter than the rear. This system was developed by Daiwa – according to the designers, such a spool can improve winding and reduce the possibility of dropping loops. However, if you look at the matter carefully, you come to the conclusion that the conicity of the spool is most likely to do with it. I caught a lot of such coils and I can’t complain about them, but I definitely can’t say that it is precisely thanks to the inverse cone that I still don’t take it. On good models, loop loops are generally extremely rare, so perhaps the whole thing is not the inverse cone, but simply the high quality of the mechanism.

Recently, almost all reels, starting from the middle price range, have been cross-wound, which avoids forcing the upper turns of the fishing line into the lower. This is achieved either by using an endless screw, or by using gears with a certain step. On more expensive models, more complex types of winding are used. In particular, the Twin Power FA series has an S-system, in which, during rotation of the coil, the stem comes out faster and returns more slowly. On Daiwa models, a different system is used, but the result is the same: even winding is ensured, eliminating winding down.

It is believed that the spool rim must have a titanium nitride coating. It is a very hard alloy and quite expensive. If the rim is anodized by him, this is certainly good: the surface quality of the spool rim largely determines both the casting distance of the bait and the service life of the fishing line, especially braided. Therefore, many believe that the harder the side and the better polished it is, the better. This is true, but there is one “but.” These spools must be handled very carefully. If a chip occurs on the side coated with titanium nitride, it will not be possible to polish it and you will have to look for a new spool. But an ordinary metal side, even made of titanium, can be polished, although this is best done not at home, but in the workshop. Now the coils of the middle price group are often equipped with plastic spools with a metal side. This is also quite a working option: their service life is less than that of whole-metal ones, but the price is much less.

What to give preference to

The last thing I would like to dwell on is the question that customers in stores often ask. What to give preference to: products of little-known firms or cheap series of grandees of reel building? At one time, the answer was obvious: albeit a cheap coil, but from Daiwa or Shimano. However, now many of the patented designs of these companies are used by other, smaller companies. Sometimes two firms start co-production. In particular, Cormoran produces very good coils together with Daiwa, and they come under the Cormoran logo, but are manufactured in the same factory as Daiwa.

And yet, based on my experience, I can say that if there is an opportunity to buy a good reel of a well-known company, then you should go for it. For example, the resource embedded in the Certate from Daiwa or Twin Power PG series from Shimano is much larger than in the cheaper series, not to mention the products of small firms. If it’s difficult to make money, it’s better to dwell on the budget series of famous companies. Quality control here, as a rule, is significantly higher than in smaller industries. In addition, on such models earlier than on competitors' products, new developments and technologies begin to be used.

Choosing a reel for a new gear, do not be fooled by the advertising promises of manufacturers. There are no miracles here, and a high-quality reel will never be cheap. But on the other hand, among the many proposed models, it is quite possible to choose a working option for more or less reasonable money. To do this, you just need to clearly imagine what exactly you need, and not attach too much importance to various fashionable attributes, which by no means always turn out to be justified in practice.