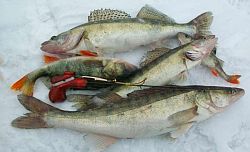 Pikeperch and bersh on the Volga and Sura

Sudak and bersh at the Cheboksary and Kuibyshev reservoirs have been crushed recently. This has been discussed for a long time on the Internet, and on the shore after fishing, you can increasingly hear the complaints of bershatniks and cobblers. For me, an avid perch, for some time there was no time for their problems. Perch, and quite solid, was pretty tolerably caught in the islands. According to the first ice, the simple vertical line worked very well with standard wiring, a little later it was necessary to switch to the mummy muscle game, and in the middle of January it pecked at all only to mormyshka. However, in the twenties, I switched to balancers and caught perch pretty fun.

Pike perch and bersh themselves reminded themselves of themselves with frequent bites in places atypical for them: they grabbed perch tricks on the shallows with depths of 1-2 meters. Volga fishermen are well aware that bersh and zander must be caught at 4-6 meters, no less, and someone will even say that at ten. I was completely intrigued by the capture by a familiar balancer on a perch crayfish perch by almost 4 kilos! About a long time ago it was not heard, especially on city fishing.

After a long break in the pike-perch-fishing, I suggested that my friends go for pike-perch in Shomikovo. At first they rejected, said something about the good biting of a match perch near Krasnaya Gorka, but in the end, my methods of persuasion worked. In Shomikovo, I had caught several times before, of course, there are many good places here, but I did not remember all of them. However, it was not worth showing, therefore, having walked 200 meters from the coast along the line of the first black beacon, I confidently drilled, praying that the fishing line would be enough to the bottom. Nearby I drilled a couple of holes for tackle rods, which recently most often are caught on our Volga bersh and pike perch. Up to six deliveries will be put in line and they will immediately observe everyone.

I am not a big fan of such fishing and quickly forget about stalls, start running and drilling, actively teasing fish with a piece of tulka. I change the wells every 5-10 minutes, as perch usually do. But bersh is not a perch, he is lazy, he must be teased. So my friend, who has been catching on his first and only one hole for half an hour, proves this to me: he cuts and throws four hundred grams of bershey on the ice. He was distracted by it and missed the bite: someone confidently bent his nod while the fishing rod froze. Sekou, but late. I begin to play with a little mormyshka, and now – the drummer, sits. A half-kilogram lump was my first fish. There were no more bites, although we changed the holes, went down the beacon. Then they decided to go to the level of the second beacon, especially since two fishermen were sitting there and seemed to be catching. We drilled about fifty meters from them. I didn’t get the bottom. For fishing at a 20-meter depth and a powerful course, we were not ready. We decided to go back under the first buoy.

In the very first hole, as soon as the mormyshka with the tyulka fell to the bottom, a bersh was taken from Denis. He took it, Denis hooked, but, lifting it by half a meter, he gave a slack, and the bersh unhooked. The fisherman threw the mormyshka to the bottom, and the bersh attacked again, but did not catch it. The audit showed that the fish ate pieces of sprat on both the mormyshka and the leash located above. The greedy bersh was not even embarrassed by the fact that he had pinned. The freshly planted tyulka bersh again attacked and replenished Denis's catch. Thinking that there was a lot of bersh under the hole, my friend sat for a long time without bites. And I drilled and drilled, but I didn’t have any luck at all – not a gag. In the next hole, finally someone pushed languidly. On the second attempt, we managed to detect 100 grams of bershik. Through the heels of five holes of another one of the same. Denis, having decided nevertheless to change the hole, immediately caught a bersh. It was getting dark fast. In the end, from an attempt, probably the sixth, I managed to detect a six hundred gram bersh, which really lifted my mood.

Our first pike-perch-fishing was not very optimistic. There was no major zander or bersh. On the shore, all the men complained about the same. Someone did not see the bite at all. Hearing that for two we took a dozen tails, they said that we were lucky. The next time we first went to Sura. Familiar acquaintances caught a good week during the week: there was a bream and, most importantly, good zander. To the left of the bridge, upstream, there are more fishermen than to the right, just five people sit below the bridge. However, acquaintances said they pecked below the bridge. Throw a coin. Twice. And both times goes to the left side. Ok, let's go left. Drilling right under the base "Surskie Dawns".

In the very first hole, Denis is pulled out by a bersh on a tyulka. Andrei and I are quiet. When Denis misses an impressive pike perch under the hole, we densely drill his hole upstream and downstream, which, by the way, for some reason does not exist. Denis misses another zander, and his bites cease. We look further under the right bank, then I go to the channel, then under the left bank. Along the left bank I go downstream and meet fishermen I know: they say they caught one bersh. Without lingering in one place, we move downstream, looking for an active flock. Now they have descended below the bridge. Here two catch on a sprat: they sit on the same holes and with enviable constancy they pull out either a bersh or a pike perch. Spinning around, we catch one bersh. And by one o'clock in the afternoon we suddenly break off and fly to Shomikovo. When we approach the Volga, I call up a friend who remains on the Sura. He caught two zander, one and a half kilograms and grams for seven hundred.

In Shomikovo we are drilling our old place and are actively looking. Two dozen holes that we manage to make before the end of the day do not bring a bite. Judging by the last zander-bershino fishing, on the Volga I completely crushed the fool: I now sound a pound. On the Sura, zander is on average larger, more often individuals per kilogram are found. And what is the reason for this grinding? Many say because of networks. But at the same time, the load on networkers is also not weak on the Sura, and the river itself is much smaller, but the zander is larger. In a word – a riddle.

Looking for fish is useless now. You need to look for places: dumps, snags and others, and the fish will find you by itself. All those who more or less successfully caught on their last fishing trips did not practically change their fishing places, but rather they landed on well-known points. But not everyone is able to catch a whole day in one or two holes. At least it’s very difficult for me to sit still: I want to run away from a passive fish in search of an active one. But the trouble is that there seems to be no active. Deaf land, however.