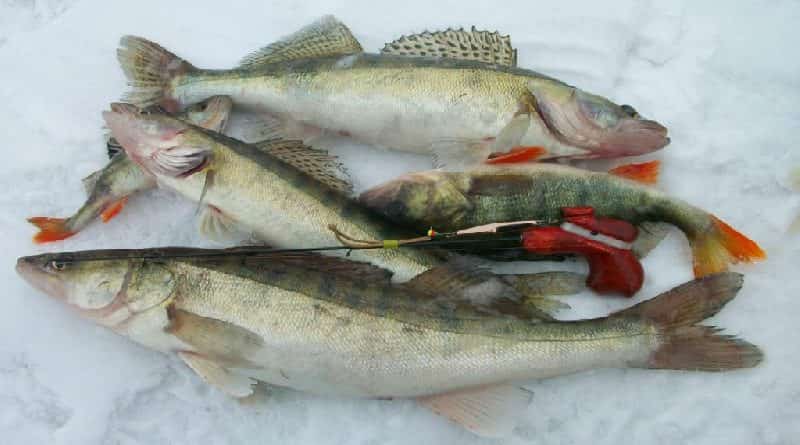 Pike perch on a winter night

Night. People on the ice wave their hands, illuminate with flashlights and do not stay in one place for a long time. When you first see it, you might think that these are poachers. Anyway, that’s exactly what I thought when faced with this fishing many years ago. Then I was mistaken for a poacher, especially when my partner and I were catching pike perch next to the tents of the breeders. Pike perch, as they know, constantly accompanies bream, however, they did not immediately understand what we were doing.

Night fishing for pike perch with spinners or balancers involves an active search for fish and lasts, as a rule, until midnight, at least until one in the morning. It is difficult to fish longer: fishing takes a lot of energy. It’s one thing to sit in a tent with a torch, and quite another to move a lot on the ice and drill in the cold, and even with the wind. On a large reservoir, say, on the Yauzsky reservoir, a GPS device is needed. It allows you to accurately go to the areas where you can count on a bite of pike perch, and to return in the dark, otherwise you can wander until the morning. On water bodies where fishing takes place in the zone of accessibility of coastal landmarks, everything is a little easier. So, in the upper reaches of the Vazuz reservoir, where I have been fishing for many years, the coastline itself serves as a fairly reliable reference point. However, in any case, you can only go to familiar places for night zander. As a rule, knowing approximately the area where the pike perch is located, they go fishing at dusk and prepare the holes. If fishing is multi-day, then you can go to the same holes to “harvest” every evening.

During the day, pike perch is most often caught at the base of the channel edges, at depths of up to 10 meters. These areas, of course, are worth checking out in the dark, but it doesn’t make sense to stay on them for a long time. Shallow-water irrigation with depths from three meters to half a meter is much more promising. It is widely believed that the predator goes into shallow water only on the last ice. This is true only for pike, and zander is caught here throughout the winter, but only at night. The daily movements of pike perch are mainly associated with the movement of schools of fry. As in summer, in winter at dusk the fry moves to the coast to a shallow depth, followed by pike perch.

In general, during the day, pike perch moves quite actively through the reservoir. It is found at the base of the channel edges, and on dumps, and at the upper edge, and on irrigations. The only place where it can be caught at any time of the day or night is snags. Catching pike perch among snags is not easy. A good cut in such places becomes an essential piece of equipment. Moreover, the detachment should be as strong as possible on a cord with a diameter of up to 3 mm. Many designs of cuts have been invented, both the simplest ones and with all kinds of grips and latches. In my experience, vertical lures can be freed using a variety of options, and the balancers can only be freed with a load with protruding metal cable loops, the so-called wobbler release. There are hooks and the cut itself. Last year I caught pike perch near flooded tree stumps. Two bites of walleye, the third – a stump. As a result, after six pike perch, I left both a catchy balancer and a cut-off on the stumps.

In tough, tricky places, most anglers switch to vertical lure fishing, but this does not work everywhere. So, on the Yauzsky and Vazuzsky reservoirs, as I have been convinced more than once, the pike perch takes on them much worse than on the balancers, but the spinners work pretty well on the Rybinsky zander. In the snag, where the pike perch keeps constantly, I immediately drill holes in a checkerboard pattern, up to 30-40 pieces, depending on the thickness of the ice, and then fish them in a circle. Unlike pike, which, if not in the hole, is unlikely to fit, the zander moves more, so even if there were no bites in the hole, it should be checked several times. In addition, pike perch can stand nearby, but decide to bite only on the second or third run. Of course, you try to return to the holes where there were bites more often and try various baits and wiring on them more often. In any case, you have to move a lot, since a bite can occur on any hole.

Unlike summer, in winter, at dusk and even in the dark, a perch is good, and often large. Sometimes he begins to bite only at nightfall and in those very places where there was not a single bite for the whole day. There were cases when at one point, where there was no peck at all during the day, at nightfall, in just an hour I caught a full box of large perch. It seems that he did not move, but stood all this time in the same place, but did not take. The same thing often happens with pike perch: only one or two in the daytime, and in the dark on the same holes there are more than a dozen, and it can bite all night. However, it happens that pike perch does not take well at the most promising place both day and night. At the same time, in some ten meters, but in the shallows, where during the day there was no pike perch, a real zhor begins.

The weather influences the biting in winter no less than in summer. It bites best in the night frost up to 10-15 degrees with a clear sky with the moon, but in the thaw, the pike perch takes worse, but the pike becomes more active. If we compare the winter activity of pike and pike perch, then in different water bodies the situations are noticeably different and depend on many reasons. For example, after their creation, the Yauzskoye and Vazuzskoye reservoirs were stocked with a predator almost simultaneously. But at Vazuzskoye, the level regulation regime was stricter: water was discharged almost to the riverbed before winter. And the pike perch rolled down to the lower reaches, to Zubtsov. As a result, for a long time, pike perch in winter in most of the reservoir was caught poorly, and pike was good. Over the past few years, the level has not been decreasing so much, and pike perch have started to come across more and more in the upper reaches. Basically, however, medium-sized, up to 1-1.5 kg, although there are bites and trophy specimens tearing a monofilament 0.3-0.4 mm.

Tackle for catching pike perch is not particularly delicate. I use a stiff rod with a small summer reel. This is quite a working option. The main thing is that the reel has a deaf brake, otherwise it is difficult to catch zander. Monofilament line, 0.35-0.4 mm in diameter. A leash is required. I use a 7×7 leash material. Leash length 20 cm, connection to the line through a swivel, at the end of the small fastener for quick lure change. Despite the widespread belief that pike perch reacts very painfully to a leash, its presence has practically no effect on the results of night fishing, but it adds weighty pikes to the catch.

The choice of balancers mainly depends on the characteristics of the reservoir. On each one can highlight the models that work better than others, so when going fishing, it is worth talking to those who are constantly fishing there. Perhaps the only thing that should be done with almost all balancers is to change the standard tee to a larger one. This reduces the number of zander descents. Although the pike perch resists much weaker in winter than in summer, the hook is always necessary: ​​at the very hole, even a small specimen can throw out anything.

The success of fishing with a balance beam largely depends on the correct game of the bait. When fishing for zander, it can be very diverse in frequency and amplitude, height and rate of ascent. Starting fishing for a hole, as in the case of a perch, you should knock a little with the bait on the bottom. Then a short, 10 cm, soft rise, a short pause and release. It is advisable that at the first postings, the balance bar strikes the bottom tee against the bottom. This, of course, is fraught with a hold, but it attracts zander well. Then the fishing of the higher horizon begins: although the pike perch is larger than the perch, it gravitates to the bottom, but it can stand a meter higher.

The technique is simple: rise – pause – release. You can tease the predator a little by activating the game: rise – and immediately reset. Several posting options have to be alternated in order to choose the most catchy one. But in general, I try not to linger on one hole for a long time, maximum 5 minutes. During this time, the pike perch usually manages to somehow manifest itself. As a rule, for fishing I go around all the prepared holes two or three times.

Although zander fishing is very individual, especially at night, you cannot go fishing alone. This activity is not only very interesting and gambling, but also extreme. Anything can happen, and you need to be ready for it. For example, last year, in the upper reaches of the Vazuza, there was simply a dangerous situation: hunting dogs raised a bear from a den, but let it go. So until the huntsmen informed everyone that he lay down again, the fishermen went out into the night only in a large company and, if possible, with guns. Night catches of pike perch, however, like daytime ones, are very unstable, nevertheless, the chances of catching large specimens are much higher. However, as always, the catch depends on knowledge of the reservoir, skill and, of course, luck. There are outbreaks of biting of pike perch throughout the winter, but from the beginning of March, the pike perch becomes more active. A good bite, as a rule, lasts until the moment when it becomes dangerous to go out on the ice.