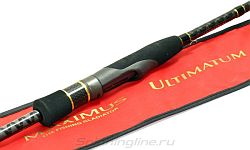 Mid-price spinning rods are by far the most sought-after segment in Russian fishing realities. Many anglers do not want to overpay for the “name”, and relatively inexpensive poles over the past couple of years have significantly added to the quality of performance and characteristics. As a typical representative of the people mentioned above, I have been looking for a “coast guard” for myself for a reasonable amount of money with a test to an ounce and characteristics that would suit me. I will not go into details talking about the pangs of choice, but in the end I spent the last season with the MAXIMUS Ultimatum 27ML and today I can say that I was completely satisfied with the model I purchased. In this article I will try to describe spinning and its operating experience.

The first thing a buyer in a store pays attention to is appearance. Maximus Ultimatum in this regard is not a particularly prominent stick, but upon closer inspection you can feel the design and study of small things. A spaced EVA handle with carbon inserts, a convenient Hook Keeper, Fuji reel seat, Mini Guide Kigan Zirconia rings – all put together. And assembled at a high level. This becomes clear as soon as the stick falls into the hands. The entire line has very light and at the same time strict forms, specifically my model with a length of 2.7 m weighs only 118 grams. Delicately, isn't it? Of course, the form with such lightness should be thin-walled and overloads are strictly contraindicated for it, but Maximus has rather more hardy models. In addition, in addition to the already beloved by many “old-timers”, in 2018 there were already three of their more budget fellows: Advisor, Gravity and Zircon. So the company also does not forget about fans of new products and those who are not afraid to overload spinning a bit.

All new items have a jig focus and are made using high-tech materials, but with a view to more severe operating conditions. Thanks to this approach, the sticks add a little weight, do not lose much in sensitivity and at the same time remain attractive at a price. Therefore, today it is Maximus Ultimatum that remains the flagship in the Maximus line for lovers of lightweight rods and so far, in my opinion, has practically no analogues in the price segment. Its versatility is particularly striking. He turned out to be good both in jigging, and when fishing with wobblers, and swinging whales with turntables is not a problem for him, and there are no questions about sensitivity even on the lower bounds of the declared test. Moreover, despite its length, due to its weight, waving it all day is not as problematic as it might seem at first glance. This is better to stop and consider each type of fishing in more detail.

Jig – the very first direction for which I would advise you to buy it. The stick perfectly copes with any postings that are so necessary when fishing for a wide variety of silicone, and not only lures. To knock under ideal conditions on a hard bottom and when using a thin cord (0.8 according to the Japanese classification), the Maximus Ultimatum 27ML starts with 6 grams, which roughly corresponds to the declared bottom of the test. Starting with 10 gr, distinct and clear touch of the bottom on the first fishing trips can be confused with bites. The upper limit on the weight of the used baits seemed fairly honest to me, since 25 grams decently load the form during posting and it is not so comfortable to use the active animation, which I love so much. Despite this, I still tried to slightly overload the stick in order to find out its capabilities with the declared test. And to be honest, 28 grams plus a not very steaming 3 "long bait is the limit that I was afraid to go beyond.

Still, the thin walls make themselves felt, and the stick simply falls already on the cast. About comfortable fishing and posting thoughts no longer arise, just as there are no questions about the throwing qualities of this model. Bouncing throws in the middle of the test succeed “with a bang”, and often the line at 60-70 m does not seem to be something outrageous. Therefore, all lovers to hunt for zander from a distant edge or chase a asp, the stick should definitely "lie in the hand." For those who are interested in what it is capable of when casting on the upper and lower borders of the test, I can say that the Maximus Ultimatum 27ML for its structure behaves predictably and with a proper approach to casting will not completely disappoint its owner.

But what about fighting?

In addition to all the advantages of this model, I can note the excellent penetration and viscosity of the spinning rod. Most of the caught pike perches were cut through without any questions, and the pike with their loose mouth Maximus Ultimatum 27ML did not leave any chances when fishing, even despite the fast formation in statics. The form showed itself perfectly under load. Turning on completely after hooking, he perfectly fulfills all the jerks of a predator and simply does not allow him to get off. Thanks to all these qualities, I opted for this spinning and still believe that I have not lost.

Wobblers and other lures

It would seem that wobblers and a long stick … What could be common? In Russia, these concepts are not so often intertwined, and such a question rarely torments a typical fisherman. Although, for example, in the same Japan, in pursuit of the sea bass, top companies produce sticks for fishing for wobblers over 3 m long, and all this is in great demand. Such fishing remotely resembles our asp fishing, but besides it, in Russian realities there is someone to hunt with non-standard long spinning rods. For example, with my Maximus Ultimatum 27ML last year, I perfectly caught a different predator on small rifts sharply breaking off into the depths. Here, with short sticks, the lace would simply rub against the edge of the edge, the loss of wobblers and diverse iron would be catastrophic, and heavy 3-meter “clubs” would not allow comfortable throwing and catching.

But thanks to the light and long Ultimatum, I almost 3-5 days tirelessly threw 3-5 grams of wobblers, turntables and castmaster for 25-30 meters and perfectly dodged obstacles. Immediately after the most powerful bite of the chub or asp, we had to force the survival of the chub and literally throw the hooked fish over the edge of the edge. At dusk, this brow was visited by pikeperch and pike, which they also managed to cope without any loss. And all this thanks to the easy, verified form of Ultimatum. The stick worked out with a bang!

Maximus Ultimatum 27ML is not the kind of spinning that can be heavily overloaded and give extreme angles in fighting. With a careful attitude to him, he will serve for many years faithfully. At the same time, long-range casting, sensitivity and ease of tackle will become something commonplace and inalienable in fishing. The company's engineers managed to make a very successful model, and although, as you know, there is no limit to perfection, the Ultimatum 27ML is definitely close to it.