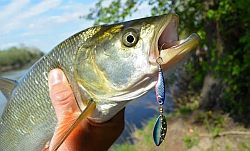 This tackle is sometimes called the herringbone. She is well established in catching asp. Its essence is as follows. A removable leash with a length of 70-80 cm is taken (there are several such leashes, so that in the event of a break, quickly change to one another). At one end of the leash is a slider for connecting with the main line, at the other – short (50-60 mm), but heavy lure with a tee at the end (10-12). You can make such a spoon from a finished small oscillating, weighing it with solder, or you can cut it out from a multi-faceted rod (brass, iron). It is necessary to cut approximately at an angle of 30 degrees with respect to the axis of the bar. It is better if the lure will be with anti-corrosion coating. Then, throughout the entire length of the leash, starting from the swivel, 3-4 short leashes about 15 cm long each are tied up.

At the end of such a short leash a small "fish" is tied up. It is done as follows. From any thin, better than stainless, tin plate is cut, shaped like an elongated ellipse with a size of 25-30 mm by 7 mm. This plate bends slightly along its major axis, and two single hooks No. 7 are soldered to it, one being without an ear. It is desirable to cover the soldering places with red waterproof paint. Imitation of a small fish is ready. Such a tackle creates an impression of runaway fish when it is wired, and the predator, of course, does not hold on – will rush to catch up and catch. Immediately followed by a sharp cutting, and now you are pulling out the desired prey – handsome asp!

On fast and strong rivers, the asp is caught with the next tackle. By the end of the fishing line tied "bullet", and above put on a short (1.5-2 cm) hard leash front leash. "Bullet" is a piece of lead with a tee sealed into it and a swivel ring. Length – 5-6 cm, the shape of it resembles an olive. Its weight allows you to throw bait 50-70 meters. Fly doing so: to the strong well-sharpened hook 8-10 with a very long forearm primatvayut dark (black, blue, green, brown) 3-4 small threads, 4-5 cm long. Feather. Their general tone is preferably light gray, it can be made, for example, from white, gray or bluish feathers. Sometimes a fly made of light brown and black feathers is preferable, so you should have musters from different feathers and experiment during fishing.

When rewinding the fishing line, the "pelka" imitates a fish catching up with another smaller one, that is, a fly. The combination of the two baits is very attractive predator. Large ashes can grab the "bullet", but usually they, and the average, and even smaller specimens are more often tempted by the sight. Although the asp has a relatively large mouth, it prefers a smaller sacrifice. In the early and evening dawns, the asp is especially active, and is therefore often less picky. It is not difficult to find him on the river: before reaching the water, where he stands you can hear or see powerful predator bursts, to notice how, after hitting his tail, he was stunned from the water, sometimes jumping like frogs jumping lumps. Small (up to 500 g) asps prefer fry, which are not stunned by the tail, but simply picked up when it rolls from a roll into a hole. Therefore, only boiling from constantly diving asps is seen on the water.

To the shore should be approached as carefully as possible. If the asp beats close, you need to hide behind any shelter – a bush, a tree, or just crouch, otherwise, noticing the angler, an extremely careful asp will not take even the most seductive bait. He is a little braver only when he is standing in a huge flock and far from the coast at a great depth. That is why it is better for a beginner to search for flocks of asp, rather than solitary, fearful and cunning fish. When the wind, especially on a cloudy day, due to ripples on the water and poor lighting, the asp sees the angler worse, lets it closer and boldly takes the bait. But on such days the predator is harder to find, sometimes it doesn’t hit at all and only an experienced angler who knows the traditional sites of the predator’s stare can look at the water for a long time and see barely noticeable movements similar to the jelly that the asp creates with its dorsal fin .

“Pulka” is sent in such a way that it falls into the water 2-3 meters from the place where it hit or something else gave out the asp. It is advisable to throw the bait upstream so that it will carry it to the right place. Then, without letting the bait go to the depth, as soon as possible reeling the line, they lead a "bullet" and a fly on the very surface of the water. Sometimes the fly even jumps out of it, which especially attracts asp. He can grab the bait a second after it falls into the water or take it after a short posting, and it happens especially in cloudy weather that he takes a “bullet” or a fly almost at the very feet of a spinning machine.

And the last. If you are sure that the asp is in one place or another, but for some reason does not take, change the fishing tactics. After a very fast posting, pause, let the bullet and the gun go down and go some time in the bottom layer of water, then quickly pull the bait to the surface and let it sink again. Such techniques are very effective and sometimes the asp is tempted better than the usual, monotonous wiring bait.

Wobblers for fishing in the upper layers of water
The tricks of the little bait. Part 2
Winter suits Alaskan NewPolar and Alaskan Kiana
Tags: asp, hunting