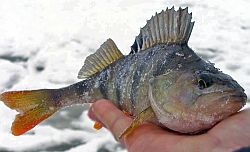 Fishing on the Karpovskoye reservoir

Imagine that for two consecutive weeks people go to the Karpovskoye reservoir every other day and report good catches. They write that often tears the bream fishing line, and scammers of 500-700 grams are not uncommon. And all this time you go somewhere completely wrong. And your every fishing job: searches, experiments, creative approach. How long to?! I want, finally, just to come and not look, but to sit down and catch fish where it is! Moreover, even the coordinates of the treasured holes are crammed into the navigator. It's time!

This is what I called the place from where fishing reports on good roach catches came with enviable regularity. Our tireless Stas1as zealously monitors cleanliness on ice and demands it from others. For this reason, dissatisfaction was expressed on the site about candy wrappers left near the catchy hole. So, when we went to the point on the navigator, the hope was burning in us that no one had come over the night and swept these same candy wrappers and we would find the treasured hole! Instead of candy wrappers, they found Stas himself. So we are here! A sacrament called “ches” will begin now. Before drilling the holes, we stretched our lower back, fingers and cervical vertebrae – after all, catching roach one by one is a very difficult task for a well-trained angler! I even took a bag with handles with me so that a lot of fish could be carried away!

However, large selective roach the size of a palm flew rarely. More often ordinary, in the half of a palm. I was content with careful bites and was not going to sit on one hole, although in principle it made sense to just sit and wait for the fish to find you, because this nickel is fed almost every day! I began to drill holes with obvious signs of feeding and at the same time get acquainted with the relief. As Stas explained, beneath us is a local beam, which is located next to the branch of the flooded railway. Indeed, the nickel had its edges, pecking more often closer to the dump.

I spun around a penny, making three or four entries in each hole with a little devil, I caught a couple of roaches, and now my eyes settled on the hole, which was fed with steamed wheat. I don’t know why, but in my subcortex it has long been settled that serious anglers feed the bream with steamed wheat and do not exchange for any bran or gruel there. On the ice lay the remains of this same bait, in which I examined pieces of oilcake. Need to try! It was drilled side by side, a depth of about 5.5 m. From the first postings, it seemed that the hole was alive. Something is somehow wrong. Either hurt something, then at the very top a little hold, then suddenly the gatehouse straightens. Moreover, the breeze presses tightly. You have to put your feet so that the nod is blocked from the wind. I spend the fifth time – I can’t cut anything. It's time to change the hole. I look, Max is coming to me.

I think I'll wait for him. I decided to make an exemplary wiring from beginning to end, but as soon as the rhythmic swings reached the level of my fishing box, the gatehouse stopped listening to the fishing rod and I hooked. It's stupid. Fishing line 0.125 mm. The wind spins the fishing line in front of me, brushing it off, at that moment the fish pressed down and pitted the fishing line between the fingers. I had to get up to blow the excess fishing line with the wind. Again she crushed right before the hole, refuses to go into the hole. Max is standing nearby, waiting for how it will end – I even started to worry. But the head-snare appeared! He took it by the head with his hand – the scavenger climbed freely into the hole, which means that it is not a kilogram. But still, a great size against the background of previously caught carpenters! I can’t get the camera, because under me is a bream! The hole is fed with wheat, I have a little devil – what else do bream need?

I continue to catch in this hole. I try to pick up the wiring – there are no bites, but I feel the fish. Oh, if not for the wind! I got it, honestly! As soon as I raise the fishing rod above the hole, a nod sails godlessly. With such a capricious nibble what kind of catch here? I ran forward in the hope that the bream was deeper. He returned a little back to the hole into which Stas, by his kindness, threw some bait. He returned to the bream again – there are no bites. The wind howls, a roach in a half palm does not please. German Petrovich called, who doesn’t need our plywood at all, and he stayed off the coast to look for perches. He also had a naughty perch bite; he didn’t catch a large one. By that time, we had become completely sour. The fish flew up occasionally, we snatched a couple of roach, it again froze somewhere off to the side, either yawning, or giggling over us. It only remained to wait for the evening bite. Perhaps, in the evening, larger fish will approach or the small one will stop giggling.

Over the flooded railway

But should I go to the flooded railway? This thought drilled my soul into a sieve. Three times I got up and peered at the characteristic perch sets two hundred meters from us. Well, what prevents me from running around, trying and getting back to the evening bite back? Stas finished off my natural laziness with the story that in this place two railways converge and one branch runs thirty meters from us. I decided to go to the perch sets and try to get the hell out with something that, perhaps, someone made them spin and drill a dozen holes.

Depth is two meters. It expanded a little wider, found four meters – apparently, this is the dump from the railway embankment. I continue to spin two meters – and here it is, the long-awaited bite with a free search. When one drills a place, the next hole suddenly rewards you with a clear nod clamp – there is! I’m dragging someone! Yes, not just dragging, but torturing! I just need to watch! I'm dragging a striped belly. Yes, so good! I have a fishing rod without a whip 22 centimeters, and more perch! Feel free 25-27! How much is in it? Gram 600? Yes, but no more. Rather, less. Well, let it be 500 grams. The cherished definition of "half a kilo" simply stuck to the perch, although at home he pulled 450.

The mood rose – not in vain came! I am alone on a perch with such handsome men, and I have the right time, which is not a pity to kill for the persuasion of "pot-bellied gilts." Suddenly I became scared for the thin fishing line. And if not a “gilt” breaks in, but a “sow”? Tear off my favorite damn von Neumark bait! With such thoughts, I drilled from five more holes, darted to the right, left, began to understand the direction of the railway. He returned again to the hole, where he caught a “gilt”, and in the next he took a couple of small whales, and one fish went down under the hole. Devil caught hold of the edge, some white fish calmly stood under the hole and slowly sailed away, and I thought I couldn’t get into the hole. What was it? Bream? Why not? If he is not at six meters, maybe he is spinning at two ?! Ta-a-ak, it’s becoming more and more interesting!

The hour allotted for this nickel flew unnoticed. German Petrovich joined me. We continue to look for large perches together. He doesn’t catch a voucher. And in the next hole I persuade the long-awaited "sow"! Yes, so beautiful, dark! I did not dare to drag her onto the ice, but grabbed her drooping lower jaw right in the hole. This perch seems to be bigger than the first! Put next, for sure! Well, there’s 700 in the second gram! As it turned out later, I guessed the tyutelk in the tyutelk. Subsequent persuasions did not lead to anything. I drilled a two-meter nickle on the so-called branch, but there weren’t caught at all “pigs” and not even “gilts”. But large roaches and scavengers did not fit into well-fed holes.

And although it didn’t peck like in those days that we heard about, we all liked it. Only the wind disturbed me. I even tried to rewind a rewinder and sit for about twenty minutes on a mormyshka with a bloodworm, but I was quickly tired of such fishing. On the way back, we understood the reason for the capricious bite: I noticed that some cereals had sprinkled – in general, the weather had changed. And as always, when I left fishing, I was asked questions: what kind of white fish fell off the railway and how cool it would probably be in calm!