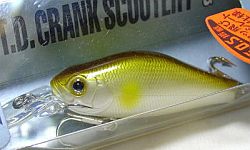 Model T.D. Crank Scouter F weight 10.3 g, body length 59 mm, effective deepening up to 2 meters. Despite the fact that there is no official division of wobblers into amateur and professional, Daiwa models are class T.D. (Team Daiwa) Many spinning players do not call professional otherwise. And the point is not even that the company itself gave them such a definition, or if you want a kind of quality mark, but that the difference in quality of performance and in the functionality of T.D models is too great. and many obsolete wobblers, especially made of wood, which can be considered a stretch to the amateur class.

Lure Daiwa T.D. The Crank Scouter F is one of the most technically sophisticated multi-function resonator cameras built into the chassis. It simultaneously performs two critical functions:
– is a voiced rattle, which is quite rare in similar models;
– an effective system for balancing and loading the wobbler, correcting its amplitude of oscillations in the vertical and horizontal planes, as well as with sharp tilts of the case. A set of balls of different diameters is located in separate compartments of the resonator chamber. The wobbler is also equipped with a long casting system. When casting, the ball goes into the tail of the bait, significantly increasing its flight range.

Many anglers believe that individual low-frequency acoustic signals caused by collisions of various balls between themselves and against the walls of the resonator chamber simulate exactly the sound (muffled chomping) that the predator makes when it swallows a small fish, i.e., a rattle at a certain speed wiring simulates a fattening flock of perch or pikeperch during its maximum activity (battle). In practice, this means that in some cases the wobbler needs to be drawn several times along the same route and next to it, the well-fed, capricious predators, who have not shown interest in it, will start scouring for food.

This model of wobbler is equally effective both when fishing on the course in large rivers, and in bodies of water with stagnant water. The wobbler has an active game at different speeds of wiring and a very high tenacity of the tees – there are practically no gatherings. When the wiring is terminated, the wobbler almost instantly floats to the surface, so it is very convenient to pass obstacles in the form of grass islands, half-flooded trees, poaching networks. Wobblers of Daiwa T.D. The vast majority of predatory fish, including asp, are equally successful in attracting Crank Scouter F, but they are especially fond of large perch and flock of pike perch weighing up to 1.5–2 kg. In conclusion, we can say that the model Daiwa T.D. Crank Scouter F, of course, refers to an expensive series, but it is certainly worth the money spent on it.

The body length of this bait is 53 mm, weight is 5 g, and effective deepening is up to 2 m. I would recommend this model to spinning men, whose relations with wobblers are not very successful. In practice, this is expressed in the fact that the fisherman, traveling to different bodies of water, for a long time can not catch anything on a wobbler. The situation is further aggravated by the fact that predatory fish, flatly refusing to take on fairly expensive models of wobblers, nevertheless, nevertheless nibbles on the luminous classics (“turntables” and “swings”). I must say that a similar situation is quite common among beginner spinning. Many spinningists, not understanding the situation, immediately make the rash conclusion that all wobblers are ineffective and should be abandoned in the future. As practice has shown, many then come to understand the “pluses” of wobblers.

I will not dwell on the issues of fishing technique and tactics, although failures are explained precisely by their absence, and we will immediately turn to the model under consideration. Miracles, of course, do not happen, but with the Daiwa Pro'S “Spike” T. N. Revo Sp-g lure even the notorious “dummies” begin to understand that there is fish in the place of fishing and, most importantly, it is quite active. At least, the number of bites or “bites” (on fishing slang) when switching to this model increases several times. Another thing is that with its game the wobbler provokes a grip on almost all the fish in the place of fishing and sometimes spinners can torture nerds weighing up to 100 g. And at the same time, at any time it can swallow the bait and a solid specimen. When fishing for pike, a soft leash up to 15 cm long is a prerequisite. The wobbler has a very attractive game, when wiring it actively splits. It has a small, but rather frequent amplitude of oscillations. As already mentioned, the wobbler provokes a grip on almost all the fish caught in the place of fishing. Indispensable for surface hunting ("fight" of zander). The color of the wobbler is selected individually, depending on the specific place, time of fishing and the characteristics of the reservoir.

The body length of the bait is 55 mm, weight 7 g, effective deepening up to 1.8 m. A universal wobbler with a large amplitude of oscillations, equipped with a powerful rattle, which really attracts fish at a considerable distance from the place of fishing. Unlike wobblers of this type, it does not lose the game in a strong current, therefore it is indispensable when fishing in rivers with a current, especially when predatory fish prey on juvenile fry. In the reservoirs of central Russia, it is an effective, well-established bait for catching pike and large perch. It can also be in demand when hunting chub and ide, especially when fishing at night.

Body length 52 mm, weight 9 g, effective deepening up to 1.5 m. Despite the fact that this wobbler model belongs to the economy class, this does not affect fishing efficiency. But there is a specificity. It is difficult to explain why the wobbler looks like a favorite only when fishing for perches weighing up to 500 g, and almost does not interest large pike and other predatory fish. But on the other hand, the wobbler actively attracts flock perch with its game and catches regularly, of course, not without the help of a spinning player.
This model in the middle zone of Russia is just a fighter "striped". A flock of perches pursues and attacks the wobbler very actively, we can say that it is reckless. To do this, a spinner in a promising place needs to draw the bait several times with the experimentally selected speed of the line winding along one path.

The length of the bait is 61 mm, weight is 3, 5 g, effective depth is up to 0.5 m. A multifunctional model that attracts predatory fish both in the classic version of the wiring and in the hover stage. Despite the minimum weight, the wobbler allows you to perform various fishing techniques and easily switch from the classic game when posting different intensities to jerking movements (twitching). The wobbler confidently holds the stream and is quite suitable for fishing in rivers with an average current. The authors believe that this model is a powerful irritant for absolutely all predators. The best option for coloring the wobbler is selected directly on the pond.