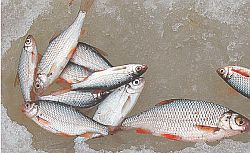 Going fishing, most of us do not particularly pay attention to the weather: the fish have their own attitude to it — they can peck both in the most wonderful and terrible inclement weather. Catching in the rain is generally a common thing. But this is if the yard is summer or at least autumn. And in the winter? However, there is nothing to be done, hunting is more than captivity. Going on the next trip to Vazuzu, we looked at the forecast: we promised minus 4-2 degrees. The most comfortable conditions are neither cold nor squishy underfoot. True, in Moscow before departure there was zero, and slush haunted us until Rzhev. And only approaching in the darkness to Vazuz, we gladly saw white snow around.

Having settled in a familiar house, they began to figure out where to go the next day. One of the advantages of Vazuza is that within walking distance in one place there are deep bream pits, and wide irrigation, where the scavenger is kept, and all kinds of bays with perch and roach. Initially, we wanted to go in for bream: local fishermen reported that from the 20th of January, at the nearest pit, bream up to 2 kilos began to come across, though only at night. But in the afternoon, kilogram copies flew in. Of course, bream is best taken in severe frost, but the bite of the scavenger could be counted on even with a weak one.

In the morning, the thermometer outside the window showed “0”. This saddened us a little, but our plans did not change. However, when we went out onto the ice, we realized that it was difficult to move around. The entire surface of the ice was covered with a thin crust of ice, under which lay a layer of wet snow with a thickness of 15 centimeters. Not even snow, but water mixed with snow. Where did it come from, we did not understand. The snow on the banks melted a little, but he obviously could not give so much water. They probably raised the level, and the water went over the ice. I didn’t really want to stomp a kilometer and a half to bream places for such a mess, and Mikhail and I decided to go to the wider watering, which is twice as close, where, as we have seen more than once, the roach often gathers in the thaw. Our third friend, Cyril, went to the “duty” point near the village. There, from the opposite shore there is a gentle dump from 4 to 10 meters. The scavenger is kept there constantly, and sometimes the bream is also pulled up.

As it often happens, if it starts to run out of luck in the morning, it’s all day. Having walked on the ice just a hundred meters, I realized that the right boot is full of water. Upon careful examination, I found a narrow cut four centimeters long. Could cut through only on the last fishing trip, but then the frost was -15 and there was no water on the ice, so the cut went unnoticed. Recently, some unfortunate fishermen have been drinking on ice and then breaking bottles. I did not want to leave the ice without even drilling holes, so I decided how much I could not pay attention to the squishy boot. At irrigation with a depth of 7-8 meters, the fish came to bait for half an hour. Everything would be fine if it weren’t for her size: a scavenger and 100 grams of bream. I could continue this entertainment, but after a couple of hours it became clear that I still had to go to change my shoes on dry. They decided that while I was walking, my partner would go to our usual place, where, as Cyril informed by telephone, although infrequently, a decent scoundrel was pecking.

During my absence, Michael prepared and fed the holes. A few fishermen around us from time to time pulled out fish, and much more interesting than the one that we caught in the morning. And our affairs were, to put it mildly, not so hot. It seemed that in the morning all the surrounding fish scattered along the well-fed holes, and there was simply no one to come under ours. True, I had one clear bite, but after cutting the fishing line 0.1 mm burst after a split second. After about an hour, I was tired of it, and, taking an ice drill and a fishing rod with a little devil, I went looking for active fish. There was a perch under the very shore, but quite “sporty,” and then, from a depth of 3 meters, complete silence began. After pouring the rest of the bait into the holes with the expectation of morning, I went to the house to glue my boots and get ready for tomorrow's fishing. The result of the first day was disappointing: a lot of bites, dozens of caught scammers and perches, and not a single worthy tail.

We really hoped that it would freeze at night, but this did not happen: the thermometer still showed "0". I didn’t want to go through the porridge, so everyone took yesterday’s holes at a depth of about 10 meters. This time also those holes where yesterday pecked were silent. Soon it began to rain and it became very sad. The fishermen who sat nearby got up from the crates and wandered from hole to hole. The general opinion was as follows: even though the day has just begun, you can get out. Amid the general gloom, only our Mikhail tried to find active fish. First, he walked through the drilled holes with the little devil, then he took up the mormyshka. There were clearly few chances, but he apparently liked the process itself. Watching the movements of Mikhail, I did not immediately notice that he was increasingly pulling out a mormyshka and immediately sending it back. Found!

It turned out that roach is standing at a depth of 8 meters, and it’s very active. Apparently, she pulled herself up in the morning or just started to feed, since yesterday there was not a single bite at this depth. Assessing the situation, all the fishermen who were nearby took up the ice drills. Fish took only at a depth of 8 meters, closer to the shore at a depth of 7 meters, bites became rare, and at 9 meters they were not at all. Soon, all the surrounding fishermen sat in a chain repeating the topography of the bottom. Having settled down a few meters behind Mikhail, I took out a fishing rod with a small mormyshka and 0.09 mm fishing line. At first he planted one large bloodworm, but quickly reached three or four. The size of the nozzle did not bother the fish, and even small roaches recklessly grabbed a bloodworm brush, more suitable for bream. It was strange, but the fish from 50 to 200 took it in turn. It was also strange that all the bites went only from the bottom: as soon as the nozzle was at least 10 cm from the bottom, the bites stopped.

Fishing was fun, but not very convenient: the wind blew and a thin fishing line constantly clung to the ice. In addition, a small mormyshka, even on a thin fishing line, sank too slowly to the bottom. I tried to catch on bream tackle. Mormyshka drowned in 5 mm, of course, much faster, the number of bites did not decrease, but it became more difficult to hook. True, it was not necessary to take out the tackle with a single bite, since the roach could not remove all the bloodworms at a time. But one cut roach for five bites is not the best result. I put a leash with a small hook on the fishing line – there were much more effective bites. Interestingly, the roach first grabbed a bloodworm on a hook, and only when it ended did it switch to mormyshka. At the same time, she took it much better on a moving nozzle. It was not a game in the full sense of the word. Having lowered the equipment to the bottom, I quietly pulled up the fishing line until I pulled the mormyshka from the bottom, and then the hook began to move. At this moment there was a sharp bite.

A thin leash was often overwhelmed by the hook of the mormyshka. At some point, when I was tired of unraveling, I cut off the snap, clamped a 1.5 gram pellet at the end of the fishing line, and tied the leash with a hook above. The tackle turned out to be very effective: there was nothing to get confused, and the bite was clearly transmitted to a long metal nod, originally intended for fishing for the devil. Fascinated by fishing, I did not even notice that the rain intensified. I felt this only when water began to drain from the hood onto my face. Looking around, I saw that the people around had noticeably increased. Many fishermen, exhausted by lack of bite, moved towards the village, but when they reached our chain, actively waving hands, they unpacked again.