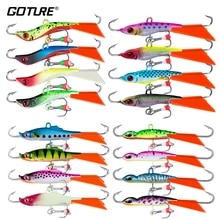 Fishing with balance weights is gaining more and more popularity every year, perhaps even ahead of fishing with classic winter lures. This is facilitated by both a wide variety of balancers on store shelves and their catchiness. Balancers do not require any special playing technique, and it is easier to make a working bait than a good spoon. We can say that a truly catchy spoon is a piece product that is not so easy to find, while the balancers are more “democratic” in this regard.

The A-elita brand is known primarily for inexpensive, but quite working wobblers. However, there are also balancers in the assortment of the company. For perch fishing, models with a nominal length of up to 60 millimeters are most suitable. It should be noted that the full length of the balance bar together with the hooks is given in the factory marking of these lures, while the body length of the lure is shorter. For this review, lures with nominal lengths of 50 and 60 mm were tested. It would be very interesting to evaluate the 30 mm model, but, unfortunately, there was no one on sale: either they are disassembled very quickly, or they are produced in small batches. Although it would be useful to test such a mini-balancer, especially in the January suburbs.

The body length of the “passport” size 50 mm was found to be 33 mm, and the “sixtieth” size – 37 mm. Together with the tail – 41 and 48 mm, respectively. Weight 7 and 10 grams. The size of the hooks is quite harmonious, they are made of thin wire: 0.67 mm for the “fiftieth” model and 0.80 mm for the “sixtieth” model. Well in harmony with the size of the bait and hanging tee. On the smaller model there is a hook number 8 according to international numbering, on the larger one – number 6. The forend of the tees is covered with bright orange lacquer, which, apparently, according to the designers’ intention, should create an additional attractive effect. True, this coating is fragile, it is easily damaged and flies off the hook. However, hanging tees are easy to replace if necessary.

A-elita Submarine lures can be called “average fed”. Among the balancers, you can find both wider and more runnable, here the average proportions are observed. At the same time, the lures are quite heavy – for example, Rapala or Kuusamo of the same size are noticeably lighter. The body of the balancer is flat at the bottom, which, to some extent, affects the play of these lures.
The eyes, gill covers and the lateral line with scales are well developed, although the latter may be “disguised” by the paintwork. Moreover, there are specimens in which one half of the body has embossed scales, and the other is smooth due to an excess layer of varnish.

The lures have 8 color options – both naturalistic and fantasy. A little surprising is the lack of the usual color “perch” in the line. There is only Fire Tiger and the variant shown in the photo. But the popular Red Head is even presented in two modifications – regular and with a fluorescent effect. The coating itself is durable, adheres well to the bait. The lower part of the balancers is painted bright orange. The tail is made of translucent red plastic, which additionally increases the visible size of the bait, and according to a widespread theory, it also attracts fish. There are no complaints about the quality of workmanship and gluing of the tail – it holds quite reliably.

The balancer hangs on the line almost horizontally – the angle of inclination is only 4 degrees. The game turns out to be quite wide. Due to the flattened abdomen, the shape and size of the tail, the balance bar extends far from the hole. True, the reversal occurs not at the extreme point of the trajectory, but already on the way back, but this can hardly be considered a serious drawback – this behavior is also characteristic of more “eminent” baits.

This is another line of budget-class balancers produced by a company better known for its copies of Japanese and European wobblers. River2Sea’s range of lures is available in different sizes, but the first two in the range – 45 and 50 mm in length – are suitable for perch. Of course, for difficult conditions and low fish activity, we would like to see smaller models, but so far there are no such models, and we will have to use what we have. Pliant balancers have the medium proportions found in many lures of this type. At the same time, they look more “plump” than, say, Damiki or Kuusamo balancers, most of all resembling Rapala lures in this respect. Like the A-elita Submarine, the Pliant, with its modest dimensions, has a rather serious weight, which makes it possible to fish with them at great depths.

The abdomen of the balancer is flattened, slightly convex, which creates a gliding effect when playing the bait. The eyes and gill covers, as well as the relief of the scales, are well developed. In this respect, the Pliant clearly outperforms the Submarine. However, their paintwork is rather fragile and easily damaged by impacts on hard objects. And you can’t call it too neat: the fastening loop, the loop for attaching the hanging tee, and partly the front hook are covered with paint. Of course, this is unlikely to affect the working properties, but the overall impression is somewhat spoiled. Basically, the assortment contains realistic color models, of the fantasy ones, only Fire Tiger and Red Head can be called. But there are several options for the beloved fishermen “striped”, which is undoubtedly the advantage of the series.

There are no special bright color elements that make the bait more noticeable, except for the tail made of red translucent plastic. True, there are serious complaints about the quality of the tail itself. Firstly, there are plastic defects, chips, and uneven edges visible to the naked eye. Secondly, the tail is not glued neatly: there may be a gap between the bait and the tail, which is especially noticeable on larger models. And this is not only the appearance, but also the working qualities and strength of the bait.

As in the previous case, the nominal length is given for the entire bait together with hooks, although this is not done accurately. The real length of baits with hooks is 49 and 57 mm, the body length with a tail is 41 and 48 mm, the length of the body itself is 32 and 40 mm. Weight 8 and 12 grams. A serious disadvantage of baits is hooks made of very thick wire, its diameter is more than a millimeter. If such hooks would look normal on pike balancers, then they do not harmonize at all with medium-sized perch balancers. This disproportion is especially striking on the smaller balancer. The same can be said for the suspended tee. His wire, by the way, is thinner than on the soldered hooks – “only” 0.71 and 0.8 mm, and on the smaller balance bar the hook is made of thicker wire. Tees size – No. 8 and No. 6. There are no elements attracting fish on the tees, but it is rather difficult to change them due to the design of the loop. More precisely, you can remove the hook, but it is much more difficult to hang a new one, it is easier to use a small winding ring. The sharpness of the hooks is far from ideal – it is better to sharpen them immediately after purchase.

The baits hang on the fishing line, very much lifting the bow, and this is their biggest disadvantage. The angle of attack is 24 degrees. Because of this, when jerking, they do not go to the side, but up. The horizontal component in the game is much less pronounced, and the behavior of the bait cannot be called predictable. The balancer can turn normally at the extreme point, or it may not turn at all, and I did not find any dependence of such behavior on the technique of the game. To summarize, if you have a desire to experiment with lures or refine them, Pliant is fine for this. But just to fish and even more so to learn with their help fishing on a balancer is hardly worth it. Saving in this case does not justify itself at all.

For many anglers it came as a surprise that the Korean company Damiki produces not only quite good wobblers of the “popular” price segment, but also balancers, moreover, several models. We will consider the Z-Glider Fat lures in one of the following reviews along with other “fatties”, but today we will focus on a more protracted model. In principle, the entire lineup of this company is suitable for perch, but we will take a closer look at only the two smallest models – weighing 5 and 7 grams. By the way, there is no information on the length of the bait on the package, so when buying, you will have to focus only on weight.

Compared to the other lures reviewed, the Z-Glider is noticeably “slender”. The lures are noticeably flattened not only from the bottom, but also from the sides, seriously differing in this from the Submarine and Pliant. The abdomen is concave, which increases the gliding effect of the bait and stabilizes its play. The detailing of individual body elements is not as clearly expressed as in other lures, but the eyes stand out very strongly, and they stand out not only in the literal sense (noticeably protruding from the body), but also in their contrasting color: in lures with a dark head they are yellow, and the lighter ones are red. This immediately catches the eye, and it is quite possible that not only the fisherman, but also the fish. There are 12 coloring options in the model range, the number of realistic and fantasy is about the same. The coating is durable and of high quality, there is no need to fear for its durability. Noteworthy is a rather large plastic tail, which can be transparent, red or orange. The tail is glued securely.

The nominal length of the considered lures according to the catalog is 3.0 and 3.5 cm. In contrast to the previous models, the catalog contains the body length of the balancer. Full length with hooks, both models 53 mm. The size coincidence is due to the fact that the tail hook of the 5-gram balancer is more pronounced. The length of the body with a tail is 40 and 45 mm, the length of the body itself is 31 and 36 mm. The weight of the lures is as stated. The hooks are quite good, made of wire with a diameter of 0.78-0.80 mm. True, I had a desire to undermine them immediately. The size of the tees is in harmony with the size of the bait. Both models have tees number 10 according to international numbering made of wire with a diameter of 0.58 mm. The tees have a plastic bead covered in brightly colored paint. I advise you to pay special attention to this element when buying, since the quality here is not always at its best. The droplet may turn out to be less “appetizing” than the one on display. And replacing the hook will not be easy, since the fastening eyelet is not very convenient.

On the line, these balancers hang at an angle of 10 degrees. Z-Glider’s gameplay is quite broad and stable. It should also be noted that the bait almost instantly turns at the extreme point of the trajectory, especially when playing actively with sharp rises. When fishing with these balancers, you can make quite long pauses: a bright drop on the hook will continue to attract fish even after the bait itself stops. This is often useful when fish are not very active, which is especially important now, in the wilderness.