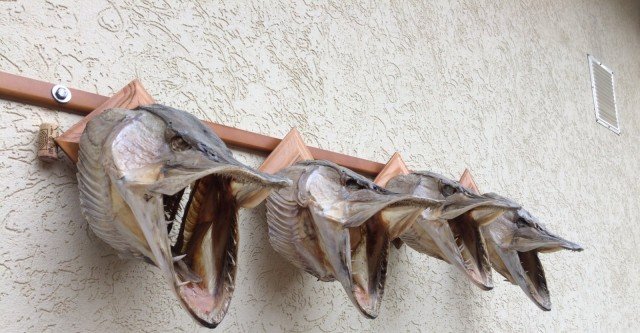 I read on the site how Colleague Anton Yurievich was working on this winter zergelina for crocodiles, looked

watched his video on YouTube. I decided that much could be done for the winter in my own way.

I bought 10 pieces of Terminator necklaces at an inexpensive price (200 rubles each). According to the video (available on the network), it bribed that the manufacturers made an excellent bracket for attaching the coil (as much as plastic from a Kalashnikov assault rifle !!!) and came up with the concept of “anti-beard”.

When I opened the bags with zergirls at home, I could only say the words from my favorite book “12 Chairs” when Bender took the chair orders from the archivist: “Never before has Bartholomew Korobeinikov (ie me) been so meanly deceived. He could fool anyone, but here he was cheated with such brilliant simplicity that he stood for a long time, pounding his legs on the thick legs of the dining table … "

shown in the photo:

No. 1 – the bracket is not made of automatic plastic, but of soft metal stamping. A boy of 5 years old will bend him with his hands.

No. 2 – a hole with a cambric for skipping the fishing line for the “anti-beard”, the cambric will burn under load on the 2nd, maximum 3rd pike snap and the fishing line will be cut off at the edge of the hole in the metal.

No. 4 – the handle on the reel on the same side as the iron lamb, when winding "on itself" in the cold, either you will tear your fingers away, or the bracket will bend, or the winding will be loose.

Other shortcomings are smaller, let's call them “mass production costs”: backlash of the coil, strong slacking of the rack in the plastic base circle, you can generally forget about the “anti-beard” in this design.

I wanted to throw away the inherited “miracle”, but decided to make candy out of all this. Only three things were sensible: the base circle, the reel and the flag whip.

Stage 1. Production of a rack.

I am convinced that the 14 mm rack-rack, although it is made of birch, will not stand the normal pike, especially with all kinds of self-tapping screws in it. He asked a friend and he made me of ash (tree-stone) racks half a meter in length with a section of 20x20mm. Seated at the base of 14×14 mm customized on an emery and a file. Comes in with a little effort, made specifically without any play.

Paint racks did not. He picked up a shrink sleeve and set it with a gas burner where he considered it necessary.

This is required to attach the flag.

I decided to make the rack universal. For winter, when the coil is high above (so as not to sweep and not to stick in any branches for searches after the blizzard) and for spring,

when the coil is from below (so that a strong wind does not overturn a structure standing on bare ice). Another “trifle”: from the ends of the rack to the axis of attachment of the bracket from 100 to 170 mm. When the zergirl’s tip over or if the base circle is damaged, the pike will not drag the structure into the hole (I work with a 150 mm drill), in any case, the stand will lie across the hole.

For the concept of “anti-beard” I took the usual plastic plugs, made 2 holes. 3 mm in diameter opposite each other and fixed the cork on the rack with a self-tapping screw, because there is no cork load at this point.

You can’t screw anything into the ash without preliminary drilling with a thinner drill, so the stand is not weakened.

The main thing in any zergel is universality in fixing live bait so that he himself does not make a false catch and does not run away to hide to the bottom in the grass. At the same time, unwinding should immediately go to the pike. If the fixation is strengthened excessively – again badly, without unwinding the pike will immediately spit live bait. The basics, of course, but this is the idea of ​​any really working zerglitsa.

That is why I made a place on the rack for the fishing line retainer using chopik. Chopped pieces from a rubber hose,

having previously drilled holes for another self-tapping screw in them. I won’t agitate for this design, someone likes to fix the coil just with a flag, but if the perch is live bait under 300 gr, then no flag will hold it, 9 will be constantly false positives. I make a lot of choppers on purpose, even paint them sometimes.

You can simply take twigs or break a match in half and clamp the line inside the rubber retainer with the necessary effort.

Stage 2. Production of the transverse bracket, tuning the coil.

The bracket was specially made of 4 different materials: a bar 20×20 mm from ash, a durable plastic bar 15×15 mm (used from a mini-guillotine), a wooden corner 30×30 mm from ash, a carbolite corner 25×25 mm from the burned out device.

Therefore, I had to come up with different options for fixing the bracket in the working (almost horizontal position). For corner brackets, you need to make the right cuts on the shelves and adjust them in place, nothing complicated. For brackets from a bar I took an ordinary furniture corner.

Not very happy that it is metal, but the construction is very solid.

The bracket is fixed on the rack with a 4mm screw (do not forget the washers) and is completely locked with a second nut – this is a very important point.

The nut closest to the strut is tightened to the desired force (so that the bracket goes smoothly and does not slurp), then this nut is held by side cutters and is locked with decent effort by the second nut. The tip of the screw so that it does not stick out is cut off in advance or a screw of the desired length is selected.

The coil is attached to the bracket with a 6 mm screw, which is also the axis of the coil.

In the bracket, the hole is drilled 6.5-7.0 mm. Be sure to lay the contact points of all planes with washers, preferably bronze (I did not find and took the usual galvanization). I do not recommend using wing nuts (they untwist, burn fingers in frost, do not fix the force for a smooth run of the coil, stick out and hook on everything). Ideally – a self-locking nut. Choose the smoothness you need and fix the entire assembly that way. Again, ideally, it is necessary that the tip of the screw-axis does not stick out on the nut (saw off too much in advance).

Do not forget that the handle of the coil should be on the side of the screw-axis head, this is clearly visible in the photo.

Let these details not seem redundant – without a good signaling device, the zherlitsa turns into "grandfather", i.e. not visual. As a colleague advised,

the existing flag is mostly cut parallel to the whip, the remainder is wound on the whip and wrapped with a band-aid. New flags are made of dense cotton fabric and a light-emitting strip is still sewn on top (there is in any women's fabric store).

The size of the flag was also chosen on the advice of Colleagues, so that in a twisted state it entered the recess of the coil with some effort.

The tip of the whip should be slightly bent so that the flag does not shoot falsely. The body of the whip, in addition to the bottom 15 cm, was covered with a multi-colored heat-shrink tube, I just wanted to and it was left over. The check box on the rack is fixed in the working position under the shrink sleeve on the rack.

A leash of 20-25 cm at one end is a swivel, at the other – a carabiner, a weight of olive 10-15 gr. (I got it with cambric, this is not necessary), or you can take 2 ordinary lead fillings, no beads are needed – I will never break the lead knots on such a fishing line, double or tee to my taste, I have almost three tees and through gills – the live bait quickly dies.

For the transport position in order not to remove the tees, it is possible to use a heat-insulating tube, very convenient. 28

The authors of the zergelika in the first correct equipment with a plastic bracket, the “anti-beard” could work only when winding a long fishing line (15-20 meters). This is a lot.

I will not describe, here is a video from a Colleague https://www.youtube.com/watch?v=3sDcoFfvCJM

But even so, in the last 3-5 meters there could well have been an overlap of fishing line and the reel got up. The second point – you need a perfectly correct winding (on ice it is almost 100% impossible to do). And thirdly, the fishing line should go to the reel strictly in the center of the reel groove. With the cord, the “anti-beard” does not work from the very beginning. The best option against the beard is a good tuning of the coil for a smooth ride (see Step 3), then with no jerk of the pike you can make the coil spin without tension, so there will be no beard. And the second turn of fishing line to the reel is not needed. I nevertheless attached plastic plugs for the “anti-beard” concept to the rack, I will try different options. Even without a second winding of the fishing line around the reel, these corks will serve as a kind of calming agent for the fishing line.

Thus, we avoid the slightest roughness and knots, which can interfere with the smooth descent of fishing line from the reel. Wrap the fishing line (6-7 meters) with a little effort by rotating the reel on itself so that the line during winding is on top in the recess of the reel. After winding, a tackle is mounted on the second end of the line: a weight, a swivel, a leash, etc.

Nothing prevents the house from adjusting the girly at home in a relaxed atmosphere: lock the axis so that the coil moves smoothly with a little interference, practice installing the choppers in the latch, try the anti-beard advertising method and, perhaps, find your own twist.

The author spent a car on these 10 zergirls of time, but he is sure that everything will work on ice.

Do not believe the one who says that he drove into the store, bought an already equipped ventilator, hooked live bait – and let's carry pike! Wise were our ancestors: “Without labor, you can’t take a fish out of a pond!”