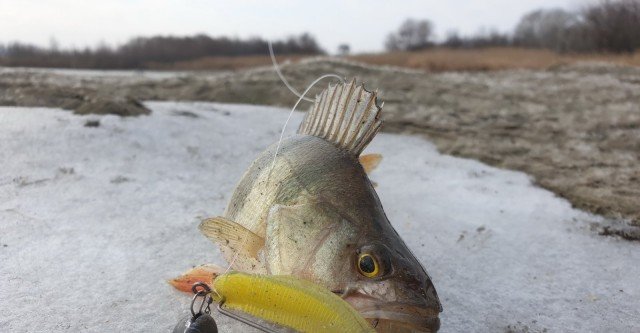 Due to the abnormally warm winter, there is no point in waiting for everyone to love their winter fishing from the ice, well, maybe in the distant future, but now even if the temperature is a little minus, you can try to open the winter jig season. A strong east wind spoils the fishing a little more, which rapidly blows water out of the river and water bodies connected with it. On the one hand, this is bad, the fish will go to a greater extent to a depth to look for holes, and on the other, it’s good because on the lake the long shores that are accessible at the usual water level only from the boat will open. And it usually pecks yesterday, tomorrow and on the other side!

Since the level has fallen sharply and I’ll catch from the shore, I took light tackle up to 10 grams with me. This is Major Craft K.G.Lights KGL-S742Deep spinning, I think the working weights will be 6-8 grams, and I will already determine the lures in the process. From those places from which I usually decided not to start fishing and went straight to the far shore, from the boat in those places I managed to perfectly catch the striped and pike.

At the first point, I equip a load of 8 grams and a twister of natural golden color in the hope of a pike and begin fishing. At the ejection, the depth was 7-8 meters and the edges were sharp towards the shore, just a good working depth for pike and large perch. Perch responded quickly after eating bait on the next wiring. He was not alone there and large enough, sometimes he swallowed 90 mm bait very well.

Looking at the open shore, you can easily identify the most interesting places for fishing, the bends clearly show where the nooks and the possible accumulation of a predator. Each such depression in the coast was caught and the perch responded, the change of bait and color to the bright side gave an increase in bites of the striped, but not a single pike.

Perch was caught steadily from every point and several pieces, a decent size of up to 350 grams approximately and resisted smartly, ate appetite Aka 90 and Haro 75 baits. I didn’t experiment with baits, I didn’t want to change them in the cold, and so did my winter gloves I forgot at home and had to catch in the usual building which were in the car just in case, my hands froze very much.

Having been satisfied and freezing, I went rather to warm up in the car, spent the winter perch, he has an active mood, it pleases, in general, fishing and the opening of the winter jig went great.