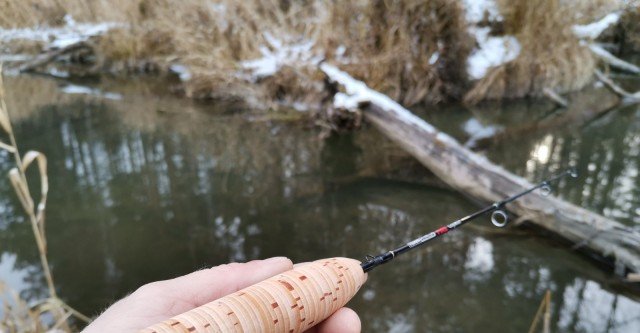 “I have my favorite winter saloon Team Salmo Pike and one dear friend (hereinafter referred to as the“ Brother ”). And so, one of them really liked the other (my brother is my lure) …

In the photo I'm with my fishing rod.

Accordingly, quarrels in the team, requests, such as “let me go fishing,” hardly get to a fight … So`c … I’ll hate a little …))) In general, I decided to surprise my friend with the First Year of 2019 – to give the same fishing rod. I ordered it. It has arrived. Printed out …

It should be noted that in the “out of the box” state this fishing rod has an awkward plastic handle with a reel seat. It (the handle) is not only “cold”, but also slippery, plus it adds gear in general to completely unnecessary weight. And the fishing rod form itself is super-successful just for catching pikes on balancers in our understanding of this process (we compared head-on-head with Salmon and Perch and Zander models).

For my fishing rod, after the first fishing, I made a handle out of cork wood blocks, which Brother liked somehow. By the way, he presented the cork (the last one !!!) to me …

Here I am sitting with a fishing rod in my hands and I think that it’s worthless to give stock equipment. Again, the best present is made by #IRECT. So the story began … "

We did not have to think long about the choice of material for the manufacture. They may have moved in the depths of “Bloody Roots” (like if they recognized the song!))) Of their ancestors, who probably weaved bast bast shoes, baskets, tueski.

Or maybe I remembered about a knife that was once found in childhood, and then a knife lost in youth, the handle of which was drawn from birch bark. I still could not believe that it was birch bark …

Fortunately, I live in a village in a house with stove heating and, chopping wood in the summer, I made a good supply of birch bark for the winter. The process of manufacturing the handle in my head I immediately presented. In addition, he remembered the video of the blogger Advokat Egorov, where he makes a handle for his knife from birch bark. But my Path had to be thorny and complicated …

I started in a classic – I broke a fishing rod. More precisely, a stupid plastic reel seat. Useful angle grinder with a cutting disc and pliers.

The graphite whip itself turned out, like in my fishing rod, glued into a tube made of a material similar to fiberglass. I did not begin to clean it. It was according to her (tube) diameter that I picked up a piece of fiberglass fishing rod of the length necessary for the handle. Cross play turned out to be barely noticeable.

Then he started making birch bark “disks”. The process is simple and even enjoyable. You need a core drill of the required diameter (I worked with a drill with an internal diameter of 30 mm) and a drill or screwdriver with the function of a drill. It is important to make cuts smoothly, slowly, so the discs are neat.

Note: it is better to choose birch bark with a drill thicker and in places where it is more even. This will save further unnecessary efforts to align and reduce the number of disks in the finished package.

Well, in the next step I turned on my favorite music (at that time Theodor Bastard's 2012 Oikoumene album) and sat comfortably, preparing myself for a long and painstaking work on the primary processing of each disc … The thing is, loose upper layers need to be removed, so that the finished product has high strength characteristics. In addition, I removed with a knife irregularities from the “back side” and lined it with sandpaper a little.

“Soon the fairy tale affects, but not soon the thing is done …”

Now it was necessary to “fit” the inner hole of the disks under the same tube from the fishing rod, which I chose as the base of the handle. For this, I chose a drill with a diameter of 10 mm. A few minutes of work with a screwdriver "on the knee" – and you're done!

Trying on – everything is fine! You can remove the "chamfer" sandpaper.

Note: I made the discs with a margin consciously. During the final assembly, some of them may not fit into the package unevenly and will want to be replaced. Well, if the spare is at hand.

For convenience, I went to my desktop in the workshop. Prepared tools and material. At the same time I decided to glue the tails on the new balancers before the impending season, so do not be surprised that they are in the frame)

The assembly process is simple, the main thing is not to overdo it with glue so that your hands do not stick to everything. And, as practice has shown, the "busting" of glue in some places did not affect the final result.

Note: Egorov’s lawyer provides a way to glue a bag without glue – by heating the collected bag in hot water. I tried – it didn’t work out for me. The package was stratified into "barrels" of several layers. Thus, the first package of disks went into the bin …

And so the package was completely assembled. In addition, I pulled it onto the mounting thread, putting washers of metal, metal trimming tubes and birch bark discs so as not to push the extreme discs of the bag. The billet was sent to dry over the stove for 4 hours.

Four hours have passed. The glue is completely dry. The long process of giving the workpiece the shape of a handle has begun … I don’t have a lathe yet, I had to "get out" using a angle grinder with a peeling disc.

Worked neatly, observing safety rules. The process took about half an hour. I had to slightly reduce the diameter of the handle.

It only remained to do the processing of large and small sandpaper.

I “planted” the handle on an epoxy. The process is quick, no details needed. Clay did not spare. There are no voids between the parts.

The void on the back of the handle was filled with epoxy mixed with birch bark dust.

After a bit I cleaned the crafts with fine sandpaper.

The handle came out ergonomic, warm and light (at the level of the cork).

He did not begin to impregnate and further process. Let the handle serve its age, and then I come up with something new)

Like everything!) I think it worked out. Day of work "from and to." The technology has been mastered, winter is ahead … Try it out on spinning rods? … But it will be a completely different story.

I would like to end with the words of the hero of my favorite film – Hatori Hanzo (well, at least with his intonations):

“I finished the fishing rod. I did this because my philosophy makes me sympathize with your Goal … Even if the Buddha himself appears on your Path, he will be caught! ”

The wife saw the manufacturing process. Today I put a kitchen cook with a broken handle, as if hinting …

Yeti Angler. Not every angler will understand the meaning of such fishing. Right? Loach 2019.
Where did the pike perch go?
Will we take care? |
Tags: brother, fishing, Gift, handle, rod, Warm