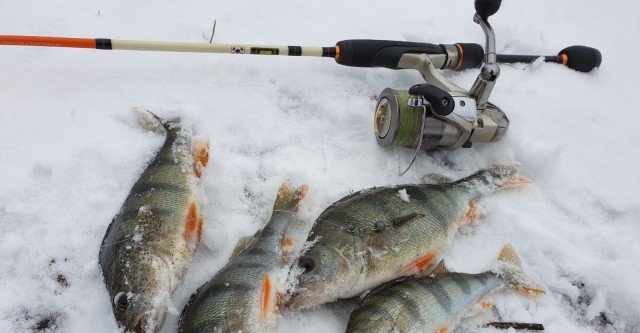 To change the weather | Fishingsib

I look at the weather forecast and literally tomorrow it will crush hard frost to -10, can winter come to us? While there is an opportunity and the pond has not frozen, I'm going fishing. The goal was to catch perch on microjig in the coastal zone, so Aiko Tirrel 210UL-S took the stick with him with a test of up to 5 grams. It is excellent on the cord 0.4 # shows the touch of the bottom of 2 grams, 3 grams is already perfect in almost any environment.

In theory, a predator should be active before changing weather and frosts, but still equipped a lightweight cheburashka with a small Hiroko 38 bait to be with a catch. There are a lot of places, fishermen practically no one, not everyone likes to catch in zero temperatures when the cord freezes and it is necessary to clean it often. It was just like that because I absent-mindedly forgot the well-known baby oil at home.

At the beginning of the perch, I searched for a long time, examined different parts of the relief and the ledges of the coastline, in such places in the nooks and bends it usually holds. And the perch showed itself with confident bites, small but hungry and showing activity.

Perch, as expected due to the high water level, held more than the upper part of the edge aground. At the depth of the edge, there was standard jigging, as soon as the bait went up along the edge and ran aground, it started mormyshing in the water column and most often it was at these moments that it attacked.

What was most interesting was not a single spotted robber, although she is here, but for the better, the stocks of baits will not be greatly reduced. But the perch also bit off the working tail of a small bait in those moments when I did too quick a cut, not allowing the bait to be chewed properly, but still it would not completely lose all the equipment.

The predator pleased with its bites, lively resistance to fighting and, as always, was rewarded with freedom for it. The bait worked well, the perch liked the shape and dark color, the weight of the load and the combination of postings all ensured good fishing.

Time passed rapidly and the sun began to slide to the horizon, there was a bite and it will be another hour for sure, but there was no time after all yet to go 3 km off-road.