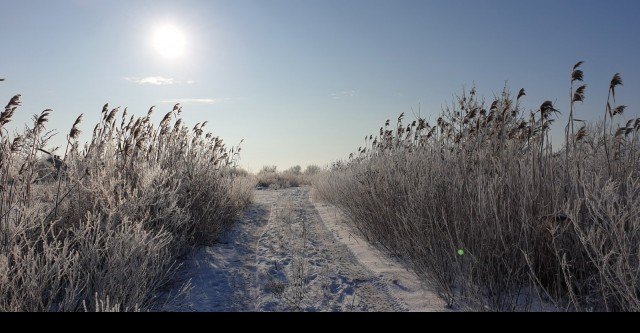 How long have we been waiting for frosts so that the ponds froze and are covered with thick enough ice so that you can enjoy fishing from the ice. Take pleasure in balancers and spinners of perch and pike. Frosts came to us, sharp and quite strong, that in just 4 days almost all closed reservoirs, lakes, ponds, canals were covered with ice. A box, fishing rods, a drill and a lot of lures, novelties that need to be caught have long been waiting for their chance, having collected all this, I’m going to the pond. Morning frosty beauty pleases the eye, everything is very beautiful and magnificent on this frosty morning.

Having made my way through the thicket of reeds, I get on ice untouched by anyone, which means the fish will not be impaled and possibly less shy. Depths to one and a half meters and it is necessary to behave extremely quietly.

He drilled a heel of holes, the ice is only 6 cm long and bursts. Now you need to choose where to start, because there are many lures that catch and new items that need to be caught. Since I aimed at the pike, I decided to first equip the spinner and try it with a bright provocative color.

The bait spoon falls into the hole and here they are the long-awaited moments of posting in anticipation of that very blow … Only the fish apparently didn’t know what they were trying to catch here and the first ten holes did not show themselves. Further on the next hole there is a bite and perch, not a pike, on ice, then again and again, 4 perch from the hole is good.

Then again empty holes, as it is strange that there was not one pike. I drilled a lot, if there were no bites from the approach, then it was possible not to waste time and move on. And if the perch was caught, then only 2-4 things from the hole no more, as if he were swimming by and just fell under his nose. I tried to look into the hole, but did not see anyone.

Having reached the end where there is a small backwater, I caught a little perch and finally a pike, or rather a pike cub eating a bright spinner.

The bait Pelican 5 # worked well on the baits, the only thing was to choose the right derg so that there were no overlaps, since the depth in the place was not great. The rod was held almost vertically, the jerks were smoother and then the spinner played as it should. Fishing was a success and pleased went home, soon again on the ice.

Universal swimbaits. Differences and methods of animation
Catching predator in koryazhnik
Yeti Angler. Not every angler will understand the meaning of such fishing. Right? Loach 2019.
Tags: fishingsib, ice, second