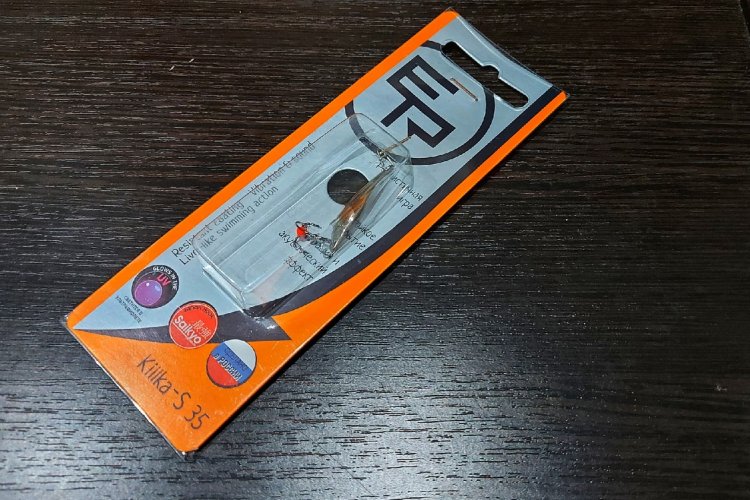 Sprat or lure top 3 in my box.

It’s not a secret at all that when fishing for perch, spinners, I devote a lot of time, and as a result, material and understanding is collected on their catchability. So, each bait over time either fixes its place in the box or leaves it due to instability. Earlier, I already talked about using Ecopro Shprot-s lures on my fishing trips, and as promised, I will definitely tell you about the “little sister” Killka-s, who also booked herself an honorable place in the box and, moreover, is in the top 3 among the verticals of the season 2020-2021 …

To begin with, this is the smallest lure I have ever used. With a length of 30 millimeters, the weight of the spinner is 3 grams, which at first glance seems to be incomparable in relation to the length. This is due to the geometry, the shape is slightly wider than the classic spinners, but, despite this, I did not notice any special differences in the game. Saikyo’s tee with a red dot for attack – no changes here, everything is the same as for Shprot-s.

The first acquaintance with the spoon took place spontaneously, or to be more precise, I just forgot that I have it, and got it only at the end of the fishing trip. Two strokes and the first table bass is a good start, right ?! I also thought, followed by a few more pinky robbers, and then finished fishing with the aim of spending more time on her next trips.

Often in the echo sounder screen it was possible to observe how the perch was interested in the spoon bait even when it was lowered into the hole and stopped in the water column. The main thing here is not to alert the active fish, but to start the game with low tosses, not letting the fish go below the level. At such moments, I usually don’t pause for more than 4 seconds, this is enough for an attack. Behind the Killka-s spoon, the perch rose well from the bottom, when after a series with the same amplitude I raised the spoon higher. It is noticed that in the depths the perch often loses its vigilance, since it has already spent energy that needs to be restored and competitors see what is happening and can take away the prey.

Often, a striped robber weighing 100 grams or more would swallow the spoon entirely – although only 30 millimeters long, what else to expect ?! At first, this imposed some inconvenience in fishing, but then I got used to using my finger to push the spoon, and even the need for a special tool disappeared. Over the course of several fishing trips, Killka-s has retained its original appearance, has not faded or covered with a coating, although some anglers believe that the gloss of the bait has a negative effect on the fish’s appetite, and even scares them off. A refutation of this, perhaps, will be caught, in an amount of at least a hundred, fish.

In my opinion, this lure can also be considered by athletes who, in most cases, focus on competitions in high-speed fishing for medium-sized perch, and even Ecopro Killka-s just falls into the minimum size allowed. For amateurs, taking into account its cost and good catchability indicators , I also advise, as it always shows stable results. Personally, in my box it is in the top 3 of the best spinners in perch fishing, whether it will hold its positions with the release of new models will show time, but for now everyone NCHNKh with respect Sergey Egoist!