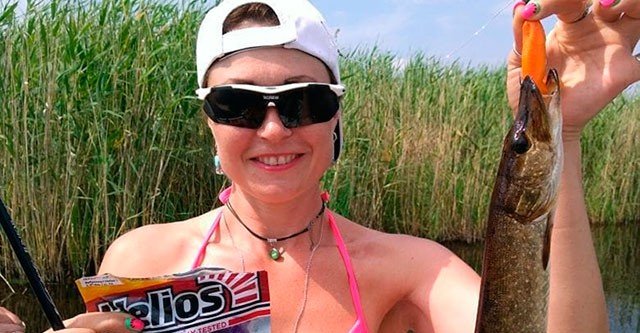 Silicone for every taste and color. Experienced fisherman reviews about Helios lures

Edible tires for the professional


HELIOS Baits – FREE! Testing for everyone

GK "TONAR" produces 40 models of silicone baits Helios, each of which has about ten color options. We asked experienced fishermen to express their opinion about these baits.

Edible tires for the professional

Vladimir Polosukhin, MS in fishing sport, the champion of the Altai Territory in spinning from the shore.

Quote: "Every region has its own fashion for baits. In the Altai region, for example, a white twister is popular. Many people think that it’s only for him. It’s actually a stereotype that has nothing to do with reality.

More or less experienced fishermen understand that even on one river in different places a different bait can work. Therefore, it must be carefully selected under certain fishing conditions. I had a case when on the river a small purple vibrostail Helios Liny Catcher went well. A week later, on the same river, just a little elsewhere, he was no longer working. But this time a larger bait proved effective. And the fish was caught the same size as on the Liny Catcher.

So you need to have with you a whole set of lures of different sizes, shapes and colors. Helios, in the first place, are good because they provide ample opportunities for selection: more than 400 varieties of baits, and among them there are those that have no analogues in Russia.

For example, Helios Jap is a versatile lure with fins that can be used as offset hook protection. Good catches pike and perch. This is almost an exact replica of the Yum Samurai Shad bait, which was very popular at one time, but was removed from production. If you miss the "samurai", then Helios Jap is the only alternative, at least in Russia.

You can buy silicone bait HELIOS in the online store "Trophy.

Helios Nelma is also unique in the domestic market and also, by the way, an excellent bait. It is most similar to a real fish – you can see eyes, gills, scales. Good for hunting predators. Those who go fishing for prey should add this model to their kit.

You will not find analogues for Helios Din. I really liked it on the lakes. Somehow in the competitions at Utkul we caught the bait, which always worked in these places, but all of a sudden, by the middle of the second round, everyone stopped pecking. I had Din with me. And the colors are extremely atypical for this reservoir – violet with a light green tail. Already at the end of the tour I decided to try it and immediately began to catch pike. It was even a shame that I had not tried this bait before.

There is also Helios Slash, Helios Kasandra, Helios Long Hybrid – there are no similar baits of other brands on the domestic market.

In general, Helios is enough room to pick up a silicone bait for almost any body of water. And in this regard, a number of models unique to Russia, gives this brand an advantage.

Natalia Laas, head of the Siberian Women's Fishing League, has the first category in fishing sport.

Quote: "As a fisherman, I specialize in the feeder and winter mormysk. Spinning I also really like, but I catch it much less often and only for two years. That is, in fact, in this type of fishing I just learn, and understand in silicone baits that are used when fishing for spinning, not very deep. So my review is an amateur glance that will be of interest to less experienced anglers.

So how does a lover choose a bait? Personally, I look at the reports of experienced fishermen on the Internet before fishing. As a rule, there in the photographs and in the text you can see what kind of bait they used. Looking at their catch, we can conclude how effective it is. Actually, this is how I choose what to take with me. At the same time, I am guided not so much by the brand as by color, size and shape.

Given this approach, Helios is good for a beginner in the first place a large assortment. This brand has a large selection, and it is easy for me to pick up the bait according to certain criteria without leaving the shelves in the store. Perhaps that is why I go fishing with spinning more often with Helios baits.

It is difficult to talk about the effectiveness of the bait with a small number of trips. Much depends on whether the color, shape and size are chosen correctly. Much depends on luck, especially among fans. And yet there is such a moment, because the fishermen are sharing baits with each other, changing, giving their companions to try something new. So even with such a modest experience of spinning, I happened to equalize and draw certain conclusions.

I can definitely say that the Helios lures performed well in the Altai region on Burla. The water there is yellowish-red, there is a lot of silt in it, and bright baits went well there. Especially I will note white, carrot and lemon with a red tail. The lures of Helios in bright acid colors showed themselves well on the Ob. Purple color went perfectly on perch. And both a twister, and a vibrotail.

In general, Helios are great lures that are suitable for amateur and professional spinning fishing.

HELIOS Baits – FREE! Testing for everyone

Write in the comments, who wants to get them!