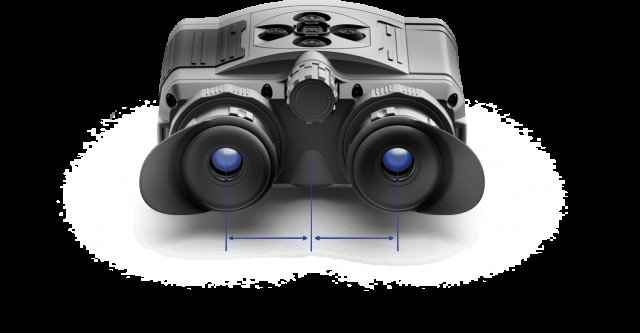 Dear fishermen, among you for sure there are lovers of hunting and observing the wild world. Therefore, we invite you to get acquainted with the unique development in the world of thermal imaging equipment – a range of Pulsar binoculars – www.pulsar-nv.com/eng/produkty/491/teplovizionnye-binokli.

The binocular scheme in night vision devices and thermal imagers is quite rare today, although the level of comfort and information when viewed through binoculars, when compared with a monocular, is incomparably higher.

The visual system of a person is binocular. As a biological species, humans are programmed to receive visual information with two eyes. And it is binoculars, and not a monocular, that allows us to fully reveal all the possibilities of our vision. Accolade is a pseudo-binocular in its form factor: there is one lens per pair of eyepieces.

This scheme does not provide full stereoscopicity, but it provides all the other advantages of binocular vision.

First, the image from the eyepieces, falling into both eyes, allows the brain to confirm the presence of real images and filter false ones. In other words, it increases the ability to notice small and weakly expressed objects.
Secondly, binocular vision increases the efficiency of “reading” low-contrast scenes by 40% – this is common in conditions of high humidity (during or after rain, fog, and so on). But the contrast of the image plays a major role in issues of detection and identification. With two eyes you will see halftones where with one eye is a solid monophonic background. The ability to distinguish small details increases by the same 40%, and the subjective color perception of the observed scenes improves. Being natural, observing with two eyes is much less tiring than one – the brain does not have to deal with an imbalance in the level of illumination of the retina of the right and left eyes.

Comfort with prolonged observation. The Accolade binocular scheme allows you to discover all the possibilities of human vision. Compared with monoculars of a similar technical level, Accolade provides the user with a higher ability to detect small or weakly expressed objects, greater efficiency when observing low-contrast scenes. Being natural to humans, observing with two eyes is less tiring than using one eye for observation.

Long detection distance. Early detection of objects is a necessity in many application situations, especially in the wild. Optical and electronic components of Accolade provide detection of a human body at a distance of up to 1800 meters.

Video and audio recording. Video recording or photographing of the observed image is activated with the click of a button. Accolade's internal memory lets you save hours of video and thousands of photos. Recorded files can be transferred to a computer or mobile device using a wired connection or via WiFi.

Full waterproof. With IPX7 moisture protection class (IEC 60529 standard), Accolade thermal imaging binoculars can be used in rainfall conditions of any intensity and can withstand short-term immersion in water.

B-Pack Power System The included quick-change rechargeable IPS5 power source with a capacity of 5 Ah provides up to hours of operation of the device in maximum consumption mode. Additionally, more capacious modifications are available (IPS7, IPS10 and IPS14), as well as a container for batteries and accumulators of the LR6 (AA) type.

Various color palettes. There is a choice of one of eight color schemes for displaying the thermal signature of the observed scene, both monochrome (the usual modes of “hot white” and “hot black”), and color, with the hottest and coldest areas highlighted in separate colors. The user has the opportunity at any time to switch from any color mode to the "hot white" mode, which acts as the main one.

The base model, the Accolade XQ38, has a resolution sensor 384×288 pixels and a lens with a focus of 38 mm, which provide about 1300 meters of detection distance and an increase in the range from 3.1x to 12.4x.
The more advanced Accolade XP50 features a higher resolution sensor, a lens with a 50 mm focus, a larger field of view and a wider range of magnifications.
And since 2019, modifications with an integrated laser range finder – Accolade LRF XQ38 and Accolade LRF XP50 – have been built on the platform of the thermal imaging binoculars mentioned above (in models with a laser range finder, there is no stadiometric range finder).

Sending from America. Rare wobblers Lucky Craft
Fast fishing in the city
What are these black dots on the fish? Where do they come from and what harm can a person do?
Tags: binoculars, imaging, pulsar, thermal, word