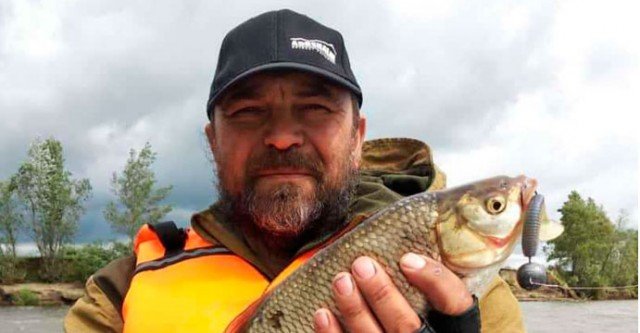 For all my fishing biography, or when there was no need for spinning for heavy jig, i.e. such that it would be possible to throw bricks, and I fished both on the Volga, on the Don, and on the Dnieper. But having moved to Siberia, on the banks of the Ob, I realized that we needed a wand of grams to 100, a strong current of this river with average depths asks for something from 50-70 grams, plus the weight of the bait itself ..

Throughout the past winter, I have been looking at spinning machines from different manufacturers in such a test, and here, by the way, they offered to test the Norstream Standard 802XH in a test up to 90 grams, I could not refuse.

So, first things first. The technical data and even the very name of the spinning indicate that it is far from an easy class and is intended for heavy jigging. Exterior performance is very good, it has not a bad design. But the case is quite simple.

It is 2.44 m long, very convenient for fishing from the shore, but for the most part, I consider it a boating tool! Test according to manufacturer data 25-90 grams. Story form is declared as fast. The weight of the rod, as the manufacturer claims, is 186 grams, to be honest, I did not expect such weight from the stick in such a test, the rod is very light and it is quite pleasant to make powerful jerk-like conductors with large weights. The handle is spaced, made with the use of EVA, the coil holder is twisted from above, and holds the coil dead, the forgrip is short and it is very convenient to put your index finger on the blank for greater sensitivity, although I am sure that this will be superfluous, since this stick has a very decent level In general, spinning assembled with dignity, for its price, without the influx of varnish, the rings are installed exactly, the junction of the knees is tight. I will not speak about the balance of the rod with a reel, because for every spinningist, the concept of balance, in my opinion, is his own. In my hand, with a reel Stinger Blaxter 3500, which weighs 280 grams, the rod is wonderful and I feel comfortable.

I will not describe in detail all the performance characteristics of the Norstream Standard 802XH, there is already plenty of information on the Internet, I'd rather tell you about my first impressions, about it.

To my great regret, it was not possible to fish with “Standard” in the conditions for which it was produced, due to the abnormally low water level in Ob. But I caught my fish on it.

And I wanted pikes of 10 kilograms and pike perches under the top five, but oh well, this lyrics are irrelevant to the case.
Arriving at the river and collecting spinning, I immediately made a dozen casts from the shore, in order to understand its potential in the casting distance and the applied force to it. Although the weight on the bottom is indicated at 25 grams, I put 20 grams and 10 centimeters of rubber … it flies, but the weight is not of this spinning. After put 40 grams and tighter 10-centimeter rubber, here is a stick, perhaps revealed. With an average effort, when casting, the bait boldly flew meters by 60, and if you invest, but with the correct technique of casting, then I think will fly away further. Well, of course, the extreme weight was set at 90 grams, and the same rubber. I will not say that everything is sad, I just have no experience with rods with such a test, and I was just afraid to invest in a cast, but with a smoother cast, the bait flies with dignified range. Although this is probably superfluous, throw such loads with this spinning from the shore. Used 20 libre 8-core cord.

Definitely Norstream Standard 802XH is not a coast stick, so I’ll talk about how Standard from the boat works, according to my feelings. At the depths of 3-4 meters, with the Ob course, the first touch of the sand bottom lure I felt in my hand with a weight of 23 grams and 10 centimeters rubber, was honestly surprised, of course, this is not a full TUK, but to understand about the contact of the lure with bottom is possible. But for such scales there are other spinning. Surely spinning works out, both tactile and visually from about 28-30 grams, and at 40 grams already gives to the "heels". With a weight of 40 grams, I basically caught the time allotted to me for the test. The first, yes, however, and the only fish, pecked when I was desperate to feel a bite on this udilka. The bite is clear, with a blow, due to the power of the "Standard" I didn’t have to cut, a slight wrist twitch, and a fish on a hook. Yaaazzzz !!!

With kilogram nucleus, spinning coped without straining, I even threw it into the boat without landing nets. When playing out, the knitting properties of the spinning, you described as average, although he did not merge the fish and did not tear her lips.

I tried to catch and with a load of 90 grams with a 13-centimeter rubber, but alas, not the time and place.

Summarizing, we can say that the Norstream Standard 802XH spinning is definitely interesting for heavy jigging and catching large fish, to my great regret, I did not manage to fully reveal its potential, but on my list of applicants for the working tool for further development of fishing on the Ob He took the top three!

All no tail, no scales!