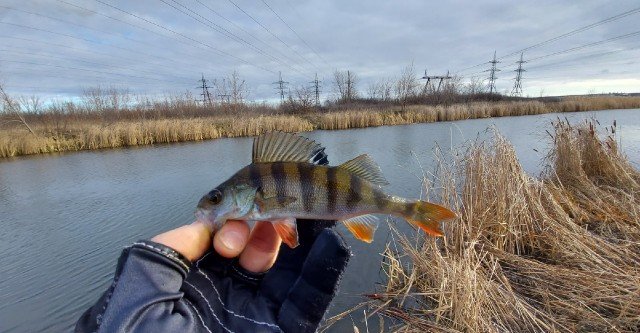 Any type of creature, imitation of larvae and other similar baits should be used more correctly when catching passive fish in order to awaken the appetite by "dancing" in place, thereby creating realistic behavior of insects in the natural environment. Yes, you can use them both as search baits and on an active perch, but for me there are worms for this that will be more effective.

Luremax Stone Fly is nothing more than an imitation in the geometry of the spring larva, made of dense silicone with many limbs, a head and a bifurcated tail. Two types of sizes, 45 and 65 millimeters, 10 and 8 pieces per pack and 9 color variations. The Stone Fly, 65 millimeters in length, lay for a whole year in the package, but the younger model periodically acted in the lead role, and today it will be discussed in fact.

To be honest, I, as a person who is in the first stages of mastering microjig fishing, had a certain skepticism looking at such a bait, but the love of experiments played an important role. So on one of the fishing trips in June, during the experiments, the line reached Stone Fly. Having removed the worm from the single hook, I carefully planted a freckle due to the flattened body of the imitation.

With each new bait posting, I first increased the pause, and then tried to diversify the support, while carefully focusing on the tip of the rod and listening to the tactile sensations from each “breath” of the perch on the larva transmitted to the finger through the rod form. Things went well, the striped liked this game and he began to chew slowly on silicone without suspecting fraud. The perch was caught, but the rate of fishing fell, and I returned to the worms again, deciding to leave the freckle the next time.

Several times I returned to fishing on Stone Fly, but in my opinion it showed itself best in the beginning of spring – to see the time of that very spring, just real. On a small river with a weak current, I used a cargo weight of 3.5 – 4 grams, and sometimes I used jig rigs with a load of 6-7 grams for comparison, and judging by the caught perches, jig rigs better provoked perch to bite.

In conclusion, I’ll say that Luremax Stone Fly silicone is indestructible, which means that one pack will last for a long time, it’s not included in the top 3 for the best baits, but it definitely should be in the box, All LF, Respectfully Sergey Egoist.