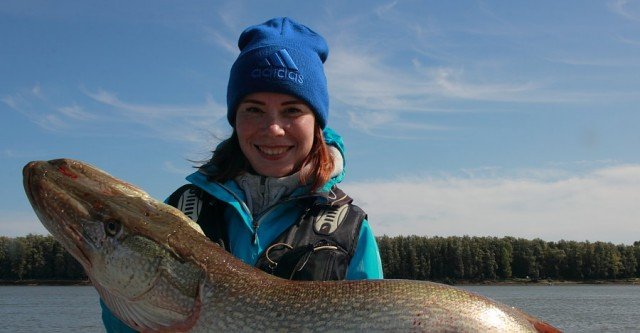 How to catch a trophy pike …

The path to the trophy pike.


Now about everything in order.

A few words about heavy jig. Too large jig baits for catching a trophy pike are simply not there.

At the slightest opportunity, try to let go of the trophy fish. And may luck always be on your side!

Pike is the most accessible and popular prey for a spinningist.

But what is a Trophy Pike ?!

It can be said – each has his own dream, one fisherman is dreaming of a banal "treshka", another has a few "dozens".

And yet, it seems to me, it is possible to take the notorious meter for a point of reference. Meter pike is about six kilograms of live weight.

The starting point was taken, and where is the limit? And there is no limit.

I recently read on the Internet that on the set of the next plot of “cool place”, a trophy pike was caught, I quote – “Fanged pulled almost 40 kg, or rather, 38 kg 700 g”. I can not believe, although there is no reason not to trust the source of information.

Of course, this trophy pike was taken on the Volga, and we are talking about the Ob River, more specifically, about the Suzunsky region. But believe me, and decent specimens are found here. I had to deal with a trophy pike, but already twice when vyvazhivanii trophy, I was just stunned.

The impression was that the submarine was on the hook! In both cases, the outcome was one – a hook unbent.

The path to the trophy pike.

may not be simple and long, but endurance and patience will surely lead you to the trophy. From my personal experience, I know that if you strive to catch a trophy pike, you are guaranteed to succeed.

Once, having set a goal to catch a trophy specimen, I caught seven test pikes for four trips to fishing, from six to ten kilograms each. One fishing trip was especially memorable when three pikes were caught – for six, seven and eight kilograms, respectively.

Why is it so difficult to catch a trophy pike?

While the pike of the average size comes across quite often? Firstly, the number of meter-long pikes in the pond is not so great, and secondly, they eat less often. While smaller individuals feed heavily, increasing body weight. The trophy pike is saturated quickly, swallowing a pair of fish weighing 1 kg, rolls under a favorite snag, where it calmly digests food. This process can last several days, only after that the predator becomes active again, but again within a short time.

What are the components of success in the trophy hunt?

The second is proper equipment and ability to use it.

The third is a little luck and a lot of patience.

Now about everything in order.

Knowledge of the reservoir on which you will have to look for approaches to the trophy pike will greatly facilitate the task ahead of you. If you do not know the reservoir, you can not do without the ability to "read" it. Straight sections of the river alternate with turns. Here on these turns should pay close attention.

The concave part of the coastline of the river is steep, the strong current washes the shore, undermining the roots of the trees growing on it – this is a channel pit. In such a hole a trophy pike finds shelter under the trunks of fallen trees from the shore

As a rule, the bank opposite the pit has a convex coastline along which the sandy and shallow part of the river is located.

Next you need to pay attention to the sections of the river preceding such turns. If there is another turn around the turn of the river, then perhaps the river at the end of the sandy shore will wash up the sandbar that goes deep into the river. This is a very nice place. The sandy spit beats off the current from the shore, forming a backwater. Usually, fodder fish accumulate in them, and pike necessarily visits such places.

If there is a long and rectilinear section of the river between the pits, look for a place on it with a weak current and accumulation of feed fish. This task will facilitate your echo sounder.

So we delimited the river, given the direction of flow. It is easy to understand that the beginning of the pit is the entrance, and the end of the pit is the exit. On straight sections of the river with a weak current, as well as in the backwaters with an almost complete absence of current, plankton is concentrated and, as a result, white fish, which in turn is an excellent food base for trophy pike. It remains a practical way of trial and error to find the path along which the trophy pike goes to the pasture.

This way is not easy, but fishing is so interesting.

To search for promising places for fishing, one has to travel a lot around the reservoir. I can’t imagine hunting for trophy fish without a motorboat equipped with an echo sounder and satellite navigator.

I am not an advertising agent for fishing gear manufacturers, and therefore I don’t name trademarks that I prefer. However, I will say that I like American spinners, and Japanese coils.

Spinning is desirable to have a quick build, with dough on the fishing line 20-25 lb and the top dough for the bait 40-50 gr.

When choosing a coil pay attention to the strength of the design and reliability of the mechanism. Size not less than 4000 by Shimano classification.

The cord is completely fine with the braided Power Pro cord. Durable, with a classic weave cord, it does not have a thread sheath, so that retains its original qualities for a long time. And this is not an advertisement. For trophy fishing I use a diameter of 0.28 mm, the color is lemon yellow.

Bait is a vast subject.

Floating, sinking, suspenders. Natural and fancy color of what is not.

A few words about heavy jig. Too large jig baits for catching a trophy pike are simply not there.

The bigger, the better. Restriction on the size and weight of the bait imposes the actual method of fishing. The tallness of large silicone baits makes it difficult to make a distant and accurate cast, and the wiring of such baits is unfortunately difficult. The maximum size used by me when fishing for jig vibrotails, fifteen centimeters. When searching for pike on the river with a weak current or when catching plumb, I use silicone vibrating tails 25-25 cm long.

Often I use a hinged rigging, a “cheburashka” head and a twister mounting on a twin, if there are no snags in the place of catching, then on a tee.

I use heavy wobblers, about 40 grams. The lead, exclusively from nichrome, with a diameter of 0.5 mm. Swivels and carabiners do not apply, only twisting. If possible, it is necessary to eliminate weaknesses.

Here you are already in the boat, armed with knowledge and powerful spinning. Before you enter the channel pit. Your echo sounder shows a depth of 4-5 m. Somewhere here there is an invisible path along which the predator emerges from its refuge and makes a robber raid on a peaceful fish.

And may you be lucky, may your expectations be not long. But remember, when there is a contact, a powerful undercut must follow. It is necessary! You need to try to "tear" the silicone through the brush of pike teeth.

When vyvazhivanii hurry is not worth it, but keep intimate contact with the predator. You should steer, not she. Sometimes she does jerks of terrible power that can crush powerful tackles. You need to be able to parry, use the friction brake and at the slightest opportunity take control into your own hands.

In order to raise the trophy pike on board your boat, you need a large and durable landing net or hook.

When removing a hook from a jaw of a trophy pike, take care of your hands, use the tool.

At the slightest opportunity, try to let go of the trophy fish. And may luck always be on your side!

Should I buy reels and spinning rods over the Internet?
Esmeralda's story.
The second ice | Fishingsib
Tags: catch, pike, trophy