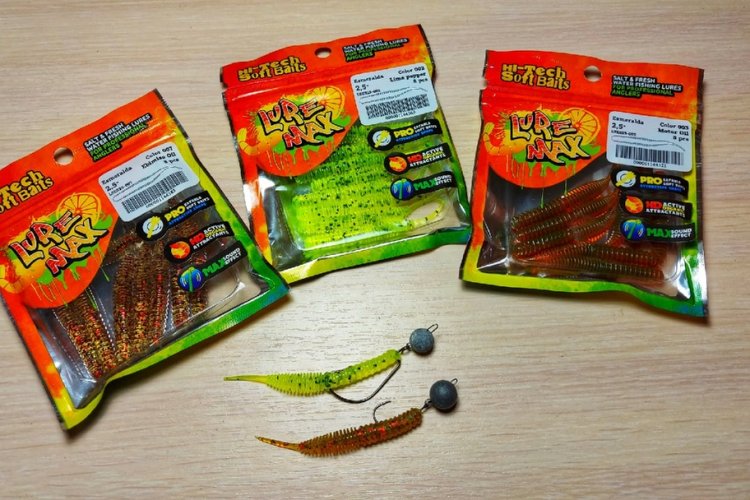 From my photos in reports and stories on Instagram, it is noticeable that I really like fishing for perch, and with the advent of the microjig rod, such fishing began to take place with even greater interest and pleasure. Summing up the results of the 2020 liquid water season, I would like to tell you about the bait that I have been using since 2018, but have not yet introduced you to it.

The Luremax Esmeralda worm, although you can call it a slug, which will also be unmistakable, is 60 millimeters long. The body of the lure is dense with ribs, after 2/3 of the length there is a noticeable narrowing with a transition to a needle tail, which, in my opinion, awakens the appetite of the striped fish. It can be equipped in different ways depending on the fishing conditions, but being frank, I often caught using the articulated connection with a single hook. For the sake of the experiment, I repeatedly increased the weight of the load from 3 to 7 grams, except for cases of fishing at a depth of less than three meters, this did not noticeably affect the number of bites. So if you don’t have a microjig rod, then light up to 10-12 grams is perfect.

As for the color schemes, the 60 mm model has only 8 of them, but this is quite enough, since they are the most popular and demanded by anglers. For two years of fishing, I tried almost all the ranges, but my most popular color turned out to be 007, which is not surprising – the classic perch fishing. If you focus on the game of the bait, then there is nothing fundamentally new, classic tossing with minimal pauses for quick fishing of the water area. If the location of the perch is already determined, then it makes sense to experiment with play and pauses.

Initially, I thought that the perch would quickly break the needle tail of Luremax Esmeralda, but as practice has shown, no such cases have been identified in two years, which indicates the high resistance of the bait to predator attacks.

A big plus in the symmetry of the bait, that is, there is no need to select and maintain orientation when piercing with a hook. All that remains is to choose a hook that fits the size of the silicone, but I often use a small hook to give the bait more freedom when tossing.

Unlike other worms, for example the same Stitch Stick, Esmeralda more and more often cuts off frank trifles. That is, if your main goal coincides with mine, namely, to catch an edible fish, and not just get away from zero, then you should try it on your fishing. A frequent visitor to LureMax Esmeralda, of course, is pike perch, although its size was always unacceptable for catch, so after the photo everyone was allowed to grow further. It was not possible to catch pike in two years, or maybe it simply was not at the point at the time of fishing. Who knows, maybe next year will bring a toothy one, but for now the main object is, of course, a perch.

This is the story of Esmeralda, the bait took pride of place in my box, leaving only positive memories. There is another size in the line, but more on that next time, but for now Everyone, bye, Sincerely Sergey Egoist!