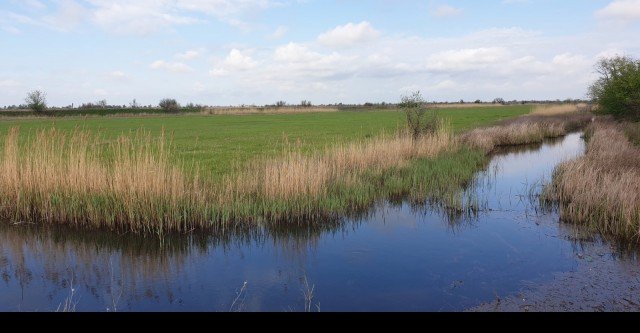 Behind the pike on the canals

As long as there is a holiday weekend there is the opportunity to go fishing with friends, walk like a walk, and maybe catch a pike. Yes, and the weather was excellent, only a little scare, which was forecasted a little rain, this is not a hindrance, as raincoats are always with you just in case. Two crews advanced on water meadows to scout pike in canals.

In spring, when the water level in the river rises and flood begins, there is always water in the meadows, sometimes even fishermen with a net and go catch a crucian who went to spawn. There are a lot of water, boots wades in time for the place will be.

Arriving at the place, everyone began to collect their tackles and work lures, for someone it’s deep-well wobblers, I took a working popper, it’s just good to catch with different lures, it’s easier to understand what pike needs today, and since the water level is higher and understand in what horizon it will be.

Four fishermen began searching for pike and baits flew into the water as if shelling, so of course it is very efficient to conduct searches, but there is also a lot of noise. The first couple of hours we just walked and there was not a single exit, not a single bite. Changed dramatically places, from a shallow depth went to areas with depths of 2-2.5 meters, also to no avail.

When they came to the farthest canal, the water here was cleaner but darker and a meter and a half deep, here at least the little pike came out, my friends and I, and most interestingly, it popped up right under my feet when the bait was already pulled out of the water. But at the same time, she didn’t react to poppers floating along the coast a meter from the reeds, strange behavior. Equipping a bright acid wobbler, a small Sagami 65SP shad I got the first capture, maybe it worked the wobbler, or maybe not, the time was about 15 hours and maybe it was a way out.

As soon as we were delighted, thunder rang out in the distance, the clouds were gathering, but so far it was far from us we continued searching for pike. In another place where there were snags and branches of trees along the coast, duckweed was also present on the water, having thrown the bait right on the border and having made just a few jerks again hit and a little bigger pike on the coast.

A few minutes later clouds overtook us, a strong squally wind blew and heavy rain poured, which until we went to the cars did not leave a dry place on each of us. Heavy spring rain with little hail drove us out of the pond, but we are still happy as it turned out to be at least a bit of fishing and catching toothy.

With ultralight and wobblers | Fishingsib
Wonderful closing of the season. They hit the jackpot. Fishing / Hunting
Yeti Angler. Not every angler will understand the meaning of such fishing. Right? Loach 2019.
Tags: behind, canals, pike