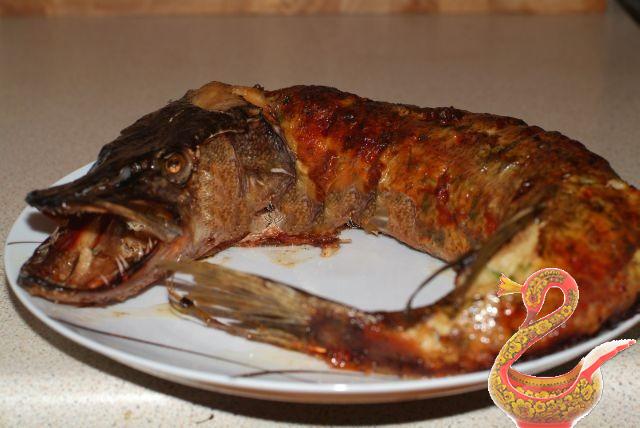 To cook stuffed pike quite simply, if you treat this process with due care. Distinctive flavor Tina will not be as noticeable if added to the dish the vegetables. Another secret ingredient – add a piece of bacon.

When selecting a pike, you should pay special attention to freshness. We recently caught fish gills are pinkand the mucus covering the carcass, different transparency. It is not recommended to stuff a pike weighing more than 1.5 kg because its harder to clean so to keep the original look.

Cleaning the fish from the scales , you should try not to damage the skin. The gills are removed with the help of kitchen scissors.

Then you need to make an incision pike near the lower fin and head area. With a sharp knife to cut the film separating the inside. The guts can then be removed by hand, but carefully, so as not to damage the gallbladder.

In the case of accidental damage immediately to immerse the fish in cold water, add a spoonful of salt and two tablespoons of vinegar. Holding the carcass in the solution for half an hour, rinse thoroughly under running water.

Cut fish need to fight off with wooden tools – at least 10 times on each side of the carcass. Then cut off the head and carefully remove the skin, cutting with scissors upper and lower fins on a course of action. All the fish is ready.

4. From fillet to prepare forcemeat, to which add the vegetables, soaked bread, a couple of yolks. Season with salt and pepper to taste.

5. Whip whites into a thick foam, which will heightens the lightness to the meat. All to move.

6. Stuffed with minced skin and mend it with natural thread so that the carcass looked solid.

7. On a baking sheet, greased with oil, put the beets and carrots. They are usually cut into slices, not grate. Place the fish with the head on top of vegetables and send in preheated oven (180 degrees) for 45 minutes.

Council. Instead of the traditional vegetable, you can cook the mushroom stuffing, which gives the dish a special charm.

Slice the mushrooms and fry with chopped vegetables, and then mix with mince and egg. Stuff the pike, not forgetting to season with salt and pepper. Next, bake the same way and at the same temperature.

Ready pike decorated with slices of lemon and cranberries, spreading them over the carcass, and in the eye of the head was placed a dark olives. Optionally, you can decorate the carcass with mayonnaise using a pastry tool. Serve dish made in chilled form.

How to cook stuffed pike in the video below:

Winter fishing. Fishing on first ice
Where and when is the best time to catch carp on corn?
The fly-fishing – tackle, casting, fly
Tags: recipe, stuffed